It’s taken on a life of its own. 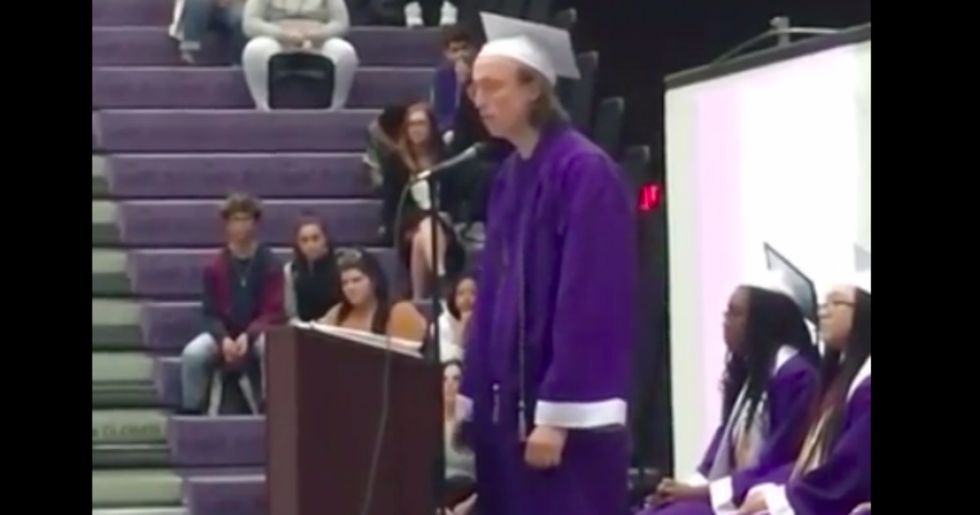 “And to you, underclassmen, who have to endure all the things the school throws at you for two or three more years. A school where the administration closes their eyes to everything that happens at the school. Their school. The sexual assault, the bullying, the depression, the outcasts. They do nothing to fix it."

High school senior Charles Chandler made his mark when delivering his graduation speech at Heritage High School on Wednesday, June 5th. The student, who made multiple references to the abuse he and others allegedly endured while attending the Vancouver, Washington-based school, used this platform as a means of expressing a disheartening reality many allegedly face on a daily basis.

Upon listening to Chandler's speech, it's clear from the rousing response from his peers that the senior's words resonated. Look, this is high school. Ask anyone about their own school experience and it probably won't take long before you, too, will hear stories about harassment, bullying, or even sexual assault.

As serious as these claims are -- the higher-ups at Heritage High School allegedly turned a blind eye to a number of such instances -- it seems that the institution is more-so focused on preserving their image in the end. According to Katu2, after Chandler decided to "go off book" from his pre-approved speech, the school revoked his invitation to walk in this year's graduation ceremony.

So #HeritageHighSchool got mad about #CharlesChandler calling out the bullying and sexual assault they turn a blind… https://t.co/m18GyflQRQ
— Jess (@Jess) 1560010178.0

“I don't think they should be capable of stopping me from walking at graduation for expressing my First Amendment rights," Chandler said, before revealing that multiple peers reached out to him with their own stories of abuse and the lack of action taken by the school's administration.

“I tried getting help and there wasn't really much help given," revealed Ethan Wheeler, Chandler's close friend.

The young man chose to stick by his words, even after the school's administrators offered him "a restorative solution" in order to get his walking privileges back, and his father Shane has stayed 100% in his son's corner. “I think Charles is learning 100 times more from his stand and looking out for other people," he said. "Hopefully, this will cause a little change."

Will Chandler's call-to-action spark any sort of progress? That remains to be seen. But his words did have a big enough impact to spark the creation of a petition at Change.org. As well, his protest speaks to a bigger problem that teenagers all across the country are dealing with. Simply put, High school bullying is on the rise. So is teen suicide. And while we're not posing the notion that one directly correlates to the other … there is definitely a connection here.

@JonathanTurley Sadly we could remove Heritage High School and insert nearly any other school and the story would b… https://t.co/RSgRo9qplW
— Steve VanSky (@Steve VanSky) 1560010791.0

With so many obstacles high school students face, schools seem to be looking less and less as sanctuaries for learning, and more as places where safety is constantly put into question. Is there anything administrators can do to ensure kids feel safe inside these walls? Simply listening to their worries and taking their reports of abuse seriously is probably a good start.