Ultra-difficult color test is so hard only 1% of people can get a perfect score.

The average score is 6. 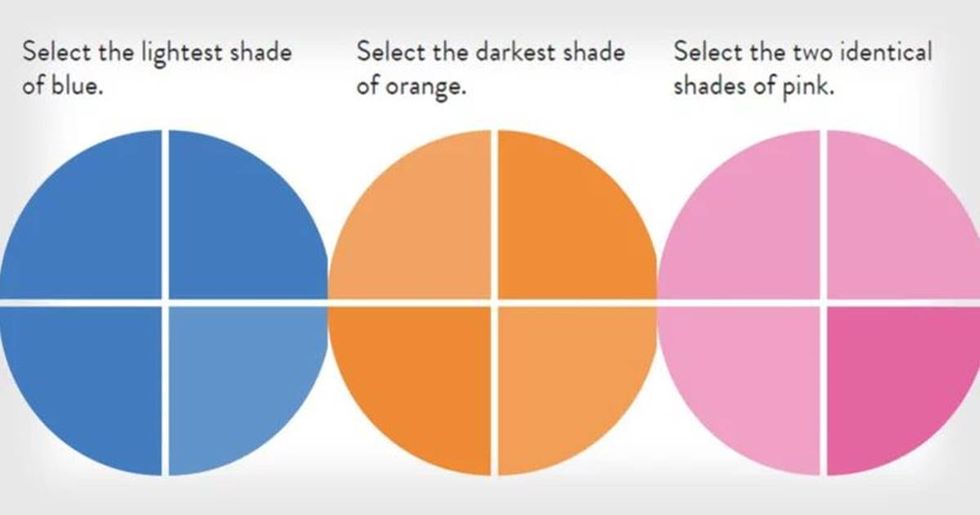 Lenstore, a UK-based eye care company, has created an ultra-difficult color test that’s so challenging, the retailer says that less than 1% of the first 2,000 people who took it got a perfect ten out of ten.

The test involves distinguishing between different hues of the same color and putting the colors in the correct order on the spectrum.

Lenstore says that women fair better than men on the test. Females scored an average of 57.7%, while men obtained an average of 53.8%. These results closely mirror the current scientific data on sex and color perception.

In a 2012 study, Israel Abramov a psychologist from Brooklyn College found that males are less adept at perceiving colors in the center of the color spectrum, such as yellows, greens and blues. The same study showed that men were better at distinguishing quick-changing objects from afar.

Color blindness is also much more common in men. According to the National Eye Institute, 8% of men and 0.5% of women are color blind.

It’s believed that these differences in perception stem from humans evolving in hunter-gatherer societies in which men tracked distant objects and women focused on things up-close.

Age is also a major factor in the ability to perceive distinctions between colors. People between the ages of 31 to 35 scored the best with an average of 60%. While people ages 81 to 89 averaged 38%.

These results also gel with current scientific research. After the age of 70, the number of people who have trouble correctly perceiving color increases rapidly. “We find the color discrimination declines with age and that the majority of color defects among the older population are of the blue-yellow type,” Marilyn E. Schneck, PhD, and colleagues at The Smith-Kettlewell Eye Research Institute wrote.

Here are the top ten countries in terms of color perception, according to their report:

While there was a significant difference between numbers one and ten on the list, there is no solid research that says whether people from different parts of the world are any better or worse at perceiving color. But there are differences in how colors are labeled.

For example, the word “orange” didn’t exist in the English language until orange trees were brought from Europe to Asia around the year 1500. There are also some cultures that speak unwritten languages that don’t have a word for color.

“There are tons of languages that have words for big and small, or hot and cold, without a word for size or temperature. Most unwritten languages don’t have words for abstractions. You don’t need ’em,” anthropologist Paul Kay said according to Sapiens.

Click here to take the test or on the link below.