After he admitted to harassing women at Planned Parenthood these unstoppable Internet vigilantes fought back.

He tried to scare the women, but instead he inspired them to fight back. 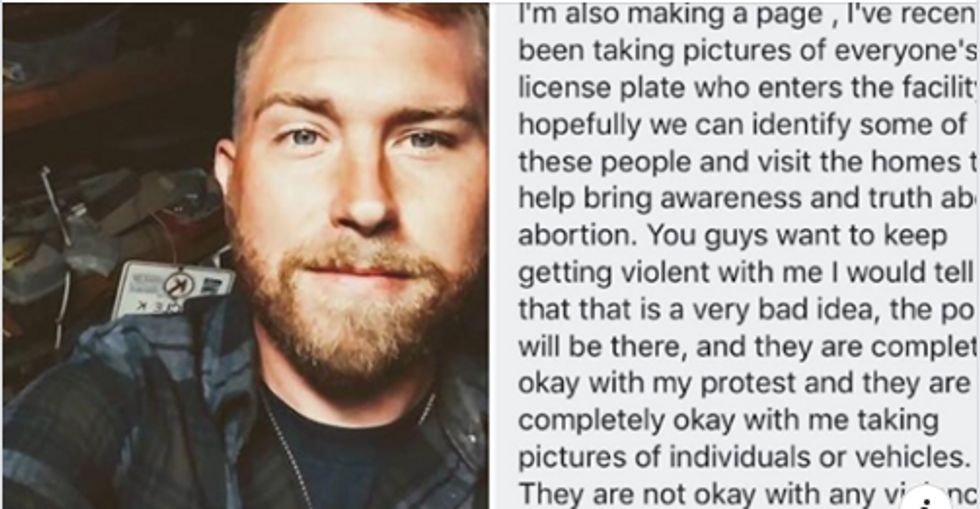 Isn't it weird how the "pro-life" movement seems to attract some of the worst, angriest, slimiest slimeballs on the planet? It's like this platform isn't actually about saving lives—but instead about controlling women. Case-in-point: a man named Jordan Hart in Tucson, Arizona, announced on Facebook recently that he would be taking photos of women's license plates as they entered and exited the local Planned Parenthood, claiming that he would use that information to "go to people's homes" and "educate" them about abortion. This is a terrifying breach of women's privacy and safety not to mention supremely obnoxious.

According to the Facebook group, Planned Parenthood Baby Parts Emporium, the local police were contacted but said there is "nothing they can do about it." So in an example of vigilante Facebook justice, the group shared the man's photo along with a PSA to women:

This man’s name is Jordan. He is taking photos of license plates and photos of people entering and exiting planned parenthood in Tucson, Arizona. According to him, he is going to use that information to go to peoples homes to “educate them” on abortion According to Tucson PD, this is a non-issue and there is nothing THEY can do about it until it’s essentially too late.

So I’m giving a PSA to anyone in the Tucson area who goes to planned parenthood to keep an eye out for him. He has openly admitted his intention to criminally harass, stalk, and intimidate people. Keep yourselves safe and keep an eye out for this guy following you or photographing you and your vehicle.

The group also followed up by posting this screenshot from Hart's own page, confirming his plans and highlighting his dangerous nature:

Wow, this guy seems nice, huh? Really glad he's on the side of "life."

In response to this human douchenozzle's threats to women, commenters are sharing their gratitude for Planned Parenthood, which actually offers women a LOT more life-saving services than just abortion. The comments highlight why this guy's tactic for "educating" people is not only dangerous but extremely misguided:

And so did this woman: public shaming!

Before you blame her for sharing this extremely personal tidbit of information about Jordan, please remember that he a) doesn't respect women's privacy. And b) she is just "educating" the people!!!!! Thank you for your service to the community, Savannah!!!!!

Fortunately, this guy reached out to the police, who claimed to be "monitoring" Jordan and his Facebook feed:

Although I'm dubious that the police will do much to help, at least these Facebook vigilantes are on the case, spreading the word (and his photo) to warn women to be careful. If you're a woman in Tucson, Arizona, or elsewhere, seeking reproductive health services, we hope you stay safe. From this dangerous man and also from his teeny tiny weener.

This article originally appeared on Someecards. You can read it here.