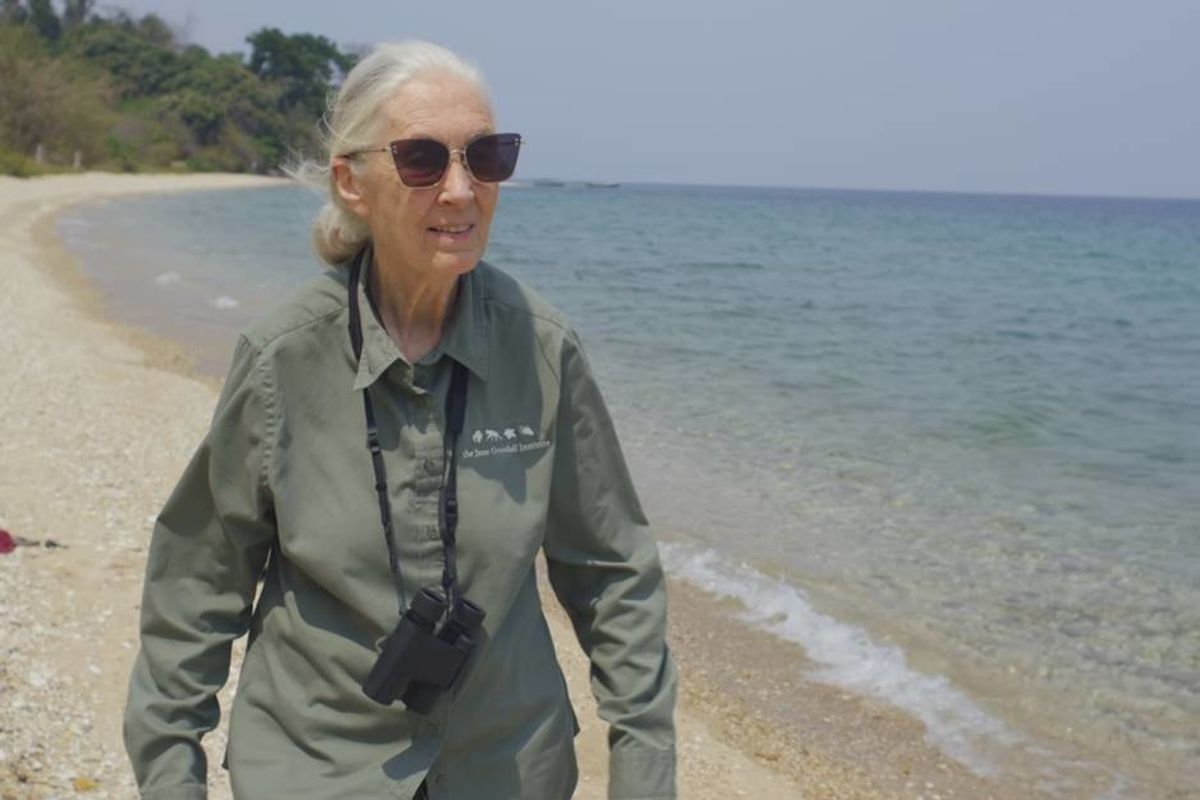 Primatologist and anthropologist Dr. Jane Goodall's lifetime of research and activism has fundamentally changed how we see the animal kingdom and ourselves. Her work bridged the gap between humans and chimpanzees, revealing a connection to our primate cousins that's far closer than we ever imagined.

In 1961, at the age of 27, she made the landmark discovery that chimpanzees use tools, a skill that humans believed separated ourselves from the rest of the living world.

From 1960 to 1975, she spent most of her life studying chimpanzees up-close in the Gombe Stream National Park in Tanzania. Her work fulfilled a childhood dream that once seemed impossible for a girl born in 1930s England.

"Everybody laughed at me and said that I'd never get there. It was far away, we didn't have money, and I was just a girl," she told GOOD.

During this period, she changed how the world thought about chimpanzees by discovering they were omnivorous and have complex and highly developed social behaviors.

In 1986, at a scientific conference in Chicago, speakers made it clear that the chimpanzee's habitat in Africa was being destroyed, threatening the species' survival.

"I went to that conference as a scientist, by then I had achieved my PhD, and I left as an activist," she said. "There wasn't any decision, it just literally happened inside me. I went in as this one thing and emerged as another."

In 1988 she founded the Jane Goodall Institute UK.

At 86, Dr. Goodall still travels an average of 300 days a year speaking around the world about the threats facing chimpanzees and the environment. She also runs the Roots 'n Shoots program where tens of thousands of children in 100 countries work together to make the world a better place.

In celebration of Earth Day 2020, National Geographic is airing a two-hour documentary Jane Goodall: The Hope, which focuses on her four decades of advocacy work for chimpanzees and depicts the next chapter for generations to come.

As part of GOOD10: Earth Issue, we had the opportunity to speak with Dr. Goodall about man's relationship with nature, COVID-19, and Netflix's controversial documentary series, Tiger King.

GOOD: A major theme in the documentary is the disconnect between human beings and nature. Why do people deny this fundamental fact?

Dr. Jane Goodall: A lot of it was originally due to religion because Man was given dominion over the birds and the bees and this and the other. People translated that as they could do what they like. They were superior. In fact, it's a wrong translation of the original Hebrew word which was "stewardship" rather than "dominion." They're very different.

Also, more and more people are now living in cities so it's very hard for some children to connect with nature. But if a young child gets the chance, you find that almost all of them are absolutely fascinated.

That's what we're doing in our Roots 'n Shoots program. Helping to connect children with nature and to understand we're part of the natural world, not separated from it. We depend on it for food and water and clean air.

And we continue destroying it to our peril.

GOOD: How did this lead to the current COVID-19 pandemic?

But people didn't listen, they didn't learn the lesson and they went on eating bush meat at the African markets and at the wet markets selling live animals in Asia. There's also hunting which is all over the United States and parts of Europe.

There are also intensive animal farms where animals often live in horrible, cruel, and unhygienic conditions All those things are a perfect chance for a virus to jump over to a human.

GOOD: Do you think this will inspire people to wake up and fully grasp the idea that they are interconnected with nature?

JG: I'm praying. I think many people I've spoken to see this as a point in time when we begin to change the way we do business. Unfortunately, with some of the leaders in power in many countries at the moment, I'm really afraid it'll be back to business as usual.

Hundreds and hundreds of people have now, for the first time, have realized what it's like to live in a city and to breathe the air without getting sick and to see the stars at night. Nature's been given breathing space and it just shows how good it'd do if we weren't here.

Hopefully, along with our Roots 'n Shoots youth program — that's developing special values in people — we can change course before it's too late. The climate crisis and this pandemic should make people wake up.

If you watched #TigerKing on @netflix you may have noticed captive primates, including chimps! Very heartbreaking.

GOOD: The most popular show in Netflix history is Tiger King about Joe Exotic, a zoo owner who held dozens of captive tigers and a pair of chimpanzees.

GOOD: At the end of the documentary, he laments that he kept two chimps in cages that were separated from each other by a see-through fence. They were finally released to a sanctuary. Can a chimp ever psychologically recover from that type of abuse?

JG: Usually, it will take time and knowledge so that you introduce them gradually to the right, non-threatening individuals. It hasn't always worked but it can be done and certainly should be done. It's like putting a human being in solitary confinement. It's utterly cruel.

Now, a tiger has been infected with COVID-19. This close connection with wild animals is utterly cruel. Animal trafficking is so bad. I'm going to have to watch it, I suppose, because I think I'm going to be extremely angry to see it.

People see these little chimpanzees in advertising and say, "They look so cute." They want to buy a baby chimp and you can still buy them in the United States. They usually have them until about eight and then they can't cope with them anymore and they go off. I don't know where they go.

JG: They used to go to medical research which is like jumping into hell. That's finished though, thank goodness.

GOOD: Do you have any final thoughts to share with our readers for Earth Day?

JG: Every single day we live, we make some impact on the planet and we need to make ethical choices, thinking about the consequences on future generations. What do we buy, eat, wear? Where did it come from? That will start moving us towards a better world.

From Your Site Articles
Related Articles Around the Web
environment
Trending Topics
THE DAILY GOOD
Start your day with something GOOD.
Trending Stories
Culture