A fireman’s children wrote him a hilariously honest obituary he would have loved.

After reading it, you'll wish you had met the guy. 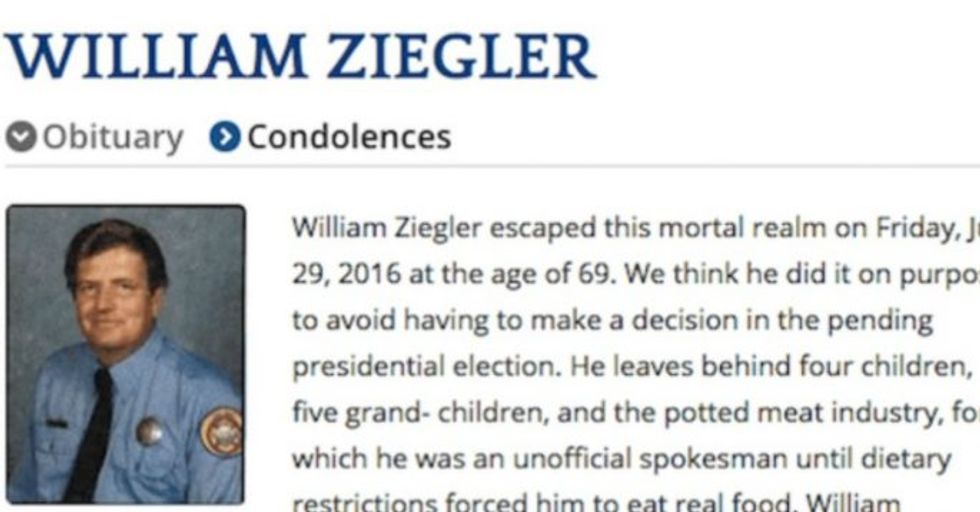 After you’re gone, people will probably forget the exact things you said to them while you were alive, but they’ll never forget how you made them feel.

Unfortunately, when people write obituaries that sum up a person’s life they’re often just a chronological list of factual details of their lives such as where they lived, where they worked, and how many children they had.

While those facts are important, they don’t really explain the type of person the deceased was or how they made people feel. An obituary for fireman William Ziegler of New Orleans, Louisiana has attracted a lot of attention for how it hilariously summed up the life of a man who was a real raconteur.

Zeigler’s daughter, Sharah Currier, said that he used to read funny obituaries to his children, so they decided to write one that would make him laugh. “He would have loved this,” she told the Times-Picayune. “He probably would have forwarded this obituary to us.”

Zeigler began his career as a volunteer in the U.S. Navy.

William volunteered for service in the United States Navy at the ripe old age of 17 and immediately realized he didn’t much enjoy being bossed around. He only stuck it out for one war. Before his discharge, however, the government exchanged numerous ribbons and medals for various honorable acts. Upon his return to the City of New Orleans in 1971, thinking it best to keep an eye on him, government officials hired William as a fireman.

He then continued his life of service by joining the fire department.

After twenty-five years, he suddenly realized that running away from burning buildings made more sense than running toward them. He promptly retired. Looking back, William stated that there was no better group of morons and mental patients than those he had the privilege of serving with (except Bob, he never liked you, Bob).

Ziegler’s children believe that he’s in heaven with his alcoholic dog.

Following his wishes, there will not be a service, but well-wishers are encouraged to write a note of farewell on a Schaefer Light beer can and drink it in his honor. He was never one for sentiment or religiosity, but he wanted you to know that if he owes you a beer, and if you can find him in Heaven, he will gladly allow you to buy him another. He can likely be found forwarding tasteless internet jokes (check your spam folder, but don't open these at work). Expect to find an alcoholic dog named Judge passed out at his feet.

His children end the obituary stressing the fact that he’s actually dead.

Unlike previous times, this is not a ploy to avoid creditors or old girlfriends. He assures us that he is gone. He will be greatly missed.

You can read the whole obituary at the Times-Picayune.