Teenage girl shamed for her ‘distracting’ outfit fights back in a very funny way.

“[Because] she has a figure she was told she had to change.” 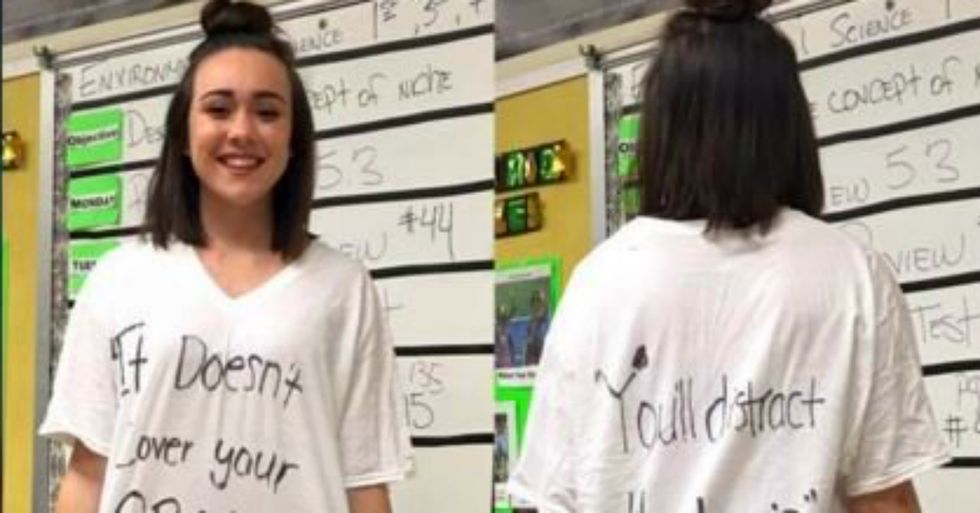 This article originally appeared on 05.17.19

A Lawton, Oklahoma, student who goes by the Facebook user name Rose Lynn had the last laugh after being sent home from school for wearing an outfit deemed “distracting." Rose Lynn believes her outfit attracted the attention of school officials because of her figure.

She proved it by posting a photo on Facebook of her modest outfit, which consisted of black leggings, a t-shirt, long cardigan, and boots. In her post, she wrote that she was sent home “because I'm developed farther than the average girl my age," and because she's a “CURVY woman." Rose Lynn also thinks the appropriate response shouldn't have been to tell her to cover up, but to teach boys to “to respect the boundaries of young ladies."

Her father, Lance Miles, agrees with her. “If she was built like a board or as round as a ball she wouldn't have been sent home but [since] she has a figure she was told she had to change," he said in the comments of her Facebook post. “This is 100 percent on [Lawton Public Schools] because they have left the rule up to interpretation. She has been taught that if you believe in something, do what you must and be prepared for the consequences. She has done that."

“So today I was sent home from class, after being in school for two hours, for my outfit. Because I'm developed farther than the average girl my age, I am required to go home and change... Because I look like a CURVY woman and may distract young boys, I have to miss class and change my outfit. So once again, society has failed to advocate young ladies, by confining them in a box, where they are stripped from their sense of self respect and self expression, rather than teaching young men to respect the boundaries of young ladies. My response: #Feminism #YoullDistractTheBoys #SocietyIsFailing"

On the day Rose Lynn was sent home, she was due to take a 20-minute algebra exam. She asked school officials if she could take the test before changing her outfit, but her request was denied. So the next day, she got her revenge. Rose Lynn returned to school wearing an oversize t-shirt. On the front she scribbled a quote from school officials in black Sharpie, “It doesn't cover your crotch"; on the back, “You'll distract the boys." That day, Rose Lynn was called to the office and sent home again. This time it wasn't for her outfit but for not wearing her student I.D., which she had left in the classroom after being called to the office.