He turned the tense moment into a moving defense of free speech. 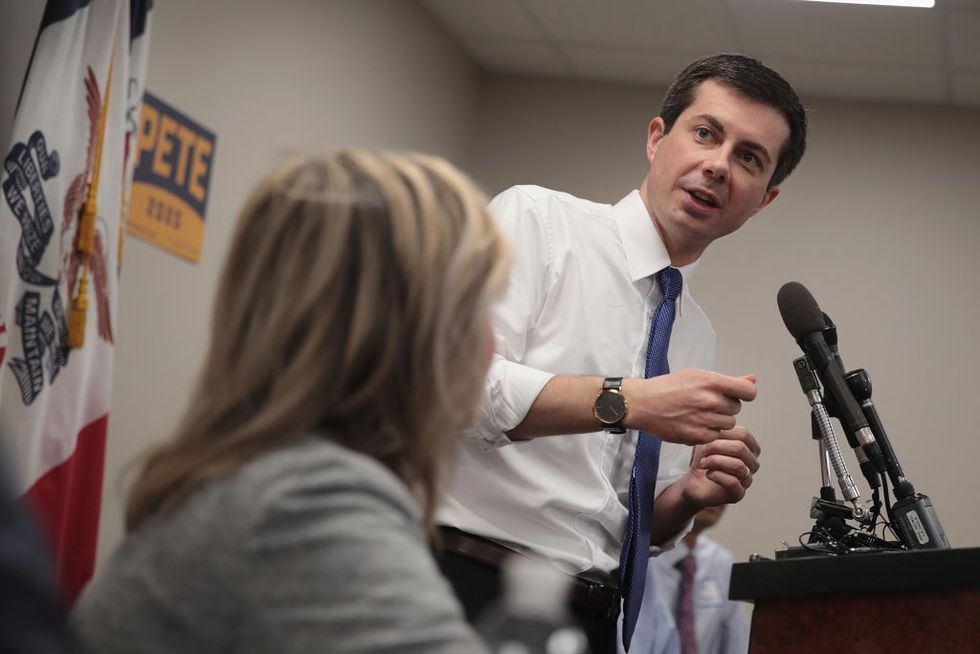 One of the most impressive aspects of Pete Buttigieg’s rapid rise in the Democratic 2020 presidential polls is his ability to think in the moment, to react in real time to questions with thoughtful responses.

That ability may have reached its peak level this week when Buttigieg responded to two homophobic protesters while making his first campaign stops in Des Moines, Iowa -- where the first official 2020 votes will be cast.

More than 1,600 people showed up for the rally, which initially was supposed to draw about 300 supporters. For context, fellow 2020 Democratic rival Corey Booker drew about 100 people to a rally on the same day.

However, amongst the 1,600 supporters were a few hecklers as well. One protester screamed, “You betray your baptism!” at Buttigieg before being forcibly removed from the rally.

At a second Des Moines event, another protester shouted: “Sodom and Gomorrah!” before the Buttigieg supporters in attendance overwhelmed him with chants of “Pete! Pete! Pete!”

And as nice as it was to see his supporters respond with, well, support, it was Buttigieg’s own human response that showed both his dignity and intelligence - two qualities that have helped drive him from a statistical anomaly to a leading contender for the nomination.

In fact, there may be no better way to contrast how Buttigieg handles his protesters than how President Trump has handled his:

“Coffee after church gets a little rowdy sometimes,” Buttigieg, who is a devout Christian, said to the crowd. "The good news is, the condition of my soul is in the hands of God, but the Iowa caucuses are up to you,” he added.

Today in Iowa, @PeteButtigieg was interrupted three times by hecklers. Turns out, it was an organized effort by out… https://t.co/KU2WZXM38n
— Jeff Zeleny (@Jeff Zeleny) 1555465664.0

But what he said next, demonstrated unflinching respect for free speech that you won’t see from many candidates, especially when they are the target of hate speech.

“We’re so dug-in, in such passionate ways, and I respect that, too. That gentleman believes that what he is doing is in line with the will of the creator,” Buttigieg said. “I’d do it differently. We ought to be able to do it differently.”

When asked how he was able to respond to an out of bounds personal attack with such dignity and principle, Buttigieg said for him, it’s the only way politics should be conducted.

“There are a lot of positions, there’s a wide range, with fringes, in our politics,” he said. “That’s part of how politics works, and you shouldn’t be in this if you aren’t prepared to deal with that.”

That said, Buttigieg also had some gentle humor for his hecklers. When one supporter asked what he’d say to critics who claim America isn’t ready for its first openly gay president, the South Bend mayor quipped, “Tell your friends I said ‘Hi.’”