Woman shares texts showing the difference between a healthy and a controlling relationship. 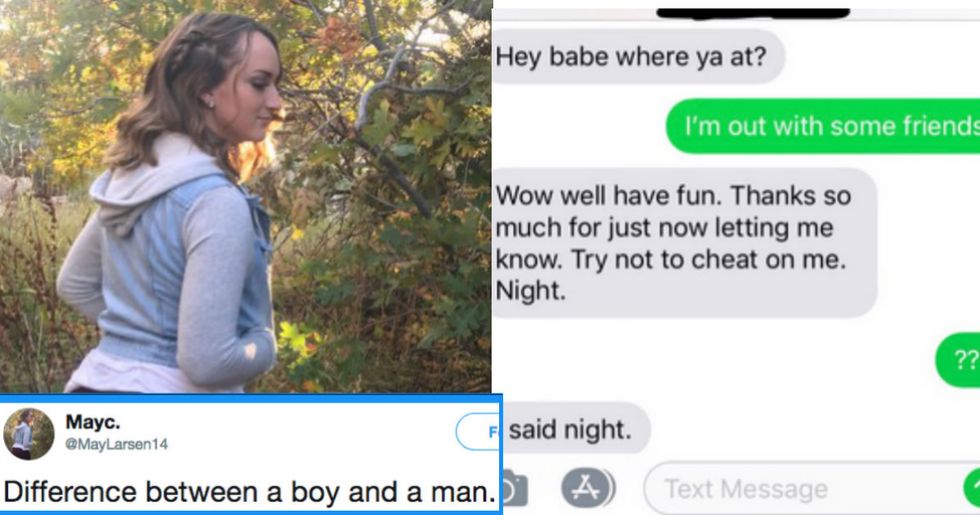 This article originally appeared on 04.10.19

The beauty and horror of screenshots is that they enable us to save our text messages forever and ever until our organs fall out and turn into dust, and all human life has forever been scourged from the earth we destroyed.

But really, saving old text messages from exes can sometimes be an asset when you need to remember exactly why you left them. Alternately, sometimes digital relics from old relationships remind how much good we have in our lives currently.

At least, they did for the Twitter user May Larsen, who recently posted screenshots of two text threads with two very different men.

The conversation on the left shows how an old conversation went down with an emotionally manipulative ex. While the other screenshot is a prime example of what communication in a healthy partnership looks like.

The emotional dynamics of this exchange are full of red flags.

This ex (boyfriend, hookup, whatever he was) went from 0-100 in no time. In fact, the ONLY way this kind of freak out would be excusable would be if they had prior plans she ditched on. Alternately, if he was doing a performance art bit where he embodied Drake's 0-100 via text message. Outside of those possibilities, this type of reaction is nothing short of manipulation and emotional abuse.

The second text message showed how Larsen's current partner responds to a simple night out.

The difference between these responses to a simple night out on the town is night and day. When comparing the two messages, the red flags really pop.

People on Twitter had a LOT of thoughts about the texts.

A lot of people assumed the texts were from two guys she's currently dating.

That quickly got shut down.

Meanwhile, others were caught up with the fact that her current dude wears a cowboy hat.

Regardless of whether the rest of us are pro cowboy hat (I'm pro if you can pull it off), it seems they've got a healthy situation going. Communication is key, in any kind of relationship.