Mom’s blistering rant on how men should be blamed for all unwanted pregnancies going crazy viral.

“All unwanted pregnancies are caused by the the irresponsible ejaculations of men”. 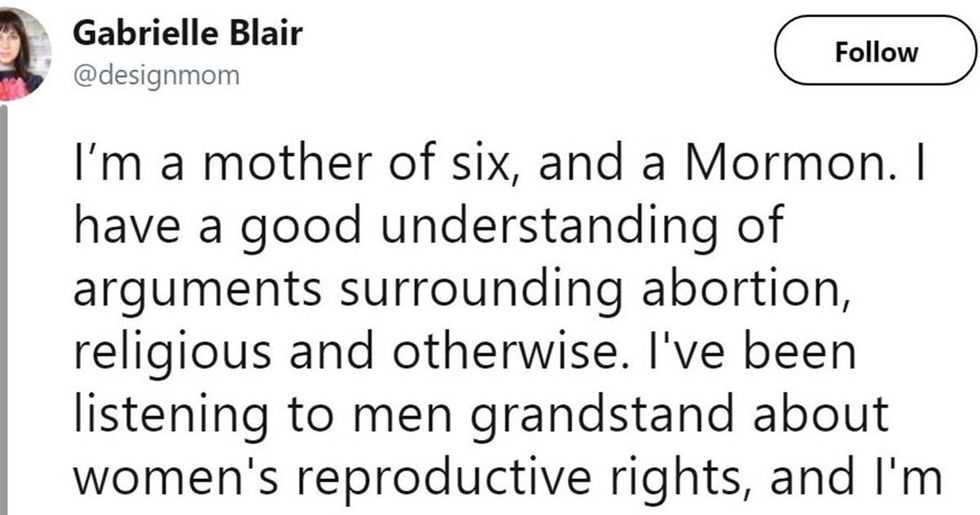 This article originally appeared on 02.22.19

Members of The Church of Jesus Christ of Latter-day Saints, commonly known as Mormons, are a conservative group who aren't known for being vocal about sex.

But best selling author, blogger, and mother of six, Gabrielle Blair, has kicked that stereotype to the curb with a pointed thread on reducing unwanted pregnancies. And her sights are set directly at men.

She wrote a Cliff's Notes version of her thread on her blog:

Here's the whole thread. It's long, but totally worth the read.

Blair's controversial tweet storm have been liked hundreds of thousands of time, with the original tweet earning nearly 200,000 likes since it was posted on Thursday, September, 13.

The reactions have earned her both praise and scorn.

Most of the scorn was from men.

You had me until you said men are 100% responsible. We aren't. We are 50% responsible, excluding rape which needs to be regarded differently obv. As soon as men are blamed 100% we switch off as you sound like one of those raging anti-men types. Sorry.
— Jarrod Parker (@JarrodParker) September 16, 2018\n

For other men, the tweet thread was a real eye-opener.

Hi there. This has really resonated with me. I am strongly pro-choice, but - shamefully - hadn't thought it through until I read this thread. And you're right: male organisms are responsible. We are harming those people whom we profess to love. It's systematic and it's wrong.
— Adam Rutland (@Adam_Rutland) September 16, 2018\n