The Problem with Black History Month

There’s a few good reasons to suspect the month hinders, rather than helps, understanding and celebrating black contributions to civilization. 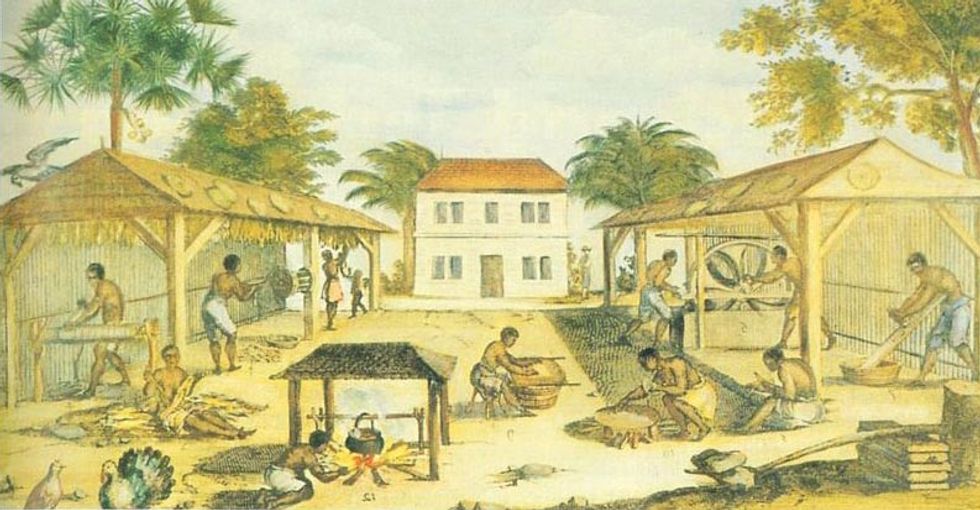 Every year, I experience a sense of frustration ahead of the barrage of ads (Coca-Cola, Nike, AT&T, or Wal-Mart, as the case may be) that use black actors and are exclusively targeted towards Black History Month. Yes, these corporate titans care very much about the black experience, past, present, and future—these good-natured advertisements are our proof. But don’t check for that cute little girl in afro puffs asking her Idris Elba-doppelganger daddy why the all-new-for-2015 Chevy Impala is like Harriet Tubman (I-95 being the Underground Railroad, naturally) come April. By then it’ll be back to business as usual, and most of the faces on the flat screen will once again be white.

History is curated by those who would have the most to lose in the face of its harshest truths. And the oppressed and marginalized do not have much hope in accessing these truths, about themselves and about their oppressors, without a concerted desire for knowledge. Even during this month of February, quarantined as our sole annual celebration of black American greatness, the ever-present system of white supremacy dictates whom we’re to focus on and how. The sanitized histories of Martin Luther King Jr., Harriet Tubman, and Frederick Douglass are regurgitated annually, be it via adspeak or in lesson plans, made palatable for white consumption.

The message that these were great men and women is ratcheted up to 11 every February. This is, on its face, a good thing. But these tailored narratives are often devoid of a vital bit of context: That the respective struggles of these individuals were borne of a system that maimed and killed their brothers and sisters, physically and spiritually, actively nullifying their humanity. This tweaking of “black” history for the sake of maintaining the very advantages gained by the white majority over centuries of oppression and subjugation says, yes, Frederick Douglass was a former slave, but we needn’t spend too much time on slavery because that was ages ago. Sure, MLK was beaten and jailed, but he really was “one of the good ones.” Yet, his goodness (acknowledged by white America more readily in death than while he was alive and “agitating”) did not save him from an untimely death. Along with select leaders of struggles of the past, entertainers and athletes are pushed forward as proof of the undeniable upward trajectory of superficial black progress, and thus white progress, cuz see, we now let y’all amass fame and millions, whereas, in the words of Michael Richards, “Fifty years ago we’d have you upside-down with a fucking fork up your ass!” (insert Seinfeld bass line).

To this day, I am grateful to have had parents who believed that my education extended beyond the classrooms of the private schools they worked so hard to put me through; my mother and father often amended the lessons I’d learned with bits and pieces of the inconvenient truths pertaining to the formation of this country. Sadly, at the time I just couldn’t count on my teachers—all white and sometimes wary of teaching “black” history to the only black child in the class—for such insight.

In my early years of school, I got the distinct impression that black history was not my nation’s history, that black contributions and experience were marginal at best. In a European Civilization class, a teacher awkwardly had us do some role-playing, with me as the slave and a white classmate as my master. The teacher’s solution was to then, even more awkwardly, declare me the master and my classmate the slave, which only made things more embarrassing for all in the room. I had to sing “Dixie” in an elementary school play about the Civil War, having no idea of the context of the song I was belting out. I know far too much about European Neoclassicism and Baroque and Rococo, but far less than I’d like to admit about the masters of Africa and its diaspora. Knowledge of these women and men had to come from electives, sought out at my discretion in college classes. Learning about the Kingdom of Kush and the Mali Empire, Toussaint L’Ouverture, Nat Turner’s uprising, or the Civil War’s Buffalo Soldiers and WWII’s Tuskegee Airmen were endeavors I would have to embark upon on my own.

Folded into my frustration at what Black History Month has come to mean is the ignorance of those who cannot accept the notion of honoring blacks at all, February standing as an unforgivable affront to their whiteness. “Why isn’t there a White History Month?” someone will invariably ponder out loud. While the sentiment surrounding this month seems to be mainly one of reverence and cordiality (Black History Month feels like if you were bullied by some kid in school everyday, but on your birthday, he agreed to leave you alone, ya know, because it’s your birthday), this crowd rears its ugly head every year. These are usually the same types asking why there aren’t scholarships for white people, or why an NAAWP would be racist.

One is left to wonder, what exactly would be celebrated during this White History Month that hasn’t already been thoroughly covered for generations? So much of my education was specifically pointed at European, and then American, triumphs in the arts, warfare (but not genocide, oh heavens no), and science that my young mind began to believe my ancestors to be the losers in history by default. After being educated on the various touchstones of slavery and the civil rights movement, yet before the enlightenment that came with learning of the advanced empires of Africa and the strides made in many fields by her sons and daughters, I believed the toxic fallacy that Europe was the pinnacle of civilization, that ancient Egypt was such an outlier it wasn’t even really African. The #BlackHistoryIsAmericanHistory and #BlackHistoryYouDidntLearnInSchool tags (which point to black leaders and achievers throughout history that textbooks and 30-second ad spots may have missed) that have already cropped up on social media are vital, and reinforce the importance of taking pride in learning about one’s past. This pride, black pride, does not, however, have to come at the expense of non-black dignity.

If anything, Black History Month has become an extension of white supremacy in the subtlest of ways, with the system dictating the terms and conditions of how we’re to honor our forebears, whose deeds and experiences have been sanitized beyond recognition in some respects, and often sloppily co-opted. We’d be better served without the month, to be frank, as separating so-called “black” history from American history, European history, human history is the sort of slick pat-you-on-the-head-while-kicking-you-in-the-ass trickery that seems all too familiar to Black America in our “post-racial” society. In fact, it would be nice if as much energy was put into educating our youth, of all colors, of the deeds, good, bad and all in between, of the men and women of all shades who made the world what it is.

“Well you have Obama, so black people have made real strides,” the “Will someone please think of the white people?!” crowd will mention as proof that our racist history is now a closed chapter, deserving of no more reflection than the shortest month of the year can offer. But the sometimes subtle no-the-fuck-they-didn’t racism we’ve seen in everyone from elected officials to the peanut gallery (shout out to that “Somewhere in Kenya, a village is missing its idiot” bumper sticker) is actually proof that President Obama’s election upset the status quo in such a way as to reveal the deep roots of racial prejudice in this country.