These Augmented Reality Sculptures Make Any Environment An Art Installation

In AR, her works have soared above Malawi, dangled London, and floated down the Los Angeles River. 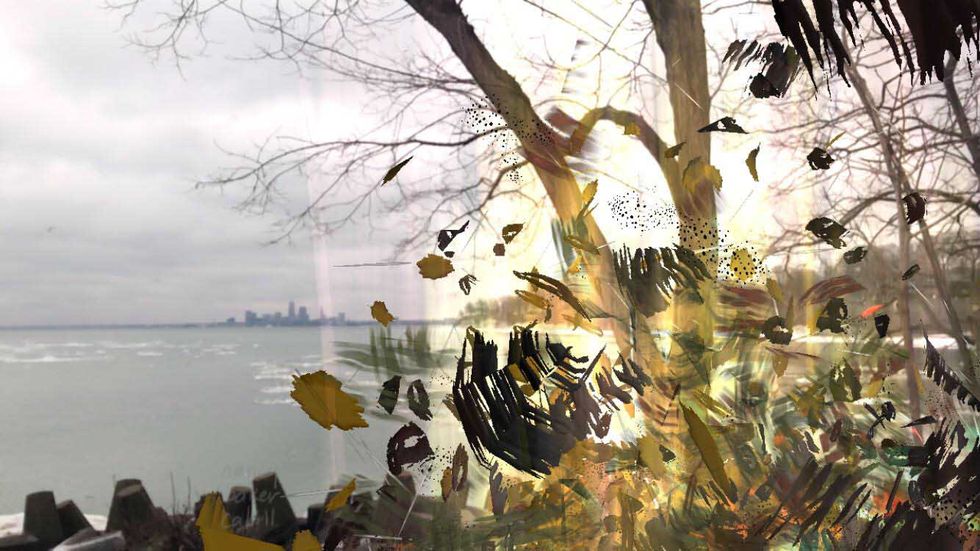 Angeles-based artist Nancy Baker Cahill recently released 4th Wall, an iOS app that allows audiences across the globe to view her drawings in their own environments through the wonders of augmented reality. With AR, they can become a part of many different environments, at least temporarily. Over the last few weeks, her work has turned up in some surprising places, a few of which have been documented on the app's Instagram feed. They've flown through the sky above Malawi, dangled over a London street, and floated down the Los Angeles River. One even traveled the baggage carousel at Los Angeles International Airport. With an app, Cahill's drawings can go anywhere.

"It really is a new iteration of public art," says Cahill by phone. To create this project, the artist herself stepped inside AR's cousin, virtual reality.

Even when Cahill worked primarily in two dimensions, with graphite on paper, there was a sense that she aimed to engulf viewers in her drawings. Her work is abstract and often takes on grand shapes resembling storms and swarms. With 2D drawing, though, Cahill hit a creative block. She drew larger forms, but ultimately, was hindered by the size of her studio. She worked on a series of called "Surds," where she punctured holes and added lucite to drawings that resemble twisted limbs and knotted muscles. "It was playing with space and perception, but it wasn't going far enough," she says.

Then a colleague suggested that Cahill try virtual reality.

In recent years, the allure of virtual reality has captivated a broad swath of artists and developers. From college students to major film directors, like Jon Favreau and Alejandro Iñárritu, VR has become a tool to take viewers deeper into worlds that they might otherwise only see through screens. Cahill tried a variety of VR experiences and was smitten. "I just came out of it thinking, this is the perfect next step," she says. "This is exactly where the work needs to go." So, she stepped into VR as an artist with Tilt Brush, an app that enables people to draw and paint inside a headset.

"It's a somewhat ecstatic experience to draw in a three dimensional space," says Cahill. Yet, there were limitations, particularly as Cahill strived to keep the cohesiveness between her 3D drawings and her 2D ones. She hooked up with Drive Studios to develop brush strokes that could be used in the 3D work.

"I really wanted to create a fine art experience for the viewer," says Cahill. "I wanted you to engage with these drawings the same way that you would in a museum, a gallery, or anywhere where you have access to a work of art, where you're really led by your own curiosity."

Plus, Cahill found a conceptual connection between virtual reality and her drawings on paper. "The truth is, I had gone into this whole endeavor thinking that I was going to make one thing and learned, very quickly that it was the void, the intimate void in VR that is mirrored in paper. When you look at a piece of paper, it too represents a kind of void," she says. "All of my drawings represent a kind of moment of frozen tension in a void. So, it was this very natural translation to go into that same void and create forms and a kind of imagery that held that same tension, but allowed you to engage with it on a whole new level."

While Cahill draws in VR, she chose to release the finished pieces, four of which exist so far, in AR to reach the widest audience. While VR has gained popularity in recent years, a full immersive set-up for the home is still high-priced technology. There are spaces like IMAX VR popping up globally and some arts institutions have experimented with the technology, but that's not commonplace yet.

Taking VR-made art into an AR app is a complicated process that involves both the artist and her collaborators. Cahill says uses the word "build" to describe that process now, likening it to architecture and sculpture.

Nancy Baker Cahill at work in her studio. Photo by Michele Asselin.

She says that since starting this project, even the way she draws on paper has change. "More than affecting how I draw, it's changing how I perceive space on paper," she says. "There's a different kind of velocity now to the drawings, a different kind of motion and energy that wasn't there before. It's neither good nor bad, I'm not placing a value judgment on it, it's just interesting to see that happen."

Cahill recalls returning home after trying VR for the first time and being disappointed with the flatness of images on a television set. "It was that persuasive, that profound," she says. That realization prompted her to deeply consider how she uses both VR and AR. "I feel compelled to use it in interesting and innovative, but, most importantly, responsible ways," she says. "I really want to carve out new territories that are positive."