“I had a few choice insults for the president” 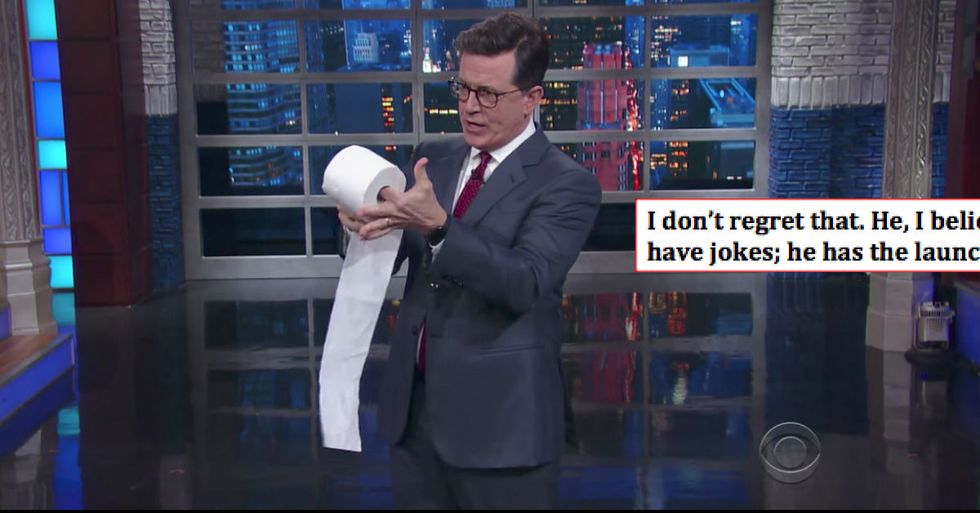 Conservative Twitter has finally embraced LGBTQ equality. Just kidding. They’re just desperately trying to get Stephen Colbert in trouble with his corporate bosses over at CBS.

You see, The Late Show host went on a massive anti-Trump tirade during his Monday broadcast, culminating with a joke that some say went too far. And by “some,” we mean almost exclusively right-wing voices on Twitter that ordinarily wouldn’t blush at attacks on gay rights.

During Colbert’s 12-minute monologue, he attacked President Trump for insulting and subsequently walking out on an interview with CBS News anchor John Dickerson—when Dickerson had the audacity to ask him a follow-up question about Trump’s unfounded allegations of “wiretapping” from the Obama White House.

“Sir, you attract more skinheads than free Rogaine,” Colbert said. “You have more people marching against you than cancer. You talk like a sign language gorilla that got hit in the head. In fact, the only thing your mouth is good for is being Vladimir Putin’s c**k holster.”

It was the last line that is causing the mock controversy to pick up steam, taking the form of a #FireColbert hashtag that conservative media has been all too happy to circulate. Granted, many in the audience audibly gasped at the comment, but there were no boos and, so far there, hasn’t been a peep of outrage or a demand for an apology from the LGBTQ community.

And all of that chatter has turned this into a “real story” covered by major trade outlets such as Variety and garnering attention on sites like the Drudge Report. In other words, the so-called outrage to this incident is almost entirely being manufactured by those who have zero track record of supporting the community they claim to be standing up for now.

For his part, Colbert isn’t taking the bait. During his monologue for his Wednesday show, the comedian said:

“Now, if you saw my monologue Monday, you know that I was a little upset at Donald Trump for insulting a friend of mine. So at the end of that monologue, I had a few choice insults for the president in return. I don’t regret that. He, I believe, can take care of himself. I have jokes; he has the launch codes. So, it’s a fair fight.”

“While I would do it again, I would change a few words that were cruder than they needed to be. I’m not going to repeat the phrase, but I just want to say for the record, life is short, and anyone who expresses their love for another person, in their own way, is to me an American hero. I think we can all agree on that. I hope even the president and I can agree on that. Nothing else. But, that.”