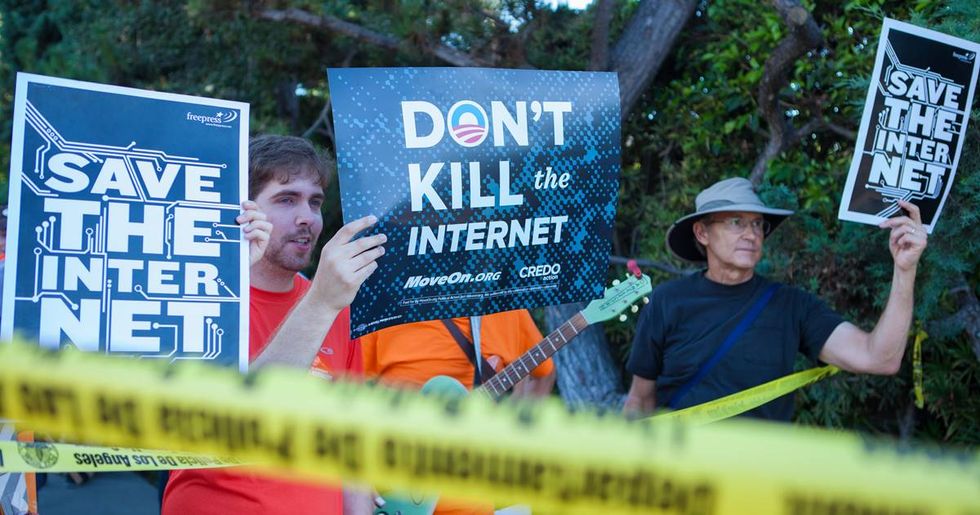 Say goodbye the equality of the internet.

Previously, internet service providers (ISPs) were required to offer equal access to all web content. Now, ISPs are allowed to block websites or charge for higher-quality service or specific content. They can also push consumers towards their content and products while potentially slowing down or eliminating access to their competitors’ content and products.

The repeal will also allow ISPs to split internet access into bundles like cable providers do with television programming.

“Internet service providers now have the power to block websites, throttle services, and censor online content,” Jessica Rosenworcel, a pro-net neutrality Democratic member of the FCC said in a statement. “They will have the right to discriminate and favor the internet traffic of those companies with whom they have pay-for-play arrangements and the right to consign all others to a slow and bumpy road.”

In 2015, the Obama administration passed net neutrality regulations banning ISPs from offering internet fast lanes to companies willing to pay extra to have an edge over their competition. It also prohibited them from blocking sites or slowing down web traffic.

When Donald Trump was elected, his new FCC chairman, Ajit Pai, set out to dismantle the regulations. He called for their repeal saying they were heavy-handed, a mistake, and they imposed “utility-style regulations upon the Internet.”

The FCCs departure from upholding net neutrality came after the country’s biggest ISPs spent $23.6 million on lobbying the federal government in 2017.

How are people responding?

Since December, more than 65 bills have been introduced to counter the FCC’s decision. Washington and Oregon have already passed rules that mirror the 2015 net neutrality regulations and California passed a bill in its state senate to reestablish net neutrality. But the FCC’s ruling came with a clause that prohibits states from enacting their own net neutrality laws, so the commission will most likely fight state rulings in court.

On the federal level, the Senate voted 52-47 in favor of repealing the FCC’s decision through the Congressional Review Act. The vote was primarily down party lines, with John Kennedy of Louisiana, and Lisa Murkowski of Alaska breaking with Republican ranks.

The Senate vote will face an uphill battle in the House and will then have to be signed into law by the president. But there is reason to be optimistic. According to a recent Morning Consult Poll, there is bipartisan support for net neutrality which could sway Congress and the president.

Two Republicans in Congress have also introduced bills that would provide some net neutrality restrictions, but they would fall short of a full repeal. In 2017, Representative Marsha Blackburn of Tennessee proposed a bill that would ban ISPs from blocking content, but would still allow for the creation of fast lanes. In May, Senator John Thune of South Dakota said he would introduce a bill that bans paid prioritization while keeping the net neutrality repeal in place.

The FCC’s decision also faces a battle in federal court. Net Neutrality advocates, joined by companies including Etsy and Kickstarter, have sued the FCC, claiming its decision violated the Administrative Procedure Act (APA). The APA bans federal agencies from arbitrary or capricious decisions. But it’s believed that a decision in the case won’t be reached until at least 2019.

What will the internet look like if nothing happens?

Until court battles and legislative attempts play out, there won’t be a huge change to the internet. But ISPs are eyeing a new internet model where they can charge you more or less money to access bundles of websites, like your cable company.

Image in a world where you have basic internet and premium internet. It just may happen.

Your ISPs will also control how fast you can download files and the speed of specific websites while blocking you from accessing specific apps, information, and products.

While this may seem like a doomsday scenario for the internet, ISPs have already been working to block content and apps, censor sites, and increase fees. Now, they’ll have nothing holding them back besides competition from other ISPs.

But according to a study by PCMag, only 30% of U.S. zipcodes have three or more ISPs to choose from.

How to fight back

With the Congressional Review Act coming before the House, here’s an easy way to contact representatives who oppose net neutrality.

You can join more than 2 million people by signing a petition at Change.org.

You can also donate to organizations that are fighting for net neutrality, such as Fight for the Future, Electronic Frontier Foundation, and Access Now.