Amal Clooney says she experienced sexual harassment at work but says her daughter won’t have to.

“I think now it’s the men, or the harassers, who have something to fear.” 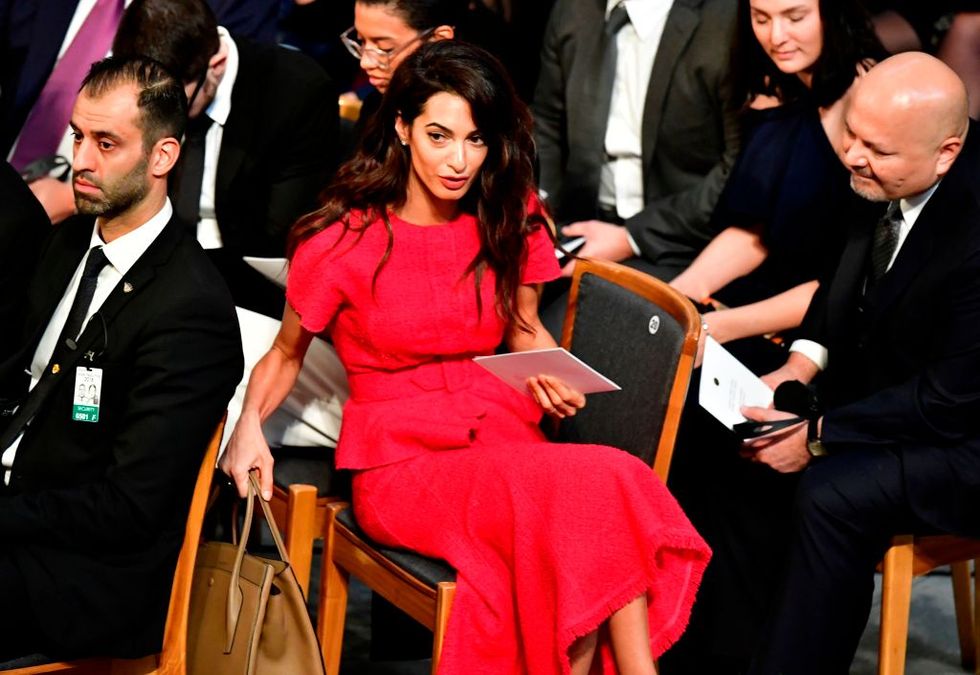 The fashion choices of Amal Clooney, the human rights lawyer whose trophy husband is George Clooney, have been covered in the press as much as any Hollywood celebrity.

But the human rights lawyer has never detailed her experience with sexism or sexual harassment, despite the fact she’s been asked “Who are you wearing” even while on her way to appear before the European Court of Human Rights.

When Clooney sat down with her journalist father-in-law, Nick Clooney, during a Q&A at the Massachusetts Conference for Women in Boston, she was asked if she’s ever experienced sexual harassment in the workplace.

Her answer was simple – “Yes.”

“In the sense of unwanted advances that were inappropriate and awkward to deal with,” she explained. “Yes. And I think at the time, I would not have felt comfortable speaking out about it because other [women in similar situations] weren’t, and so I think that’s changed now,” said Clooney.

But Clooney, who is a mother to 18-month-old twins, says there’s hope for the future.

Her daughter Ella will have a better experience than the generations before her. “I think the workplace is safer for my daughter and is more fair than it was,” she said. “I don’t think women of her generation are going to expect that that’s just something that we have to put up with and I think now it’s the men, or the harassers, who have something to fear and not the victim and that’s a very good change, so thank you to the women of the Me Too movement.”

While Clooney acknowledges how far we’ve come, she admits there’s still a way to go. “We are living through a moment of reckoning and a rebalancing of power. But it's a long way from #MeToo to Never Again,” said Clooney. “For too long, women have suffered abuses without speaking out or without being believed,' she said.

Clooney delivered a speech on women’s rights, the Me Too movement, and equality during the event. “Achieving equality is not just the right thing to do, it is the profitable thing to do. No country can reach its full potential until women have equal rights,” said Clooney during her speech.

Clooney has been on a roll when it comes to speaking out against harassment. Recently, Clooney attended the Nobel Peace Prize Ceremony in Oslo to support two laureates, Denis Mukwege and Nadia Murad, who won the Nobel Prize "for their efforts to end the use of sexual violence as a weapon of war and armed conflict."

“I think giving her this prize sends a message to all women who’ve been victims of sexual abuse that they should not feel ashamed of coming forward, that their voices cannot be ignored, and that those who abuse them have to be held to account. It’s been far too long that there’s been this battle against impunity,” said Clooney.

And on December 6th, Clooney was named 2018 Global Citizen of the Year at the United Correspondents Association’s 70th anniversary celebration. Clooney took the opportunity to put President Trump on blast for naming the American press the “enemy of the people,” saying it emboldened autocratic regimes who kill journalists.