You can escape the room, but you can't escape stupidity. 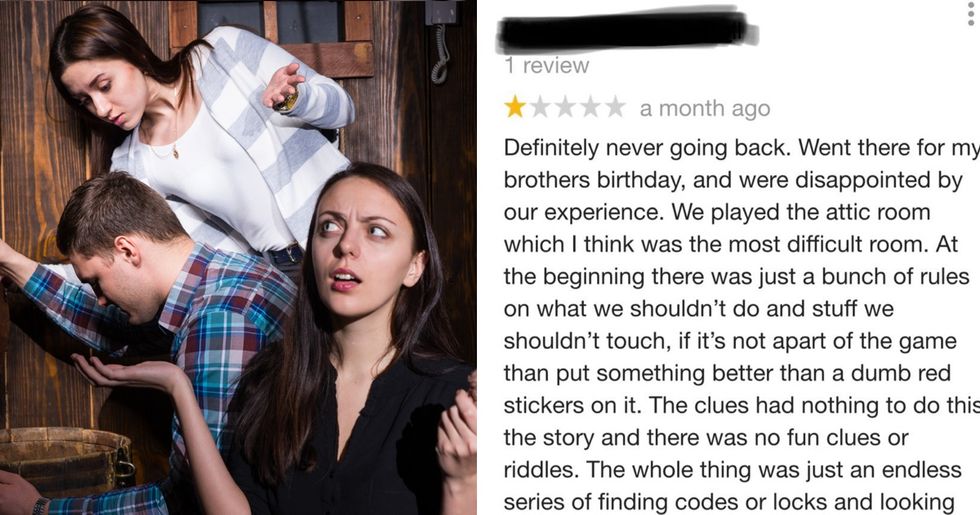 The disgruntled escaper entered the room for their brother’s birthday, and couldn’t determine what was and wasn’t part of the game.

“At the beginning there was just a bunch of rules on what we should and shouldn’t touch, if it’s not apart [sic] of the game than [sic] put something better than a dumb red stickers on it,” is the grammatically incorrect introduction to the complaint.

“The whole thing was just an endless series of finding codes or locks and looking for keys,” they wrote, describing what escape rooms are.

The customer then accused the owner of being “rude” and “not knowing what he was talking about,” assuming he was in a bad mood because he was “butthurt [they] didn’t like it.”

The so-called “butthurt” owner replied with his response by calling the reviewer an idiot as politely as possible.

“Like most escape rooms, we clearly mark items which are not part of the game. This was also stated to your group including oral intros, on the website, during registration, and on signed waivers,” he explained.

Unlike in the original review, the owner explains that the reviewer and their crew actively “ripped wires out of props,” even though they were so very, clearly, marked as such.

The smartypants ripped wires and stuck them into an electrical outlet, which even though it sounds foolproof, is NOT a smart thing to do.

You can escape the room, but you can’t escape stupidity.