Thousands of kids live in "book deserts," without easy access to libraries. #ProjectLiteracy 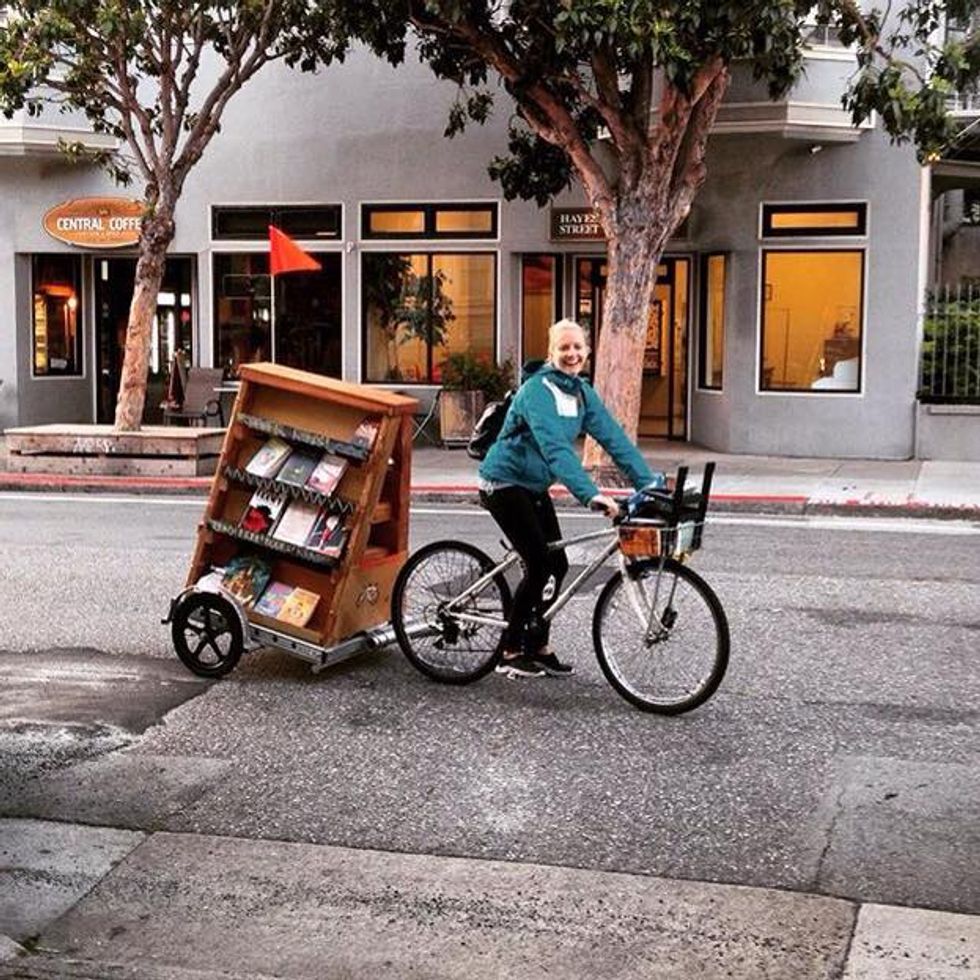 “Food deserts" refer to low-income areas where convenience stores are often the only viable food source and fresh produce is a rarity. But nutritious foods aren't the only thing kids need to thrive and grow.

Many of these undernourished kids also live in so-called "book deserts"—areas without easy access to libraries and reading material to nurture their imaginations and development (just think of the 12-year-old boy in Utah who asked his mailman for junk mail to read because he couldn't get to a library).

To combat these problems, creative-thinking librarians and literacy supporters are using inventive solutions to expand access to books and promote a love of reading.

In the Anacostia neighborhood of Washington, D.C., Soar with Reading (a project of JetBlue Airlines) installed book vending machines to dispense 100,000 brand-new free books in three locations for kids ages 0-14. Soar with Reading is now accepting votes for its next city, with Los Angeles, Detroit, New York, Houston, and Fort Lauderdale in the running.

Outside the U.S., Book Bus delivers accessible and relevant books to children in Africa, Asia, and South America. So far, the charity has reached over 10,000 kids in Zambia, Malawi and Ecaudor, with the goal of reaching 10,000 more kids by 2016.

Meanwhile in India, a program called PlanetRead was recognized as an innovative way to improve child literacy at International Literacy Day in 2012. Self-described as "karaoke on Bollywood for mass reading," PlanetRead uses Same Language Subtitling (SLS) to subtitle movies or music videos on Indian TV to help weak readers improve their reading skills.

Books on bikes are another creative solution gaining popularity in the U.S. and abroad. A scaled-down version of the book mobiles that were once a fixture of many middle- and upper-class childhoods in America, these pedal-powered libraries allow librarians to bring books out of the library shelves and into the communities they serve. And in places that lack roads and infrastructure for a book mobile, they can also prove more practical.

Seattle Public Library's Books on Bikes program started in May 2013, following an internal campaign to create more innovative outreach programs. "Seattle has a really strong bike culture so we wanted to tap into that and provide full service library programs but do it in a way that is nimble," says managing librarian Jared Mills, who spearheads the program.

Seattle Public Library has three different bike trailers that librarians bring to community events, curating reading material based on the event's focus. One trailer has a children's theme. "Children's librarians have a great time bringing children's activities to different communities," Mills says. "It's neat to see the kids touching [the trailer]. It brings that joy of reading and discovery."

The trailers are also wifi-enabled so that librarians can register people for a library card and check out books on the spot using an iPad. "You can walk up and walk away with an arm full of books," Mills says. "When we're out riding, we get people honking and waving. They love that the library is out in such a unique way." In the course of a year, the Books on Bike program visits 20-30 events and services around 1,500 people.

In San Francisco, private school librarian and bicycle enthusiast Alicia Tapia started Bibliobicicleta, a donation-based library on bicycle, in May 2013 after a successful Kickstarter campaign.

Tapia's bike trailer can carry about 100 books at any given time, and she says the Bibliobicicleta attracts readers of all ages, lifestyles and income levels. "Of course kids are a little more brave to just approach the bike but adults—if they're not too cool—will stop and see what it's all about," she says.

Tapia hands out donated books in San Francisco's Pandhandle neighborhood on Tuesday evenings, but she'll also ride to the Mission Area and Golden Gate Park as time and weather allow. In the near future, she hopes to get an electric motor installed on her bike so she can travel further afield. "I want to go to other places, but the hills of San Francisco don't make it safe to do that with the weight I'm carrying," she explains.

While cycling around with a book-laden trailer can be tiring, Tapia finds the project deeply rewarding. "Books do something for the human brain that nothing else can," she says. "With books comes happiness, and people build empathy for one another. [We're trying to offer] new perspectives and reignite an enthusiasm for reading."