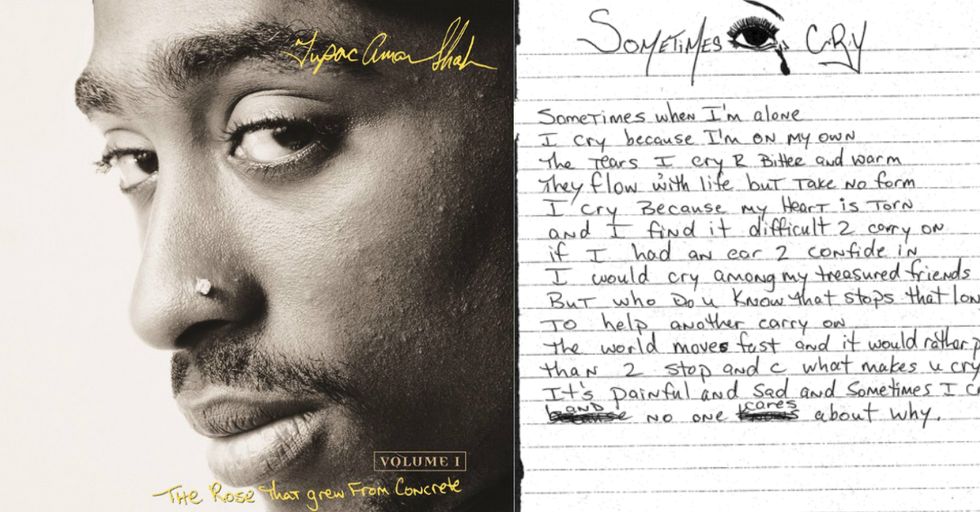 Image composite of "The Rose That Grew From Concrete" book cover and a page from the book/Pocket Books.

The act of plagiarism already requires a high degree of audacity, a supreme confidence in your ability to get away with it, because there’s nothing more embarrassing than getting caught stealing someone else’s work (Melania Trump would know). But at least one man — a poet laureate, no less — was brazen enough to steal the work of one of the greatest American poets of the century: Tupac Shakur.

The work of the late Canadian poet laureate Pierre DesRuisseaux is being reconsidered in light of allegations that the writer plagiarized Tupac Shakur and Maya Angelou, among others, in a 2013 book titled “J’avance” (“I Rise”). The likenesses were originally discovered by fellow Canadian poet, Kathy Figueroa, and then invesitgated by Ira Lightman, a poetry detective (yes, that’s a thing). He says there are striking similarities between DesRuisseaux’s “When I’m Alone” and Shakur’s “Sometimes I Cry” from his 1999 collection “The Rose That Grew From Concrete.” Here are the two poems:

“Sometimes I Cry” by Tupac Shakur

I cry because I’m on my own

The tears I cry are bitter and warm

They flow with life but take no form

“When I’m Alone” by Pierre DesRuisseaux

Sometimes when I’m alone I cry

The tears I cry are bitter and burning.

They flow with life, they do not need reason.

DesRuisseaux also appears to have lifted work from Welsh poet Dylan Thomas and Irish poet Louis MacNeice. The poet passed away last year, so there’s no way to confront him about the findings. Lightman says this kind of plaigiarism — a nearly word-by-word French translation of these works — is shocking from a poet of DesRuisseaux’s stature.

“It looks to me like a book of deliberate translations,” Lightman told the National Post. “And yet there’s no crediting.”