Donald Trump’s Son Gets Confused About What People Are

Someone get Eric a dictionary 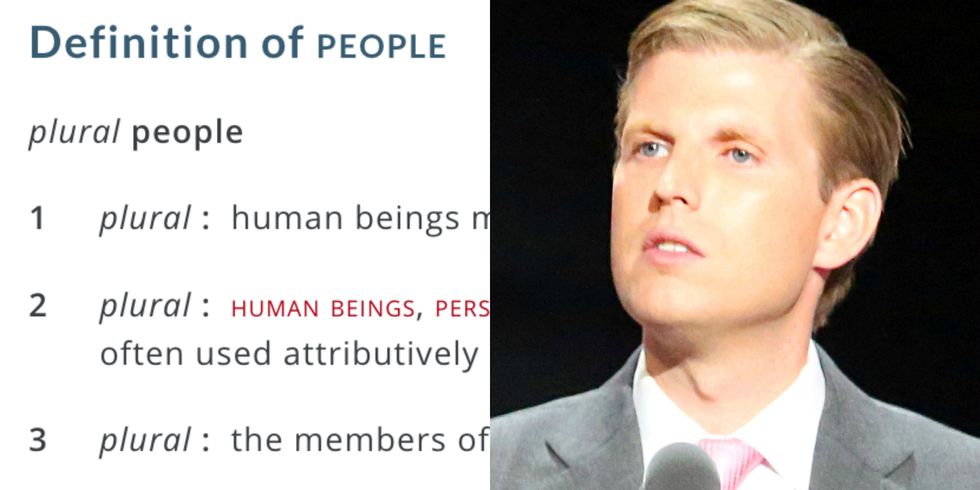 According to the crowd-pleasing online dictionary, Merriam-Webster, the primary definition of “people” is “human beings making up a group or assembly or linked by a common interest.” According to Eric Trump, Democrats are not people.

In a Tuesday night interview with Fox News’ Sean Hannity, Trump lamented the behavior of overly critical Democrats who only want to see a thorough investigation into his father’s involvement with Russian officials. These critics, he said, are “not even people,” adding that the Democratic Party is “imploding.” "They have no message,” Trump said, “you see the head of the DNC [Democratic National Committee], who is a total whack job." He added that he’s “never seen hatred like this,” though we could probably point him to a few acts of hatred carried out in the past few months that just might compete with the Democrats’ interest in due process.

So Eric Trump might be a little misguided when it comes to accurate name-calling. To be fair and acknowledge the devil’s advocates out there, Hillary Clinton’s “basket of deplorables” didn’t make much sense either. However, Eric Trump is clearly succeeding in one huge, tremendous way, and that’s channeling the voice of his father. “It's so, so sad,” Eric Trump said of Democrats, “I mean morality is just gone, morals have flown out the window. We deserve so much better than this as a country. You know it's so sad.” He could have squeezed in a few more “sads” to sound even more presidential, but luckily Eric is young and has plenty of time to work on constricting his vocabulary.