George W. Bush just gave an incredible speech about the importance of immigration.

“May we never forget that immigration is a blessing and a strength." 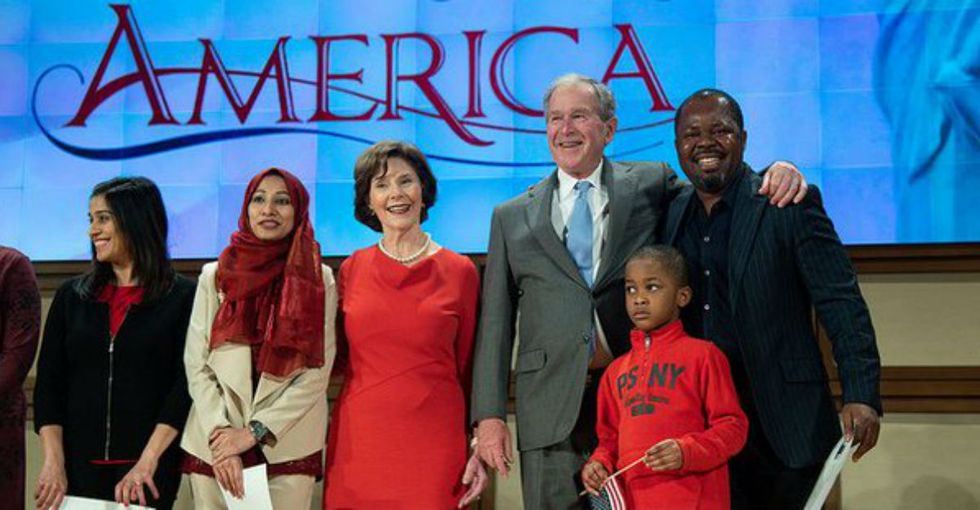 To build or not to build. That is the question we’ve been hearing when it comes to immigration reform. For some, it’s not the question we should be asking.

At a naturalization ceremony at the George W. Bush Presidential Center in Dallas, TX, former President Bush spoke about the role immigrants played in making America great in the first place, noting a correlation between America’s success and America being “the most welcoming” to immigrants. “A spirit of self-reliance runs deep in our immigrant heritage, along with the humility and kindness to look at someone less fortunate and see yourself,” said Bush.

Bush highlighted the impact immigrants have had on American ideals. “So many of us can draw a line somewhere back to a man or woman who had the idea that life could be better, and that hope led them here,” said Bush during the ceremony. “Generations of new arrivals left their mark on our national character in traits that friends abroad still recognize as distinctly American: our optimism, our independence and openness to the new, our willingness to strive and to risk, our sense of life as an adventure, dignified by personal freedom and personal responsibility.”

In his speech, Bush stated we need to respect our borders, but we also need to be respectful of immigrants, a departure from the black and white immigration rhetoric currently being thrown around. "America's elected representatives have a duty to regulate who comes in and when," said Bush. "In meeting this responsibility, it helps to remember that America's immigrant history made us who we are. Amid all the complications of policy, may we never forget that immigration is a blessing and a strength."

Bush also called on politicians to cool it during discussions. "I hope those responsible in Washington can dial down the rhetoric, put politics aside and modernize our immigration laws soon," said Bush. In 2007, Bush backed bipartisan immigration reform which ultimately failed, something he acknowledged during his speech.

For some, the line between America’s success and immigration is shorter than for others, making the correlation more apparent. As the daughter of an immigrant, I’ve seen first-hand that the immigrant mentality of hard work and pushing through hardship can only be a good thing. It’s difficult to take the American Dream for granted when you were raised by someone who considered an orange to be a luxury. Immigrants come to America in search of a better life, but they can also make America better in turn.