The Lessons We Have Not Learned 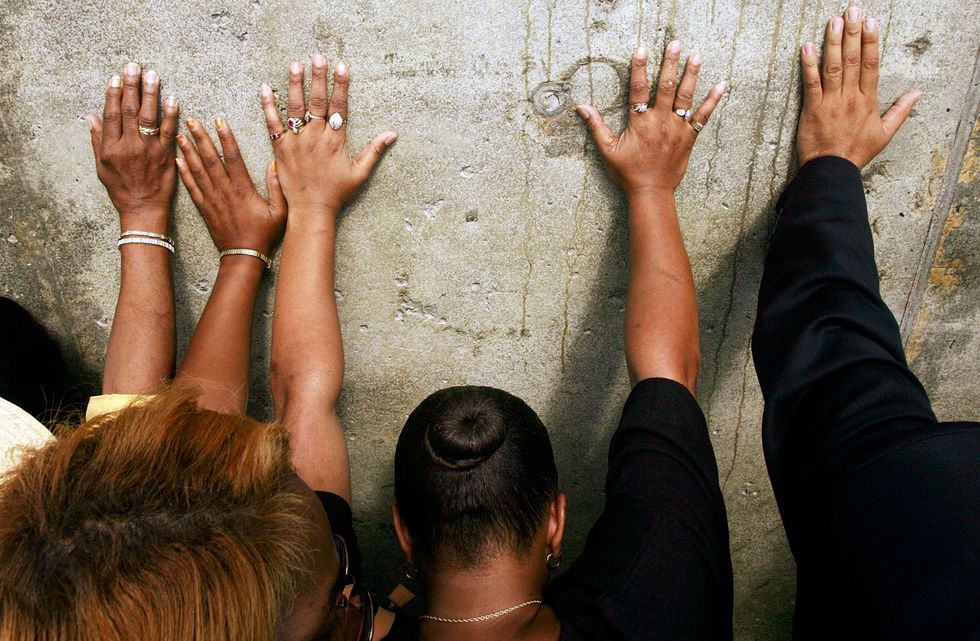 Residents of New Orleans’ Ninth Ward honor the victims of Hurricane Katrina during a Memorial Day service in 2006. Getty Images.

It has been ten years since Hurricane Katrina devastated New Orleans, a tragedy that was only compounded by the government response that followed. And while it’s still unclear exactly how many people died in the storm and its aftermath, one thing is abundantly clear: The city’s African-American population bore the brunt of the disaster.

In the days and weeks after the storm George W. Bush and his administration faced a deluge of criticism, frustration and anger that rapper Kanye West gave voice to during a live telethon to raise money for Katrina’s victims.

While the rapper has since apologized for the off-script remark, the main point of his critique has been picked up and expanded upon by a cadre of academics, columnists and justice-minded environmentalists who argue that the government’s meager response to Katrina was influenced by the fact that the suffering population was predominantly poor and black. Some, like Slate writer Jamelle Bouie, have gone so far as to pinpoint Hurricane Katrina as a galvanizing moment for a new generation of young African American civil rights activists. “Black collective memory of Hurricane Katrina, as much as anything else, informs the present movement against police violence, Black Lives Matter,” Bouie wrote this week.

Dr. Robert Bullard, dean of the Leland School of Public Affairs at Texas Southern University, echoes that sentiment. The environmental justice activist, who has authored almost two-dozen books on the subject, will be in New Orleans today for the third annual HBCU Student Climate Change Conference. Looking at the current national conversation about police violence and institutional racism, Bullard says he sees that effort and the focus on environmental justice as “one movement.”

How does Hurricane Katrina figure into our contemporary history? Considering what happened in Katrina, and what’s happening now, how are the two related?

Many of us, three decades ago, were saying, for some reason our children don’t matter. If you’re black or brown, you don’t matter.

The fact that families in our community were being poisoned because we lived next to these refineries, next to these chemical plants … It’s almost like our lives don’t matter. Our health doesn’t matter.

When we talk about police violence and police brutality and the accepted number of killings occurring by police, the Black Lives Matter movement had come quickly because of the fact that we have lots of high-tech cameras, we have cell phones and we can show it instantly when a person is shot down. It’s on video and it goes viral, whereas a kid being poisoned by lead, or communities being poisoned … it’s a slow process. It’s not as dramatic. But death is death. So I see the connection and I think it’s important to understand that there is a connection between (being) killed by a bullet made of lead and being killed by a plant that’s pumping lead out of its factory.

When you consider the government response to Katrina, what does it tell us in regards to the larger environmental justice issues you’re talking about?

So when you talk about how race plays into our response to a disaster, people have to ask a question: Will the response to climate change be fair? Will the policies that will be put in place be fair? That’s why my colleague, Dr. Beverly Wright, and I wrote the book, The Wrong Complexion for Protection, which looks back to the Great Mississippi River Flood of 1927 all the way up to the BP spill.

Hurricane Katrina was a catalyzing moment in the conversation on climate change, but in what ways did Katrina expose those deeper inequities?

When you look at how New Orleans was situated and how the Gulf Coast was situated, race and class and economics played a major role in determining where people live. Jim Crow laws determined who lives where. Because of housing discrimination and residential segregation, and because of plain-old, in-your-face racism, African-Americans and other people of color were confined to living in the most vulnerable parts of New Orleans and the most vulnerable neighborhoods in the Gulf Coast.

The fact that their was no relocation plan to bring back those populations that didn’t have a lot of resources has something to do with the fact that over 100,000 African-Americans have not returned. So you’ve got 85 to 95 percent of white residents returning, but a significant portion of the black population has not returned.

Those things are real and I think Katrina put it in living color, a classic example of how discriminatory policies that precede a major disaster have creeped into the recovery.

If you build on inequity, one should expect more inequity, not less. These are not refugees that have not been able to return. These are American citizens.