Why This Mom Is Taking On Monsanto Protesters

The founder of the March Against Myths wants to deflate your GMO misconceptions. 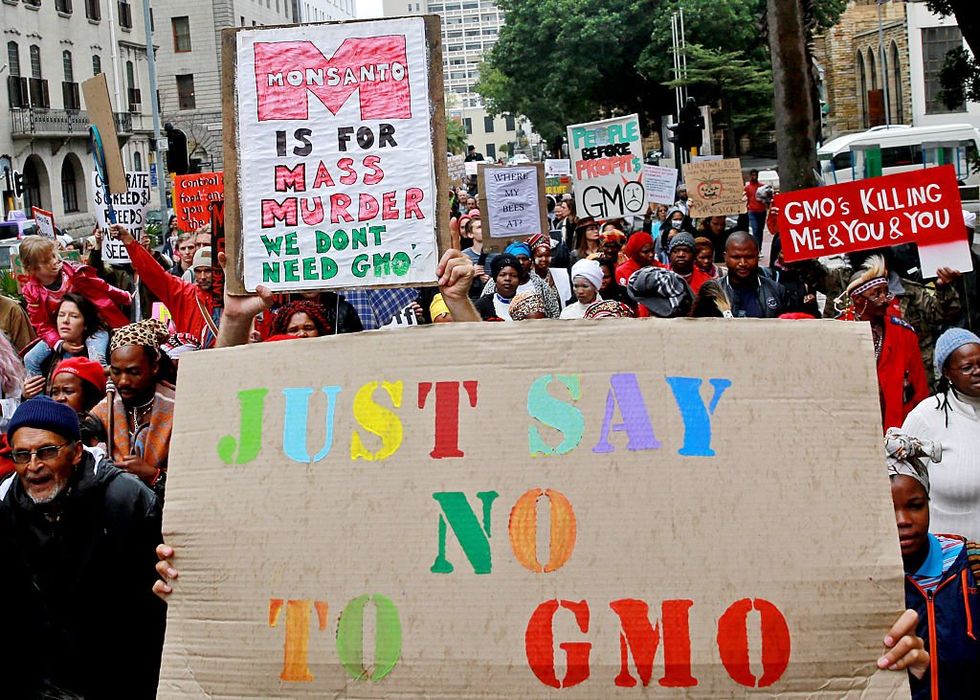 This Saturday marks the fourth annual March Against Monsanto, a coordinated global day of protests that’s largely focused on GMOs (short for “genetically modified organisms”). The world’s largest provider of GM seeds, as well as an ardent opponent of GMO labeling, Monsanto is a de facto stand-in for all things genetically modified. And while there are certainly significant reasons to oppose the massive corporation, a grassroots group of counter-protestors called March Against Myths wants to clear up some misconceptions.

Billing themselves as advocates for science—their catchphrase is “Taking Science to the Streets”—March Against Myths will stage their second annual counter-protest on Saturday, showing up at 20 March Against Monsanto events around the world.

The dueling protests are emblematic of a long-simmering debate about GMOs in the culture at large. Like abortion or Trump, it’s one of those hyper-nuclear topics that can drive people from zero to livid in a hot second (you’re probably angry right now!). The problem is that many of us don’t understand the issue as well as we think we do. In an old Jimmy Kimmel bit, farmers’ market shoppers were asked what they think GMOs are. Hapless responses included: “food that’s somehow contaminated,” “general modified ingredient,” and “some corn bad stuff.” The gag is literally low-hanging fruit, but the point remains: GMOs are one of the most provocative—yet misunderstood—topics of our times.

A quick primer: GM foods have been tinkered with on the most essential level—their DNA. For many people, this is unsettling, a sign that we’ve pushed the boundaries of science and food to an undesired frontier. Instead of weird, unrecognizable ingredients in our sandwich bread, or chicken that’s jacked up with antibiotics, consumers increasingly want straightforward, basic food—and GMOs seem to be the opposite. On the flip side, there is currently strong consensus in the scientific community that there are no demonstrably negative effects of GM foods on the human body. None. (A 2012 study of GMOs claimed to have found tumors in rats but was roundly debunked.) Some would argue we should’ve waited to consume GMOs until we had studied their long-term health effects. We’re well past that moment now, though.

We caught up with Kavin Senapathy, one of March Against Myth’s founders, to learn more about their efforts and hear their side of the GMO story.

You are marching against a march against Monsanto. Does that mean you are pro-Monsanto?

No. If anything, it’s a Monsanto-neutral march. We aren’t pro- or anti-Monsanto at all. We’re just trying to spark discussions about scientific myths, and to correct misinformation.

Are you looking to engage in direct dialogue with the opposition?

The reason we go to this march isn't necessarily to engage participants themselves. I mean, we empathize and have compassion for these people. Most of them have legitimate health concerns for themselves and their families. But many of them are pretty far down the rabbit hole. There are anti-vax people, people who believe in chemtrails, they even just posted something on their web page from a moon landing denier. We’re more interested in raising general public awareness that there are two sides to the (GMO) issue.

What is the harm in GMO misconceptions?

They influence public perception, which in turn influences policy. This keeps consumers from getting Golden Rice and other nutrient-fortified crops, and puts a damper on innovating new products. I would love to see smaller agriculture companies and farmers competing in this arena so we could have things like tear-free onions and non-browning avocados. Regulations are so stringent, though, it’s very difficult to get these things from research to market.

Besides “these people aren’t really listening to reason or science,” what is it about Monsanto that really gets under people’s skin?

I think Monsanto is really a symbol of everything people fear, hate, and don’t understand about the food system.

What about some of Monsanto’s less savory practices, like herbicide-resistant seeds that make it difficult for farmers to break free of dependence?

I do believe some of their practices warrant scrutiny. I've been called a “shill for tiny ag” in the past because I really do believe that more competition is in order. But there are also many myths, like that Monsanto sues farmers for unintentional crop pollination. Monsanto has never sued for any kind of crop pollination. When you kind of unpack some of what people think, you find a lot of myth.

Last year was your first counter-protest. How did it go?

Most people I had conversations with had legitimate concerns. They’re just regular people who have concerns about their families, but at some point they fell down a rabbit hole of misinformation. We did face some vitriol and hate too, but did our best to volley back with kindness. Easier said than done. All we can do is try.

Do you fear violence?

Last year, the police presence was pretty good, so we’re hoping for a repeat of that. I did get a scary death threat before the march last year though, so we’ll see. We have a strict code of conduct where we make it very clear what we expect from March Against Myths participants. We are not okay with any kind of violence; we try to make sure no one even gets angry.