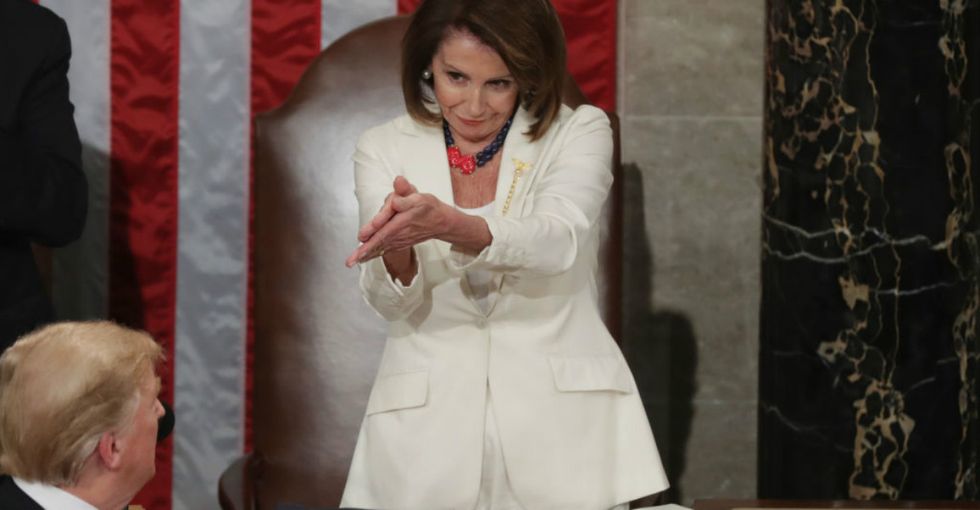 House Speaker Nancy Pelosi just sent shockwaves through the political establishment that could simultaneously create space for more bipartisan cooperation with Republicans while also aggravating her base of progressive lawmakers -- especially those who came to power after the historic 2018 midterm elections.

In an interview with The Washington Post, Pelosi said she has no plans to impeach President Trump, telling the paper:

I’m not for impeachment. This is news. I’m going to give you some news right now because I haven’t said this to any press person before. But since you asked, and I’ve been thinking about this: Impeachment is so divisive to the country that unless there’s something so compelling and overwhelming and bipartisan, I don’t think we should go down that path, because it divides the country. And he’s just not worth it.

It’s an interesting political argument which essentially comes down to saying don’t take Trump seriously as a figurehead and instead focus all your energy on defeating his policies and eventually defeating him as a candidate in 2020.

However, impeachment is also a driving force for Pelosi’s progressive base. The “news” as she put it will only harden the views of some further to the left that Pelosi and the old guard of Democratic lawmakers are not strong enough in their opposition of Trump and are therefore out of touch with their own party’s values and priorities.

Pelosi addressed the concern of whether Trump’s presidency has permanently damaged American institutions or put our country is a perilous state, arguing:

“No. Here’s why I don’t: Our country is great. It’s a great country. Our founders gave us the strongest foundation. … All the challenges we have faced, we can withstand anything. But maybe not two [Trump] terms. So we have to make sure that doesn’t happen.”

However, Pelosi did not mince words when she was asked if she thinks Trump is “fit” to serve as commander-in-chief:

“But again, this is coming across too negatively. I don’t usually talk about him this much. This is the most I’ve probably talked about him. I hardly ever talk about him. You know, it’s not about him. It’s about what we can do for the people to lower health-care costs, bigger paychecks, cleaner government.”