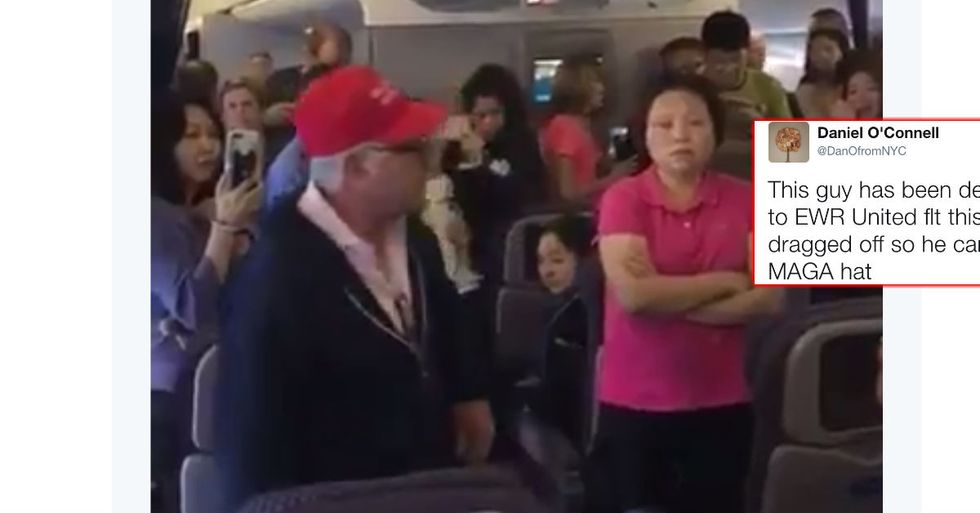 During a United Airlines flight from Shanghai, China, to New Jersey, an unnamed passenger reportedly became disruptive. Before the flight was over, he’d become a viral meme, but not in the way he’d hoped.

First, he tried to take another passenger’s seat, screaming, “I am entitled to that seat!” Then, he started calling people names, such as “moron,” “Hillary,” and “lesbian.” All along, he insisted he was real victim and would sue the airline for the way he was being treated.

And, of course, he did it all while wearing a “Make America Great Again” hat.

By the time law enforcement officials dragged the obnoxious guy off the plane, other passengers were chanting, “Lock him up! Lock him up!”—a play on the now infamous chant made by Trump supporters in reference to Hillary Clinton.

“He just wanted United to do something, anything, that would allow him to sue them—he even said so more than once,” passenger Elizabeth Aulenbach told CBS News.

Video of the passenger quickly went viral and provided United Airlines with some essential cover, all but necessary after the now infamous video of another passenger being violently dragged from his seat after refusing to give up a spot he’d already paid for.

“We're grateful for the patience shown by our customers who endured the disruptive behavior of this passenger, as well as the exceptional poise and professionalism of our flight crew," United Spokesman Jonathan Guerin said.

From Your Site Articles
Trending Topics
THE DAILY GOOD
Start your day with something GOOD.
Trending Stories
Health