This school found a clever way to use its cafeteria waste to help its neediest students.

This should happen at every school. 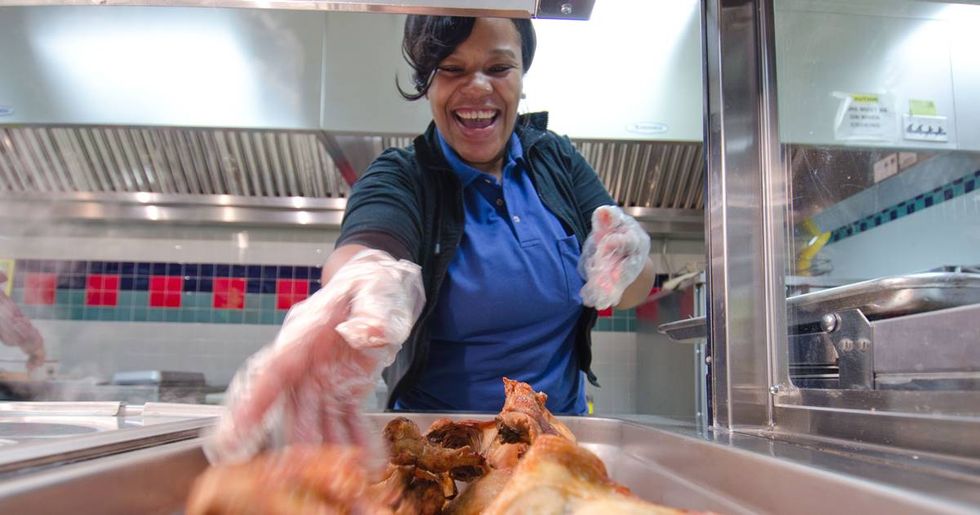 There are two shocking facts about the United States of America that should never live side-by-side: Americans waste billions of pounds of food each year while children go hungry.

According to the USDA’s Economic Research Service 30 to 40% of food in the U.S. goes uneaten. In 2010, that accounted for approximately 133 billion pounds and $161 billion worth of food.

While all of this food is rotting or simply being thrown out, more than 12 million children in the United States live in “food insecure” homes.

A nonprofit in South Bend, Indiana has found a smart way to bridge that gap. Cultivate is helping to feed 20 students at Woodland Elementary in Elkland by reclaiming food from the school’s cafeteria.

Children at Woodland Elementary are served breakfast and lunch every day at school. But some have little to eat over the weekend. So Cultivate gives them backpacks with eight frozen meals every Friday tide them over until Monday.

“Mostly, we rescue food that’s been made but never served by catering companies, large food service businesses, like the school system,” said Jim Conklin of Cultivate told WSBT. “You don’t always think of a school.”

“At Elkhart Community Schools, we were wasting a lot of food,” said Natalie Bickel, student services. “There wasn’t anything to do with the food. So they came to the school three times a week and rescued the food.”

“Over-preparing is just part of what happens,” Conklin said. “We take well-prepared food, combine it with other food and make individual frozen meals out if it.”

The program has been so successful, the Elkhart school system is looking to expand it to other schools.

Looking to reduce the amount of food you and your family wastes? Here’re some tips from the Environmental Protection Agency.