The Case for an International Moon Base

A lunar base might sound like science fiction, but it’s time to give the idea a shot. 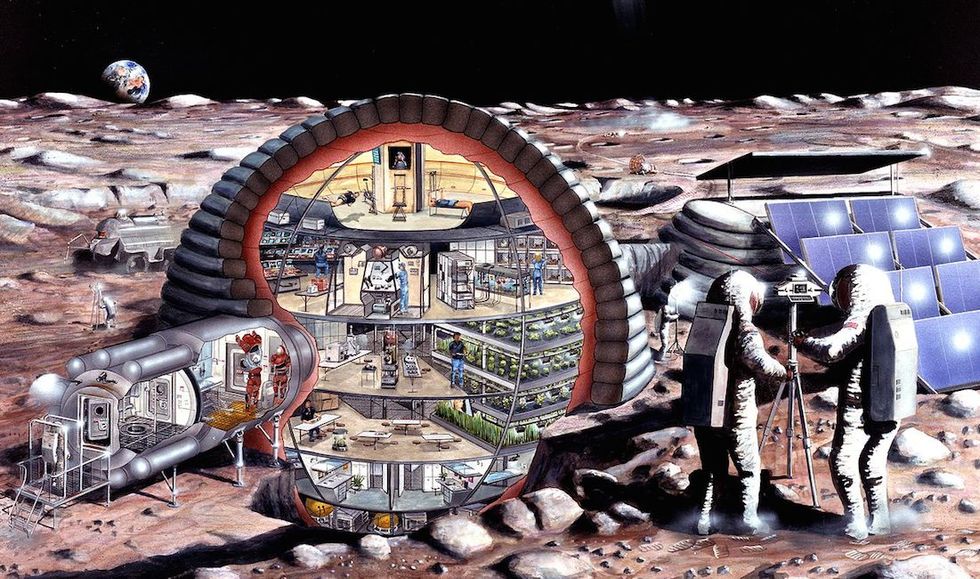 Toward the end of 2015, officials from Russia’s space program announced plans to begin a series of lunar missions that would culminate in the creation of a manned moon base by 2030. To many, this project sounded absurd. To start with, although until recently Soyuz rockets were the only real game in town for moving men and large cargo shipments into space, Russia’s space program hasn’t visited the moon in decades—and it’s an absolute mess of corruption and failure. But more important, the last time moon bases showed up prominently in the news was when Newt Gingrich teased the idea of building an American lunar colony—and maybe future lunar state—during his 2012 primary campaign in a speech to Florida’s Space Coast (which had just witnessed the last flight of the American space shuttle). This idea was publicly shredded as an impractical, pandering joke. Many could believe a moon base might exist, say, by the end of the century, but Gingrich and Russia’s ambitions seemed preposterous in the here and now. Yet there’s actually a lot of global scientific support for building a manned lunar base in the near future, as well as a trove of data suggesting that we have the tech and could scramble together the cash for it.

Humanity has arguably had designs on the moon for centuries. And the idea of a moon base was certainly a fetish of science fiction by the early to mid-1900s. But thanks to recently declassified documents, we know that the first serious plans to create a moon base originated in 1959 (by no coincidence the year the USSR put the first manmade object on the moon) with the U.S. military’s “Project Horizon” proposal. A supreme manifestation of Cold War arms race paranoia, the plan was predicated on the idea that we had to beat the Soviets to the weaponization of space by creating a bombardment system on our nearest satellite. This wasn’t a wild idea floated in one meeting—there are over 400 pages of typewritten notes mapping out the details about how such a base would be plotted, constructed, and provisioned. Planners hoped they could begin the project by 1964 and have their base operational by 1969—the year we actually got around to putting a man on the moon. Horizon wasn’t an isolated uber-moon-shot proposal either. Within the next decade, academics and the U.S. Air Force had both toyed with moon-base projects as well.

A 1989 artist’s depiction of an inflatable module for a lunar base, via Wikimedia commons

It’s easy to brush off these early grabs at lunar real estate as manifestations of the same overambitious, ill-informed, paranoid impracticality that gave us duds like Ronald Reagan’s Strategic Defense Initiative. But the idea of a moon base never died. Over the decades it was mulled over, repurposed, and refined from a terrifying militaristic dream into a scientific hope. Academics and idealists alike believe that a moon base could be a vital aid to deep-space exploration, allowing us to easily construct and launch craft from a low-gravity environment and giving us a station to test and habituate astronauts for long voyages, like those to Mars. A moon base would also allow us to run trials of the technology necessary for everything from asteroid mining to Martian colonization—both popular dreams in the mass consciousness—without moving too far from Earth. Beyond space exploration, a moon base would also be a boon to science, allowing us to better study things like cosmic rays, distorted on Earth by our atmosphere, or to set up arrays of ultrapowerful telescopes to yield fantastic images of the skies.

With these visions in mind, by 2006 NASA was openly talking about building a moon base by 2026. This idea, as well as most of the Bush-era Constellation space program, was eventually scuttled by the Obama administration, which refocused on exploring asteroids and going straight to Mars without stopping at the moon. But support for some kind of moon base persisted amongst Americans in the space industry, and in 2012, NASA started talking about creating a base in a stationary spot stationary spot on the far side of the moon. In December, Congress provisionally approved a $55 million budget for NASA to develop habitats for potential use on or around the moon and Mars.

Prototype for an inflated lunar habitat, via Wikimedia Commons

American space wonks aren’t alone in this decades-long obsession with moon bases. In 2014 the European Space Agency began studying technologies that could be used to build a lunar base. (Some of the ideas generated through this project, like a robotic 3D printer using moon dirt to create a habitat around a bladder-like internal scaffolding are, well … space-age, man.) The ESA has also expressed interest in collaborating with Russia on its moon ambitions—as had other nations like China, India, and Japan, in the past—and has helped the Russians scour the moon’s poles for water sources to aid in their plans. This potential cooperation, still floated even amidst deteriorating European Union-Russian relations over the past few years, shows the potential for building common ground and a basis for practical diplomacy within a moon base—an ostensibly purely scientific long-shot project.

You might think these are still dream projects—that the challenges of building in space and protecting astronauts from the risks of living without an atmosphere or magnetosphere would be incredibly costly. While official agencies have largely been mum on price estimates, independent analyses suggest these projects would cost a lot compared to annual individual national space program budgets—but not a lot in global terms. In a 2009 study, the Center for Strategic and International Studies suggested a lunar base would cost $35 billion to construct (sans the price of rockets, pre-planning, and design) and $7.35 billion a year to maintain. More recently, a July 2015 study by NexGen Space LLC, funded in part by NASA and reviewed by a number of independent experts, brought that construction number down to $10 billion.

1977 lunar base concept from NASA, via Wikimedia Commons

Under the NexGen plan—the current darling of space optimists—robotic construction could begin by 2021, with humans working at a fully operational base by 2031. Public-private partnerships and the advance of technologies like Elon Musk’s reusable rockets are key to the plan’s projected low costs. And NexGen seems to think that the station could pay for itself—not just in scientific and exploratory value, but via mining rare isotopes that are common on the moon, like helium-3, a potentially ideal fuel for fusion power projects, and perhaps eventually via lunar tourism and other simple rent-seeking ventures.

NexGen’s belief in the ability of a moon base to fund itself is a bit aspirational—especially as we haven’t really gotten a sense of the quantity or accessibility of isotopes on the moon, or established a great market for them on Earth. But even if it’s a little optimistic to buy into space wonks’ dreams of moon bases, at least we know there’s enough support for the idea that it has become theoretically viable—and, scientifically speaking, potentially pragmatic to valuable. But more than that, in terms of moon-shot cultural inspiration, a moon base is a more realizable and immediate goal than, say, the colonization of Mars. If we focus on a moon base first, not only could it (in the long term) aid Mars missions, but it could also instill the pride, excitement, and confidence to drive forward space exploration and boost the feasibility of colonizing other cosmic bodies. There’s a lot, in short, to be gained by setting up shop on the moon, even if it does turn out to be a cash suck for a couple of decades. We’ve wasted billions more as a species on much less useful things. So rather than balk at what seems like a sci-fi fantasy, let’s all get ready to advocate for a future of moon construction, and dream shamelessly of lunar vacations and homesteading in space.