Various theater and performance based programs are dramatically improving students’ literacy skills across all age groups. 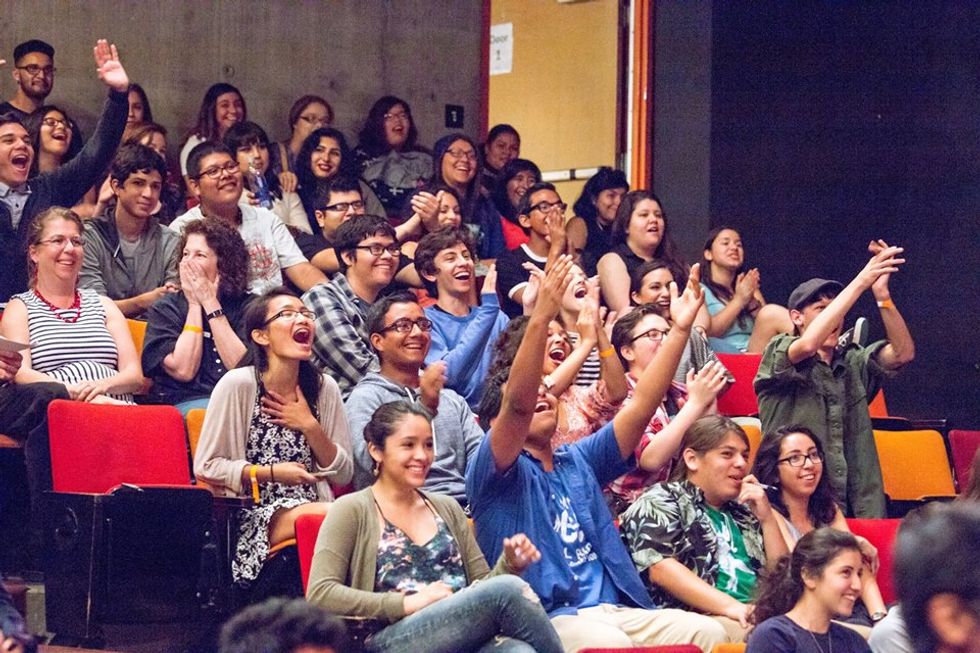 This story is part of an ongoing campaign called the Alphabet of Illiteracy. By using letters themselves—the foundation of reading and writing—Project Literacy examines the ways illiteracy underpins some of the greatest challenges facing the world today. Below, we explore the letter P for “performance.”

Get Lit and other performance based programs are dramatically improving students' literacy skills. Photo courtesy of Get Lit

Three years ago, eleventh-grader Pathum Madigapola was on the verge of dropping out of school. “I felt everyone was against me,” he says. “A lot of schools seem to have this standard on how everything should be learned and it limits the creativity.” He was interested in creative writing, but he didn’t have many opportunities to explore that interest.

Then he saw a performance by the Get Lit Players, a Los Angeles-based teen performance troupe that combines classic poetry and modern spoken word to create and perform original work. He made the troupe on his second audition, and he says Get Lit inspired him to keep trying and stay in school. “Get Lit turned things around because it gave me a creative outlet,” Madigapola says. “I could be funny, I could be sad, I could be angry. It’s such a safe environment.”

Now Madigapola is a sophomore studying film at Los Angeles Pierce College, and says he’s not only learned how to write and edit better but how to make a good impression. “My teacher helped us learn how to deal with people, how to be on time for everything and project and make direct eye contact,” he says.

In classrooms and auditoriums across the country, theatre and spoken word bring reading and writing to life in ways that words on a page often don’t by themselves. For instance, in Brooklyn, New York, Malenkaya Kompaniya, encourages children of Russian descent to learn Russian through theatre, not just from a book or their parents. In Douglas County, Colorado, the library brings free theater productions based on literature to promote early literacy in schools and libraries through Page to Stage Productions.

“A lot of our students are severely at risk, they come from very bad neighborhoods and have to deal with violence on their streets and homelessness,” says Get Lit’s marketing and communications manager Veronika Shulman. “Then we also have students who do come from privilege but have their own struggles being over-sexualized by the media or feeling so much pressure to succeed, it gives them crippling anxiety.” Much of spoken word is focused on activism, so the genre gives voice to the issues and ideas participants care about.

In spoken word, writing is just as important as performing and competing in poetry slams (competitions where poets recite original works) motivates Get Lit participants. “The competition serves as an inspiration for them to try harder to have a deadline, get it polished, work on it,” Shulman says. “It teaches them to finish a task and serves as a guide for them to have this repertoire of things that they can perform.”

The Get Lit Rising book features poetry by 19 participants (their poems are reactions to classic poems), and a handful of participants have even performed on the Queen Latifah show, opened for John Legend and filmed a PSA for the UN. “As of now, we’re the most viewed spoken word poets in the world,” Shulman says. “That’s pretty cool considering that our kids haven’t even graduated from high school.”

Although they don’t work exclusively in low-income areas, YPT’s schools are mainly Title 1 schools and many of its students are minorities (a third speak English as a second language). “What we’ve seen is that despite countless studies showing the benefits of integrating the arts, creative writing is still vanishing from classrooms and vanishing disproportionately from students in low-income areas or students of color,” says executive director Brigitte Winter. “We make our decisions about which schools to bring this program to with that in mind.”

For many of these students, YPT marks the first time they’re encouraged to write about whatever they want without censorship. “Treating those stories with value can do wonders for students’ engagement in the educational process and trigger amazing advances in literacy,” Winter says.

That philosophy seems to work. During the 2013-2014 school year, middle school students demonstrating Exemplary or Proficient skill in using elements of language such as spelling or diction to communicate character traits rose from 34 to 63 percent over the course of the in-school playwriting program. Older and younger students also showed improvement in their writing skills.

Nora Spellane, 22, is a YPT alum who’s now working as a professional actor and stage manager in Washington, D.C. She says her experience in YPT helped inspire her to pursue theatre as a career and honed her writing skills. “It made me more observant, more critical, also a better editor because I learned to be really strict about what needed to be in the piece and what didn’t,” she adds.

The goal of these programs isn’t to create actors, poets or playwrights but to give them skills to succeed in life, whatever path or profession they choose. “The most exciting stories about our students tend to be students who go on to do things that have nothing to do with playwriting,” Winter says. “We have a student who went on to study neuroscience and talks about his experience being validated by adults and gaining confidence and critical thinking skills.”