Not only do they pursue the drone and knock it out of the air, but the tigers then feast on it 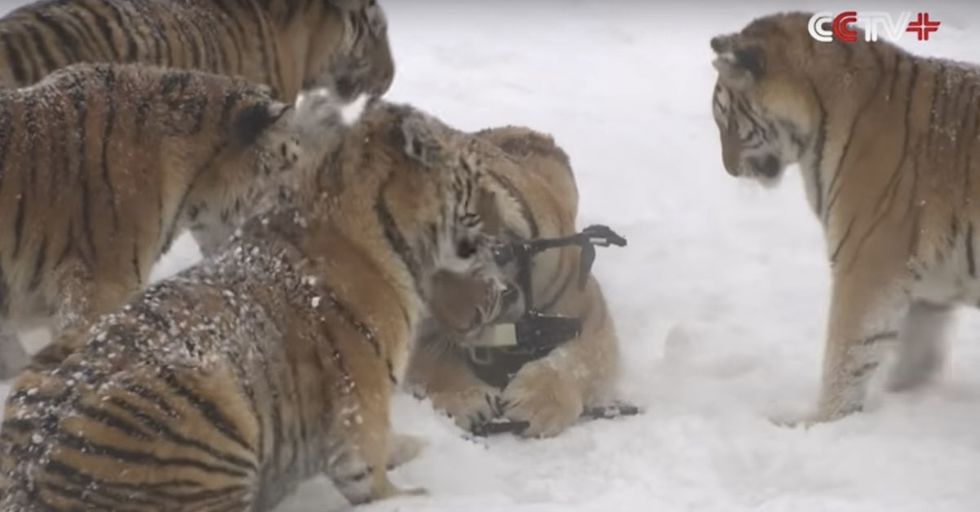 Technically, a pack of tigers is known as an “ambush,” and it won’t take long for you to see why in this video. The feline collective, enclosed at the Harbin Siberian Tiger Park. If you’re thinking that these tigers may have gone soft while held (somewhat) captive, think again.

Normally, drones fly high enough that they aren’t in danger of being attacked by, well, anything on the ground, but these tigers pursue the foreign presence with laser-beam focus and incredible speed.

And as you can see from this wider shot, taking from the facility’s CCTV system, all it took was a slight dip in the drone’s path, a big leap from a tiger, and a well-timed paw swipe for the drone to come crashing down.

Once the object fell to the ground, the pack immediately began to rip apart and eat the carbon-fiber frame. Truly vicious, not to mention impressive.

I know it doesn’t make any sense at all to feel sorry for a mechanical drone, but it’s hard not to. The little guy probably just wanted to fly over canyons and meadows, yet ends up in the stomach of hungry tigers just because the pilot flying it dipped just a little too low.

The enthralling video shows the flight, pursuit, and downfall of the drone by the paws and teeth of some very vicious cats.