After years of denying U.S. intelligence, Trump finally admits that Russia helped him win the election.

Trump then re-posted the tweet, claiming it was correcting a typo from the first one. 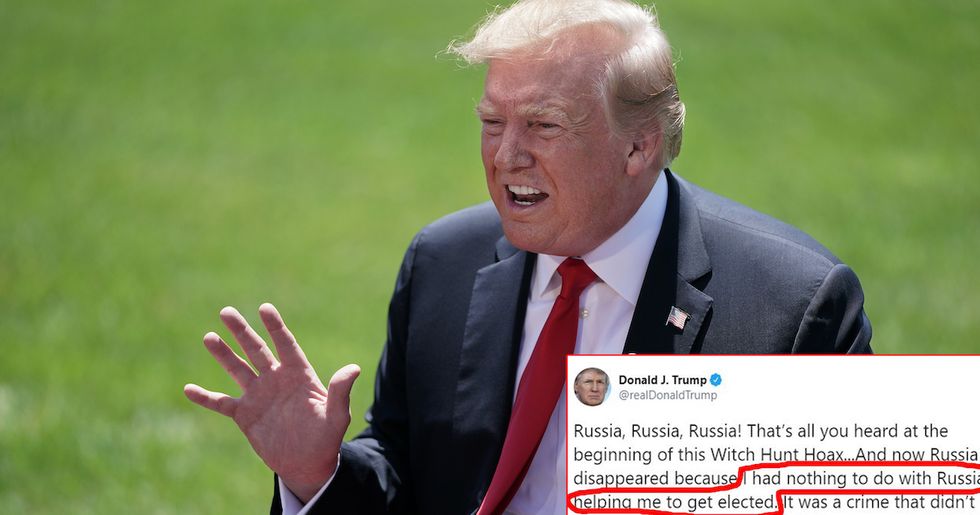 Robert Mueller broke two years of public silence this week when he announced he was shutting down the special counsel investigation into Russian interference in the 2016 election.

During his address, he clarified the results of his 400-plus page report on the matter of obstruction of justice. Mueller noted he “would have said so” if his team “had confidence the president clearly did not commit a crime.” Simply put, the special council’s office couldn’t charge President Trump with any crimes because Justice Department policy prohibits indicting a sitting president.

In his report, Mueller outlined ten ways in which the president may have criminally obstructed justice.

In response to the conference, many now believe that Mueller’s comments were a not-so-subtle call to Congress to impeach the president. Congress has the Constitutional authority weigh in on the matter of a president’s criminal conduct while the Justice Department cannot due to long-standing policy.

Mueller’s remarks appear to stand in stark contrast to Trump’s recently appointed Attorney General William Barr who said the report “does not conclude the president committed a crime.”

In a remarkable turn of events, Trump responded to Mueller’s press conference by, seemingly inadvertently, admitting that Russia helped him win the 2016 election. For the past three years, Trump has either denied that Russia was involved in any election meddling or that it interfered, but it had no bearing on the election.

Eight major intelligence agencies have all come to the conclusion that Russa interfered in the 2016 presidential election.

“Russia, Russia, Russia! That’s all you heard at the beginning of this Witch Hunt Hoax...And now Russia has disappeared because I had nothing to do with Russia helping me to get elected,” Trump tweeted.

“Could this be Obstruction? No, Mueller didn’t find Obstruction either. Presidential Harassment!”

Trump made the admission via tweet and then quickly deleted it. He reposted it shortly later, correcting a typo (changing “acquisition” to “accusation”). In the second version, he still didn’t omit the phrase “had nothing to do with Russia helping me to get elected.”

Trump’s admission that he believes Russia helped him win the election has many implications; the biggest being: Why did a sitting president lie to cover up an attempt by a foreign power to undermine U.S. democracy?

If we are going to throw around the “T”-word (Treason!) this seems like the time.

Trump walked back his comments while addressing reporters while en route to Airforce One for a flight to Colorado Springs, Colorado. “Russia did not help me get elected,” Trump told reporters. “Russia didn’t help me at all. Russia, if anything, I think, helped the other side.”

There is no evidence that Russia helped Hillary Clinton during the 2016 election.

In Mueller’s press conference he reiterated the seriousness of Russia’s attack on American democracy and how those who stand in the way are allowing them to get away with a serious crime.

“The matters we investigated were of paramount importance and it was critical for us to obtain full and accurate information from every person we questioned,” Mueller said. “When a subject of an investigation obstructs that investigation or lies to investigators, it strikes at the core of the government’s effort to find the truth and hold wrongdoers accountable.”

As Americans, we need to demand that the president fight back against those who attack us instead of continuing his charade that does nothing but allow our most sacred of institutions be tarnished.