While the “fastest growing refugee emergency in the world” may seem dire, there’s still plenty you can do to help. 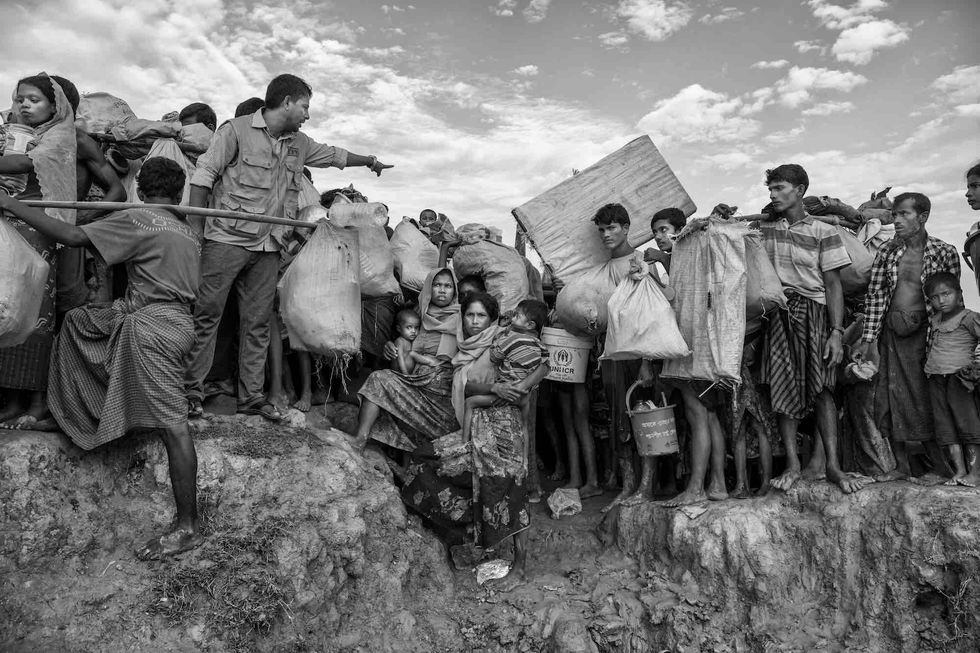 Rohingya Muslim refugees wait to proceed after crossing the border from Myanmar into Bangladesh. Photo by Kevin Frayer/Getty Images.

While the “fastest growing refugee emergency in the world” may seem dire, there’s still plenty you can do to help.

While the dominant discourse in much of the media seems focused on the antics of President Trump, there’s another major news story that is being largely ignored: the Rohingya.

After more than 50 years of religious persecution, these Muslims in Myanmar face what the United Nations has referred to as a "textbook example of ethnic cleansing" by the country’s leaders. The Rohingya, approximately one-million strong and with their own culture and language, are a minority among Myanmar’s total population of more than 52 million, the majority of whom are Buddhist.

While the Rohingya have faced discriminatory practices for decades, a dramatic surge in violence has spurred a mass evacuation. Beginning on Aug. 25, 2017, Myanmar military and local militia began targeting the Rohingya in what the U.N. has called “clearance operations,” killing upwards of 6,700 people in just one month, according to Doctors Without Borders.

“We met and spoke with survivors of violence in Myanmar, who are now sheltering in overcrowded and unsanitary camps in Bangladesh,” said Dr. Sidney Wong, medical director of the organization. “What we uncovered was staggering, both in terms of the numbers of people who reported a family member died as a result of violence, and the horrific ways in which they said they were killed or severely injured.”

Survivors report that Myanmar security forces are raiding their villages, raping women, brutally murdering families, and then torching the remains of the community so that the Rohingya will be unable to return. The BBC featured a specific account from Rashida Begum, who said that soldiers tried to cut her throat and killed her baby as they stormed the village of Tula Toli.

As the Rohingya flee their home state en masse, most head to Bangladesh; approximately 647,000 refugees have arrived at their neighbor to the north since Aug. 25, 2017, the USA for UNHCR, the U.N. Refugee Agency reports. This influx of people has caused the Rohingya population in Bangladesh to grow nearly three-fold over the course of just five months.

GIF via the USA for UNHCR, the U.N. Refugee Agency

Prior to this evacuation, the Rohingya were concentrated along the country’s western coast in the Rakhine State. “The least developed of the 14 states and regions in Myanmar,” Rakhine is characterized by “widespread poverty, weak infrastructure and a lack of opportunities for employment and income generation,” according to the International Organization for Migration.

The Council on Foreign Relations reports that “the Myanmar government has effectively institutionalized discrimination against the ethnic group through restrictions on marriage, family planning, employment, education, religious choice, and freedom of movement.” (For instance, the Rohingya aren’t recognized as citizens of Myanmar. They must ask for permission to get married — and in certain towns, they are limited in the number of children they are allowed to have.)

Even for the Rohingya who do make it out of Myanmar, dangers abound. The United Nations Security Council estimates that at least 107,000 refugees now live in parts of Bangladesh that are highly susceptible to landslides and flooding when monsoon season begins in March.

“We are now in a race against time as a major new emergency looms,” said U.N. High Commissioner for Refugees Filippo Grandi.

While you may feel helpless watching what the U.N. has referred to as the “fastest growing refugee emergency in the world” from thousands of miles away, there are many organizations collecting money and donations to aid refugees in need.

Here are a few suggestions to get you started:

This organization has worked in Bangladesh since 2007 to provide refugees with hot meals and water, malnutrition screenings, mental health counselors, and sanitation and hygiene supplies. Donate via their website.

This medical organization has provided basic health care and vaccination services to the Rohingya well before the start of the current crisis, but the need for donations now is greater than ever.

The Doctors have seen an outbreak of diphtheria among Rohingya refugees, which must be addressed by treating those with the disease separately from the rest of the camps in order to avoid infecting those who are healthy. Help them accomplish this by donating now.

This Bangladesh-based emergency response group builds toilets and wells, provides medical treatment and child-safe spaces, and distributes much-needed supplies such as lamps, buckets, sleeping mats and sanitary pads to refugees in need. Set up a one-time or recurring donation via their website.