Alan Turing will appear on the 50-pound note nearly 70 years after being persecuted for his sexuality.

Honor the legend. Never forget the injustice he endured. 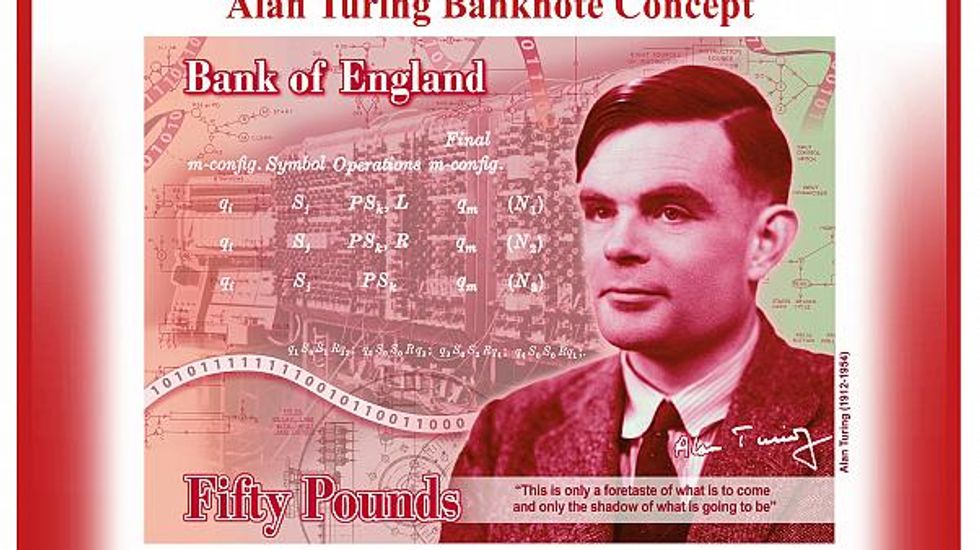 There’s no great way to say, “I’m sorry for persecuting you because of your sexuality,” but putting someone on the national currency is a good start.

Mathematician and computer scientist Alan Turing was chosen to grace Britain’s new £50 note. Turing’s advancements in the field of computers were overshadowed by the treatment he received because of his sexuality. Now, Turing is finally getting the recognition he deserves.

During WWII, Turing’s codebreaking work helped crack Germany’s Enigma code. Turing is also called “the father of computer science” for his work in the development of early computers. Turing helped create the concept of the algorithm, as well as his work in the field of AI. The Turing Test, which is named after him, determines if a machine is “intelligent” or not.

"Alan Turing was an outstanding mathematician whose work has had an enormous impact on how we live today," Bank of England governor Mark Carney said. "As the father of computer science and artificial intelligence, as well as a war hero, Alan Turing's contributions were far-ranging and path breaking. Turing is a giant on whose shoulders so many now stand."

Turing isn’t just the father of computer science. He also suffered because of Britain’s repressive Victorian-era homosexuality laws. In 1952, Turing was convicted for having an affair with another man, then forced to undergo chemical castration. Turing killed himself because of it in 1954. He was pardoned posthumously in 2013.

The fact that Turing’s face was chosen to appear on money shows just how much times have changed. The government is honoring Turing for his accomplishments instead of punishing him for his personal life.

"This is a fitting and welcome tribute to a true Manchester hero. But more importantly I hope it will serve as a stark and rightfully painful reminder of what we lost in Turing, and what we risk when we allow that kind of hateful ideology to win,” said Former Manchester MP and gay rights campaigner John Leech. Leech also campaigned for Turing’s pardon.

People on Twitter are happy that Turing is finally getting credit where credit is due.

Alan Turing died in 1954, two years after being convicted under Victorian laws against homosexuality and forced to… https://t.co/7ZYQZD7EFh
— Sarah Mervosh (@Sarah Mervosh) 1563189827.0

The new note will enter circulation by the end of 2021. The note will be made of polymer instead of paper as an effort to thwart counterfeiting.