If This Adorable Dog Can Take Public Transportation, So Can You

From Seattle to Moscow, cats and dogs are taking incredible journeys on the world’s busiest transit systems. 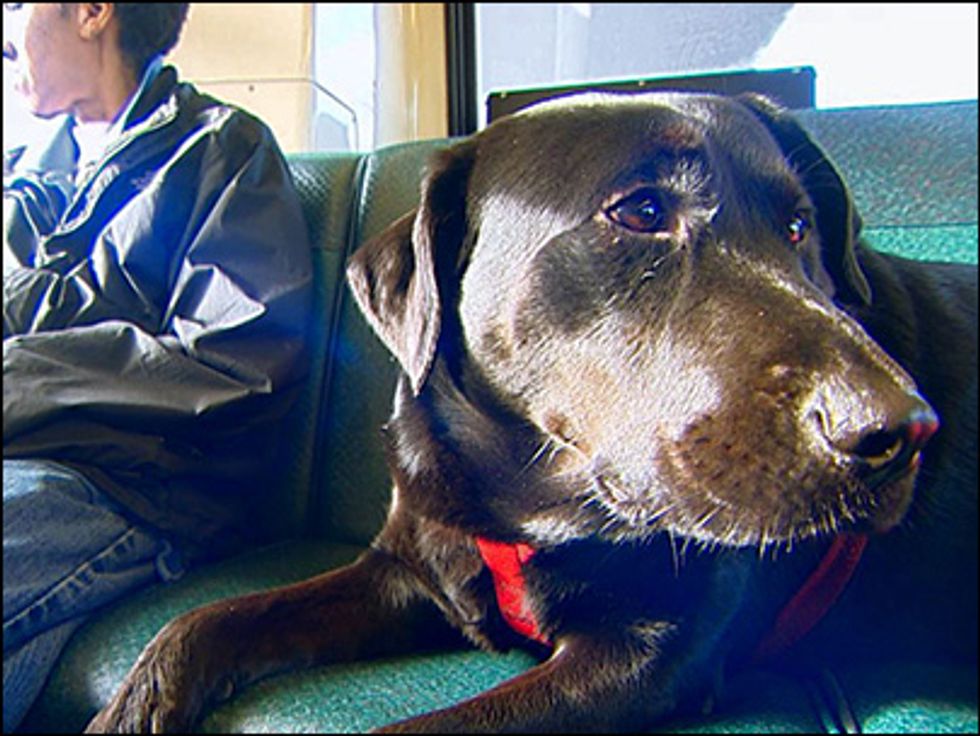 You know what they say: “Take a dog to the park and she’ll play for a day. Teach a dog to take the bus to the park, and she’ll play for a lifetime.” While many dogs struggle with basic housetraining, in Seattle, a two-year-old pup named Eclipse is making headlines for learning how to take the bus all by herself. After seeing the dog board and exit the vehicle alone, commuters began to puzzle over the independent canine, who eventually caught the eye of local radio DJ Miles Montgomery. “The dog gets off at the dog park.” Montgomery told Seattle’s KOMO4. “I just look out the window and I'm like, ‘did that just happen?’ She was most concerned about seeing out the window, and I couldn't figure out what that was. It was really just about seeing where her stop was.” Eclipse, a serious-looking black lab/bull mastiff mix, has become a well-known and beloved presence on the city’s D-line buses. “All the bus drivers know her,” said fellow rider Tiona Rainwater, “How could you not love this face?”

On the way to the park one day, Jeff Young, the dog’s (got to be honest, kind of irresponsible sounding) “owner” stopped for a smoke, and Eclipse, not about to enable such an unhealthy habit, bounded ahead, boarding the bus without him. Since then, she’s been taking more and more of her outings solo. “She’s been urbanized, totally. She's a bus-riding, sidewalk-walking dog,” said Young. “Probably once a week I get a phone call. ‘Hi, I have your dog Eclipse here on 3rd and Bell.’ I have to tell them, 'No, she's fine. She knows what she's doing.’”

But as impressive as Eclipse’s transportation routine may be, this isn’t the first time we’ve seen straphanging animals. In Moscow, many stray dogs have learned the ins and outs of the city’s 80-year-old subway system, the fourth busiest rapid transit system in the world. Reportedly, the animals—otherwise known to be an unruly bunch—make for respectable commuters, intermingling with human passengers casually, and going about their business with aplomb. Biologist Dr. Andrey Poyarkov has been studying these subway dogs for over 30 years. “In Moscow there are all sorts of stray dogs, but…there are no stupid dogs,” Poyarkov told ABC News in 2010. “The street is tough and it's survival of the fittest," he added, “These clever dogs know people much better than people know them.”

Cats, too have learned the joys of public transportation; in 2011, a woman in England’s Dorset County was amazed to find out her Dodger, aptly named after the artful Oliver Twist character, had been riding the local buses. First lured into the bus station behind their house by treat-peddling affection hustlers looking to score a cheap pet off an unsuspecting tabby, Dodger soon graduated to hardcore motor-coach hopping. Fee Jeanes knew something was up when she hadn’t seen her cat all morning: “My daughter Emily told me one of her friends had just seen him on the bus at Charmouth,” Jeanes told the Telegraph. “I couldn't believe it and panicked. I got into my car to go off and look for him and then at that moment the bus pulled up near our house and lo and behold he got off.” Just like that. And this was no one-off incident. “That afternoon I saw Dodger climb on board another bus and I rushed to tell the driver. I was shocked when she told me Dodger was always on there.”

As people continue to move into more concentrated urban areas, so do animals, and it only makes sense that cats and dogs are riding our light rails and trolleys with ever more frequency. Last year, the New York Times reported: “More Americans used buses, trains and subways in 2013 than in any year since 1956, as service improved, local economies grew and travelers increasingly sought alternatives to the automobile.” So it’s no surprise that smart critters, no doubt drawn in by the reasonable fares and increased hours of service, are finding better ways of getting around. While the boost in overall public transit use is certainly a heartening development, more than half of the air pollution in the U.S. is still caused by automobiles, and in some cities (Los Angeles, where only one in 10 individuals doesn’t commute by car, I’m looking at you) people should seriously be asking themselves: “if a dog can learn how to take the bus, why can’t I?”