Bigot at supermarket says gay people end up in hell, gets savagely owned by a 7-year-old.

Innocent burns are the best burns. 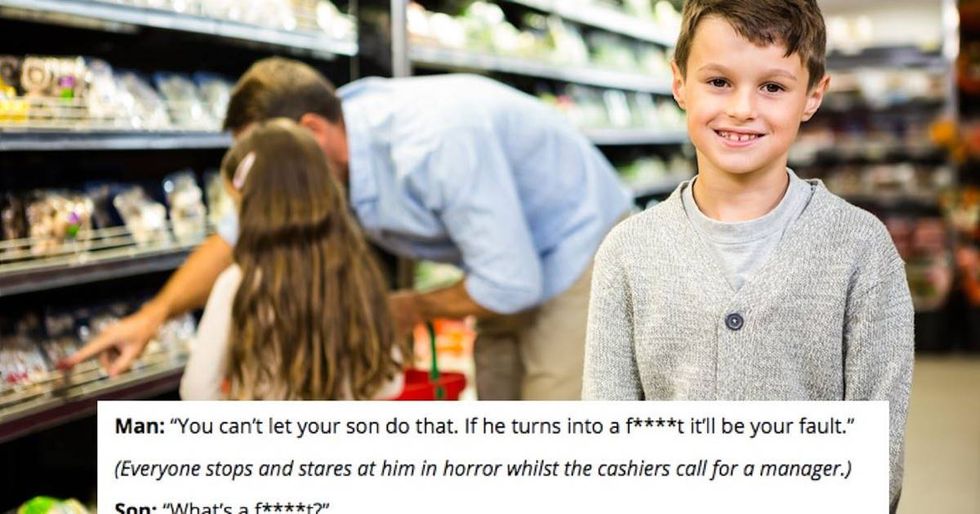 Sometimes the only way to be sure you’ve taught your kids right is when some idiot stranger tries to teach them differently. Take for example, the story of this dad in Bath, England whose seven-year-old totally stood up to a homophobe who couldn’t mind his business while waiting in line at the grocery store.

As the dad explains on Not Always Right, he took his son shopping to buy birthday presents for a girl in his class. They got her a wand, tiara, and jewelry for her to play dress-up, so while waiting in line the son put them on and pretended to be a queen.

Unfortunately, that was just too much for the jerk in the next line over.

Son: (In a posh voice) I’m the Queen and I say this line should move faster!

(I and a few others smile at his playfulness when a man in line at the next till yells at me.)

(Everyone stops and stares at him in horror whilst the cashiers call for a manager.)

Me: It’s a nasty word that only nasty people use so you mustn’t say it.

Man: It means you’re bad and going to Hell for being evil.

Me: It’s when a man loves a man and a lady loves a lady.

Me: Yep, just like Uncle James and Uncle Ian. They’re not bad, are they?

Son: My uncles make children better when they have poorly blood and poorly bones. If you make them go to Hell that means you want the children to be poorly.

(The manager and a security guard turn up but my son looks this man in the eye and holds his stare.)

(Everyone is now staring at my son. The man has gone red and is looking around.)

Manager: Sir, I believe you’ve just been outwitted by a child. You should leave now and keep your disgusting views to yourself and out of my shop.

Granted, not all gay people should have to save lives to live peacefully among their peers, but if this is how it needs to be explained to a grown idiot in a checkout line, so be it.