If Bill and Melinda Gates had a magic wand and could fix any problem, here’s what they’d choose.

“It changes everything in the family dynamic, and it changes the community, and ultimately you get these country-level effects where it’s good for everybody.” 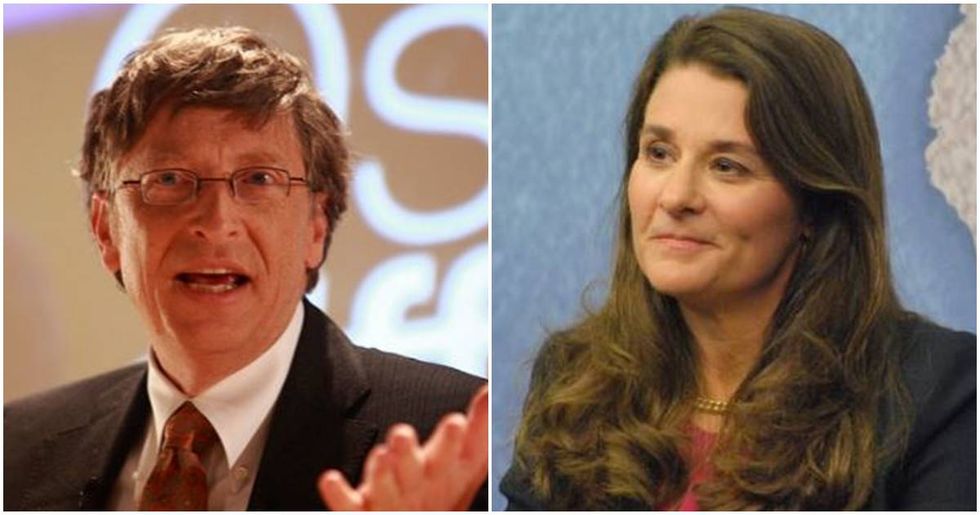 Photo by MDEF/Flickr and Chatham House/Flickr

On Tuesday, September 18, the Bill and Melinda Gates Foundation released its second Goalkeepers report highlighting global data to show the progress of humanity.

The report featured what many refer to as the greatest news story of our young century: the massive reduction in people living in extreme poverty. Since 1990, the percentage of people living on less than $1.90 a day has decreased from 36% to 9%.

However, the report also outlines the danger of falling into complacency:

To put it bluntly, decades of stunning progress in the fight against poverty and disease may be on the verge of stalling. This is because the poorest parts of the world are growing faster than everywhere else; more babies are being born in the places where it’s hardest to lead a healthy and productive life. If current trends continue, the number of poor people in the world will stop falling—and could even start to rise.

To promote the release of the report, Bill and Melinda Gates sat down to talk with National Geographic Magazine’s editor in chief, Susan Goldberg. During the interview, Goldberg asked what problem they would fix if they had a magic wand to wave.

She also said that contraceptives give people the chance to lift their families out of poverty. “Because if they can space the births of those children, they can then feed them, they can educate them, the woman can work and contribute her income to the family,” she continued. “It changes everything in the family dynamic, and it changes the community, and ultimately you get these country-level effects where it’s good for everybody.”

Over 50% of children in Africa suffer from malnutrition which affects their mental and physical development.

“I’m super excited that by the end of the decade we expect to have cheap interventions so those kids will fully develop,” Bill Gates said. “That means all the investments you make in their education, wanting to benefit from their productivity, will work far better. So if there was just one thing, it’s the intervention to stop malnutrition.”

Photo by Brinson + Banks @brinsonbanks | I’m Melinda Gates @melindafrenchgates, and I’ll be guest-curating @natgeo’s Instagram feed today. This week, @thisisbillgates and I released the #Goalkeepers18 report, which highlights the progress the world has made against poverty and disease and explores what we can do to ensure that progress continues. The two of us recently spoke with @susanbgoldberg, Editor in Chief of National Geographic, at our foundation’s Seattle headquarters. You can learn more at natgeo.com/gates.

Photo by @mmuheisen | 21-month-old Afghan refugee Anna Rahmoni sleeping under a mosquito net outside her family's tent in a camp north of Athens. Nobody leaves their home unless they’re forced to leave their home. - “Since 1990, the world has cut child mortality in half—a truly stunning feat. But behind that statistic are stories like Anna’s. She reminds us that our work is far from done. Every child, everywhere, deserves to live a life that is healthy, safe, and full of potential.” – @melindafrenchgates

Photo by @stephsinclairpix | Sisters Yagana, 21, YaKaka 19 and Falimata, 14, were all abducted and held captive by Boko Haram until they escaped. To attract male recruits and motivate combatants, Boko Haram awards these kidnapped “wives” to fighters. As these girls reach puberty, forced marriages often turn them into unwilling mothers, their children pegged as the next generation of fighters. - “Poverty is not inevitable. But violence, gender inequality, and other deep-seated problems make it difficult to fight against. Today, most of the world’s population growth is happening in the world’s poorest places—the very places where it is hardest to live a healthy, productive life.” – @melindafrenchgates

Photo by @waynelawrence | Iman Saleh, whose parents are from Yemen, is a journalism student at Wayne State University in Detroit. This image was part of National Geographic’s May 2018 issue on Diversity in America, covering racial, ethnic, and religious groups and examining their changing roles in 21st-century life. - “There’s no doubt that today’s young people face enormous challenges. Still, the data tells us that they’re healthier, better educated, and have greater potential than any group of young people that’s come before—and I’m willing to bet that the generation that will transform the world into a better, more equal place has already been born. ” – @melindafrenchgates #Goalkeepers18

Photo by @lynseyaddario | Kahindo, 20, sits in her home with her two children born out of rape in North Kivu Province, eastern Congo in April 2008. - “Every child born into a cycle of poverty and violence has the potential to break that cycle. But that will only happen if the world chooses to invest in their lives and their wellbeing. ” – @melindafrenchgates

Photo by @renaeffendiphoto | A young mother and a survivor of the Lord Resistance Army rebels violence attend a literacy class organized by Sister Angelique in Dungu, Democratic Republic of Congo. There is a large gap in literacy rates between men (86%) and women (67%). Herself a refugee, Sister Angelique Namaika helped transform lives of move than 2000 women and girls who fled the LRA violence by creating educational and economic opportunities for them. “Over the past two decades, I’ve met countless young people who are fighting with everything they have for the chance to learn. They know that the path out of poverty begins in the classroom. It’s critical that the world keeps investing in access to contraceptives and health care services that help them remain in school. ” – @melindafrenchgates #Goalkeepers18

Photo by @tasneemalsultan | “I’ve been working as a housemaid for the same family, for the last thirteen years. I choose to not take a holiday to Indonesia, so I’ve not visited my family, since I arrived. My salary was $160, but now I earn $400 a month. With this money, I’ve built a farm, and a big villa for my family. I retire next month. It’s funny, because I think I’m more wealthy than the old couple I look after in Saudi” - Suty, who is now 68 years old. - “Human capital investments must focus on women and girls. Here’s why: because a history of discrimination has created greater barriers to their success. And, because the evidence shows that when women have access to opportunity and resources, the impact ripples through their families and communities.” – @melindafrenchgates #Goalkeepers18

Photo by @michaelchristopherbrown | A 16-year old girl from a village near the mining town of Numbi, Democratic Republic of Congo was raped by three Hutu militia fighters, one of whom impregnated her and gave her HIV. She did not know she had HIV at the time this image were made. She was at a HEAL AFRICA clinic in Goma with her child and her mother, who is covering her face. Control over the mines, and the income they provide, has fueled conflicts in the area for decades, including violence against women. - “In Sub-Saharan Africa, the fight against HIV/AIDS is far from finished. Among the tragedies of HIV/AIDS is that it strikes in the prime of life, when young people should be finishing school, starting businesses, raising families, and building strong communities. We need to recommit to reaching more young people with effective treatment and prevention measures. ” – @melindafrenchgates