How This Rich Kid Plans to End Income Inequality for Everyone

“There is no wealth without genocide and slavery.” #globalgoals 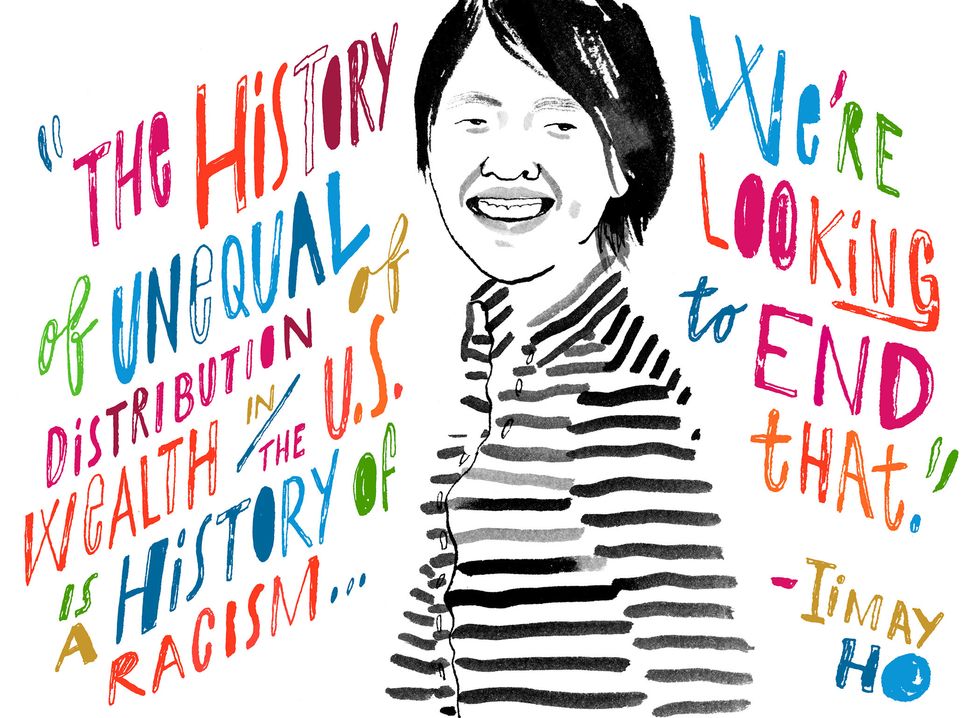 This fall, the United Nations is preparing to launch its 17 Sustainable Development Goals—an extraordinary action plan to solve the world’s biggest problems by 2030. Over the coming months, we’ll be connecting with The Local Globalists: 17 nonprofit founders, entrepreneurs, and social innovators who are working every day, wherever they are, to turn one of the U.N.’s #globalgoals into reality.

Goal 1: End poverty in all its forms everywhere.

Twenty-nine year old Iimay Ho—acting executive director of N.Y.C.-based Resource Generation (RG), which works with 18-35 year old Americans with wealth and class privilege to equitably redistribute land, wealth, and power—is comfortable disclosing that she has over $100,000 in net assets and makes $66,000 a year. (That puts her in the top 10 percent of Millennials based on salary alone, and the top 1 percent based on net worth). “In the U.S. there’s such fuzziness about class identity and what class means, even though it’s a defining part of our lives,” she says. “Talking about wealth and class privilege takes practice, but it’s very important, it’s one of the first things we do when people join Resource Generation—we ask people to tell their money stories.”

Being up front about money forces those with wealth to intimately connect with their financial realities in a way that only those without privilege have to do every single day. It also, says Ho, “pushes back against the shame and guilt a lot of young people with wealth have.”

Ho didn’t always consider herself to be privileged. She grew up mostly middle-class until her mother became successful in her business as an insurance agent. Both her parents were raised in Taiwan, and came to the United States legally as graduate students—which Ho is quick to point out was already a position of privilege. “U.S. immigration privileges people like my parents who come from East Asia for education,” she says. “Their families had enough money to send them to America and to school. It’s way harder to legally come if you’re poor.”

By the time Ho was in high school, her mother was making $100,000 a year. Ho remembers, “I became the kid who always had the cool thing first. I was one of the first to get a cell phone or an iPod, and I didn’t have to work in high school.” This was her first understanding of class. Currently, Ho’s mother maintains 6,000 clients and her net income is about $250,000 a year. Because of her mother’s financial success, Ho was able to attend college debt-free—her parents paid her tuition, living expenses, and bought her a car. She also knows that she stands to inherit a sizable sum.

But Ho is careful not to reinforce the bootstrap narrative. She says, “My mother is incredibly good at what she does, and works really hard, but many institutional factors helped her make it. She had a lot of help from her family, my father, affirmative action, and if any of those things hadn’t happened that way we’d probably have been comfortable but not wealthy.” Ho remembers photographs of her mother’s colleagues. “There’s all these white men and then there’s my mom, but my mom’s still an Asian woman and not a black person. Although my mom experienced racism and discrimination, the model minority myth bolsters East Asians at the expense of demonizing blacks.”

A large part of Resource Generation’s mission is to elucidate and correct the connection between race and class. “We can’t talk about wealth in this country without talking about racism. There is no wealth without genocide and slavery,” Ho says.

As a queer Asian American woman, Ho knows what marginalization feels like, but she argues that she has it much easier than people with skin darker than hers. “There’s a higher proportion of young people of color with wealth who are Asian or light-skinned or multiracial with white heritage and that’s not an accident,” she says. “Because of the legacy of slavery and racism it’s almost impossible to have intergenerational transfer of wealth in black communities.” RG recently ran a campaign, It Starts Today that raised $1.4 million to Support Black-Led Organizing for Black Liberation. According to Ho and RG’s website, “The history of the unequal distribution of wealth in the U.S. is a history of racism—it is impossible to separate the two…. This is just the beginning…of our work to support the end of white supremacy, anti-Black racism, and state-sanctioned violence.”

The key difference between RG and other charity organizations is that RG transcends traditional donor organizing in which the main outcome of bringing people together is giving away money. Ho explains, “Although moving money is a key part of what we do, we are unique because we are organizing young people with wealth to participate fully in social justice movements and to bring all of their resources and skills—not just writing checks. This community organizing model was developed by and for marginalized communities to build their power, and it's unique that we are adapting this model to organize people with privilege, especially wealth and class privilege, which is rarely addressed in activist communities and in general.”

What this translates to in the everyday is RG’s leaders, concentrated in 15 national chapters, partner with local social justice foundations on such things as giving projects, coalitions to pass budgets that raise taxes on the wealthy to support the social safety net, and advocating for climate justice as "out" young people with wealth.

Ho estimates that about 70 percent of those involved in RG identify as female, and a disproportionate number of them are queer. She hypothesizes that, “For queer white folks, queerness is one of the main ways they experience oppression and marginalization, and through that they are politicized and become involved.” It could also be true that for white women, sexism is a politicizing factor. However, most wealthy people in America are white straight men. “We have specific organizing for men,” Ho explains, “and what it means for them to be feminist and men in this work.” Bringing straight white men aboard is something RG discusses—it would grant them access to a lot of money and much of the top 1 percent people of wealth in this country—but expanding into that base is not their top priority. “It would take a different style of organizing and we’d have to put ourselves in places we aren’t currently going to,” Ho says.

“We changed our mission and vision in 2013 and are still figuring out who we need to be. Ultimately I’d like to have all Millennials in the 1 percent know about us and be involved in our work. I think there are a lot of people who would be interested and want to do good with their money and time,” Ho says. “But for me, now, it’s great to be a part of a workplace where queer culture and relationships are centralized and part of the norm.”

Ho will know RG has been successful if, within fifteen years, the United States has “universal housing, dignified labor, reparations, universal healthcare.” She says, “We can no longer have a system in which anyone’s economic security rests on the exploitation of other people. That’s how it is now and we’re looking to end that. We’re in the process of identifying a national campaign vision and hope to make concrete wins in partnership with others. We want to clarify the role we have as young people with wealth and class privilege in these fights.”

Ho agrees to speak with the press on one condition. Though her organization is making strides to correct hundreds of years of deep inequalities, she wants me to emphasize that, “A ton of organizations led by poor folks are doing amazing work, and I don’t want focus on us to detract from that,” she says. Ho continues, “Resource Generation often gets media attention because we’re rich kids, but it’s an important value of ours to center on the experiences of those most directly impacted.” She declines plugging some of those organizations here, because RG doesn’t want to act as gatekeeper of who gets attention and who doesn’t. This type of thoughtful, deliberate, sensitivity is emblematic of the organization’s attitudes towards wealth, class, racism, prejudice, and privilege.