Biologist repopulated rare butterfly species in his backyard all by himself

Proof that one man can make a difference after all. 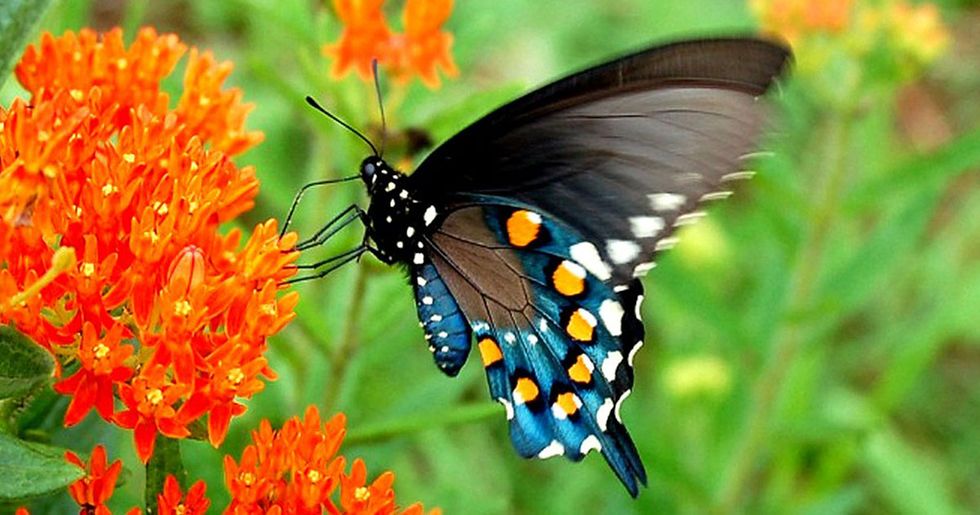 If you think your conservation efforts aren’t going to do anything because you’re “just one person,” think again. One man single-handedly brought back an entire population of butterflies.

The California pipevine swallowtail butterfly (or Battus philenor hirsuta), native to San Francisco, began to disappear in the 20thcentury when the city was developing. Eventually it became rare to see their bright blue wings flapping around the city. Now, there’re making a comeback thanks to Tim Wong, an aquatic biologist at the California Academy of Sciences.

Wong has had a life-long fascination with butterflies. "I first was inspired to raise butterflies when I was in elementary school," Wong told Vox. "We raised painted lady butterflies in the classroom, and I was amazed at the complete metamorphosis from caterpillar to adult." But it was the pipevine swallowtail that particularly piqued his interest, so Wong became committed to reviving the rare butterfly.

It wasn’t an easy mission. The butterflies only feed on one type of plant, the California pipevine, which is part of the reason why they’re becoming scarce. In San Francisco, the California pipevine is just as hard to find as the butterfly they share a name with. Wong had to search around. "Finally, I was able to find this plant in the San Francisco Botanical Garden [in Golden Gate Park]," Wong said. "And they allowed me to take a few clippings of the plant."

Wong constructed a greenhouse in his backyard then populated it with 20 caterpillars he acquired from private residences. "[I built] a large screen enclosure to protect the butterflies and to allow them to mate under outdoor environmental conditions — natural sun, airflow, temp fluctuations," Wong explained. "The specialized enclosure protects the butterflies from some predators, increases mating opportunities, and serves as a study environment to better understand the criteria female butterflies are looking for in their ideal host plant."

Thanks to Wong’s conservation efforts, the butterflies are now thriving. “Each year since 2012, we’ve seen more butterflies surviving in the garden, flying around, laying eggs, successfully pupating, and emerge the following year,” Wong said. “That’s a good sign that our efforts are working!” The butterflies normally emerge from their chrysalis in the spring, and are seen flapping their bright blue wings between February to October. They normally have a lifespan of two to five weeks.


The biologist releases his cultivated caterpillars to the California Native exhibit in the San Francisco Botanical Garden and documents their growth on Instagram, earning him the name, “Butterfly Whisperer.” The bright blue hue of the butterflies makes them Insta-worthy for sure.

Wong insists conservation isn’t just for people who have the word “biologist” in their job title. It’s for everyone. "Improving habitat for native fauna is something anyone can do," Wong said. "Conservation and stewardship can start in your very own backyard."Conservation is the ultimate DIY project.