Scientists Stunned By One Man's Successful Fight To Save An Island

Killer plants are invading. His response: We don’t want no shrubs. 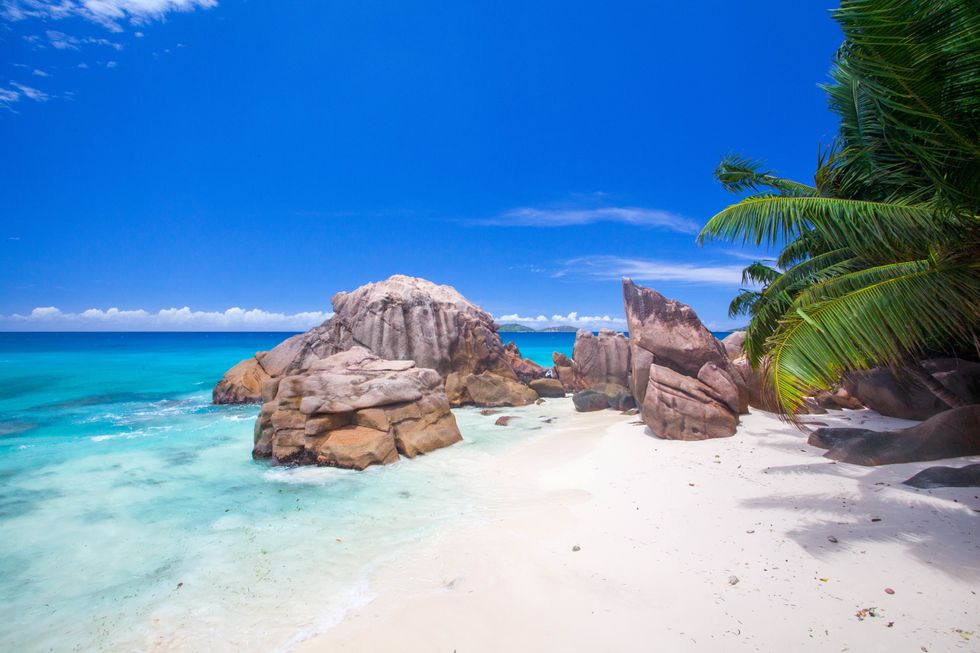 Felicité island in the Seychelles archipelago near Madagascar. Photo by Maxwell Williams.

Ecologists like Steve Hill are proving that passion, combined with creative solutions, can be a serious threat to our planet's most destructive forces.

All around the world, there’s unfortunate news about the environment: reefs are bleaching, glaciers are cleaving, and superstorms are brewing. In the United States, Interior Secretary Ryan Zinke doesn’t believe in climate change, which has derailed ongoing conservation efforts. It looks bad. But on the tiny Félicité island in the archipelago of the Seychelles, there’s a reason to be optimistic. The island is undergoing an environmental rebirth. This recalibration offers us an important lesson: If we work towards the restoration of the environment, and tend to our habitats, it might be possible to undo our damage.

[quote position="full" is_quote="true"]Whatever newspaper you will open, you’ll hear the doom and gloom, but if you can find the few bright spots in the world, what a difference that will make.[/quote]

The view is gorgeous up here, standing a few hundred feet up on the granite boulders of Félicité. Looking out, you can see giant fruit bats lazily swooping in from the Sister Islands of Petite Soeur and Grande Soeur. A little closer is Île Cocos, known for its crystalline snorkeling, where hours before I swam with sharks, barracudas, and parrotfish. Whale sharks and the critically endangered Hawksbill sea turtles are known to dally here, too.

But a battle is raging in this tiny nation that has bore the brunt of colonialism for centuries. The cultural markings of the brutal French (and later British) rule are deeply present — from the Creole spoken by the Seychellois, to the French-influenced cuisine, to the Moutya danced at parties on the beaches. But there’s another vestige of colonialism that has completely decimated Felicité at the ecological level: the coco plum.

“Since the French settled here circa 1770, [colonists] left a very heavy footprint,” says Steve Hill, the official ecologist of the private island’s Six Senses Zil Pasyon resort, pointing to a thicket of ground cover that has almost completely destroyed the fragile ecosystem of Félicité, one of 115 islands in the Seychelles. “Unfortunately, in an island ecosystem, this is particularly damaging, because these are closed ecosystems, so even the slightest intervention from outside causes maximum disruption and unforeseen circumstances, and a prime example of that, if you just look around us here, we have this horrible shrubby stuff called coco plum, or Chrysobalanus icaco.”

South African permaculturalist Steve Hill is working to restore the natural environment on the island. Photo by Maxwell Williams.

No, We Don’t Want No Shrubs

Brought in as a cash-crop by French colonialists, the fertile coco plum’s thick brush wiped out nearly every endemic species of flora known on the island — including the exceedingly rare Wright’s gardenia trees — taking along with it many of the avian species that relied on those plants. Add to that the fact that prior to colonization, there was a large population of tortoises on Félicité, and the island now is a shell of its formerly rich, biologically diverse natural habitat.

“In the sailing ship days, tortoises were a source of fresh meat,” says Hill. “All of these little granitic islands had their own populations. They were slaughtered one at a time, because tortoises can stay alive for months without food or water. So the ships would land, pick up 50, or 100, turn them upside down on their shells on the deck, and sail off. So while you were sailing, you had fresh meat. It’s a horrible story, but unfortunately, that’s the way it was. Tortoises will, at some point, be reintroduced onto this island in a controlled way.”

The South African permaculturalist Hill, with his sun-brushed face, is dressed in a safari gear, and more often than not, offers the scientific name of things as he’s describing them — all of which adds up to give him a sort of ineffable resemblance to Sam Neill in Jurassic Park, minus the churlishness. He even claims his ancestors hosted Teddy Roosevelt on a safari. He is in the midst of explaining how the dark gray granite rocks flowing up the sides of the island often make people think it’s volcanic rock, but we’re actually standing on a splinter flung off the prehistoric supercontinent of Gondwana, when something catches his eye.

“How lucky are we?” exclaims Hill. “Isn’t that incredible? That’s a wild vanilla orchid in bloom. Endemic to Seychelles, found nowhere else in the world.”

Hill’s enthusiasm is infectious, even though it’s morbidly hot, and our small group — which included a local investor, her guest, and myself — is trudging up the makeshift hiking path, our shirts clinging to our backs with sweat. Hill’s giddiness at the sight of the vanilla orchid is a snapshot of a man in the midst of an ecological restoration project the likes of which the world has never seen.

It’s a long way to that ultimate goal. Hills describes the rehabilitation of the island as being 90% cleared on one-third of the island, and 0% done on the other two-thirds. That means he will rely on steady funding from outside sources to continue clearing all the coco plum, and reintroducing endemic plants.

The Seychelles has long been an idealist in environmentalism. Their president France-Albert René, known locally as “the Boss,” devoted large monetary resources to the country’s environment during his tenure from 1977 to 2004, which has set a precedent for his successors. Since Félicité is a private island — Six Senses Zil Pasyon is an ultra-luxury resort with cushy villas, best accessed by helicopter — it isn’t getting much of that institutional support. But that doesn’t make it any less of an important environmental study.

Case in point, deeper into the forest, where Hill has stemmed the coco plum’s invasion under the shaded cover of tall palms and hardy Takamaka trees, Hill points out Félicité’s other natural wonder, a grove of six coco de mer trees (though the coco de mer is not actually endemic to Félicité, it is to nearby Praslin Island, and this grove is several hundred years old). These massive palms are bearers of the largest seed in the plant kingdom. And due to the males impressive inflorescence, and the booty-like appearance of the female seed, the subject of much folklore.

“A huge number of local legends have grown up about the male and female trees — stormy nights is when the mating takes place,” he says with a laugh.

Though Hill is somewhat unsung, there’s a sort of unbelievable quality to his successes. He drew up the blueprint for the restoration of another private island in the Seychelles called Frégate. His Frégate project helped bring back the Seychelles white-eye, a tiny passerine bird with a white ring around its eye, from the brink of extinction. Thought to be completely gone, it’s now listed as merely “vulnerable.” Similarly, the Magpie-robin, once one of the rarest birds in the world — there were less than 25 of them left in 1970 — is now thriving on Frégate.

“[With the restoration of the habitat on Frégate] we saved the species from certain extinction,” he says. “Today, they are spread around five different islands on the Seychelles. That’s what happens when you click on the right thing.”

Add to those successes a booming tortoise population — he says there are now over 4,000 tortoises on Frégate — and the island has officially achieved an ecological resurgence that has stunned Hill’s fellow scientists. But Frégate had the boon of a billionaire owner, says Hill, and though he’s getting support now, he is always hunting for more if he hopes to return five native birds to the island, along with planting thousands of endemic timber trees — including the Takamaka — and restoring of a tortoise population as was done on Frégate.

It’s an uphill battle, says Hill, who has been wrestling with Félicité for nearly 11 years now. Once the island has been cleared of coco plums, consistent clearing has to continue for two or three years before it’s certain that the plants has been eradicated. “Until the seed bank is exhausted, they keep coming back,” he says with a sigh, implying the need for a team of ecologists working with him to make sure the island is properly reconditioned. “This is the foolishness of man — bringing an alien species into an enclosed environment.”

In humanity’s most recent epoch, stretching from colonization, to industrialization, humans have destroyed most of what they have touched in this world. But with care and cunning, it’s possible to reverse much of the damage that we’ve wrought. What it takes is people like Hill. His plan for global change starts with awareness of his local successes. By sharing his work with the world, and he hopes others will inspired to enact ecological change in their own neighborhoods and environments. And together, these these small victories can add up to big win for a sustainable future.

“My great passion is collecting all the rare things and putting them back where they’re supposed to be,” he says. “And at the end of the day, you have an ecological jewel, and what could be more marketable in today’s world than that? There’s such a lesson to be learned about what you can do here, and the more that that message can be spread, the happier I’ll be. Whatever newspaper you will open, you’ll hear the doom and gloom, but if you can find the few bright spots in the world, what a difference that will make.”