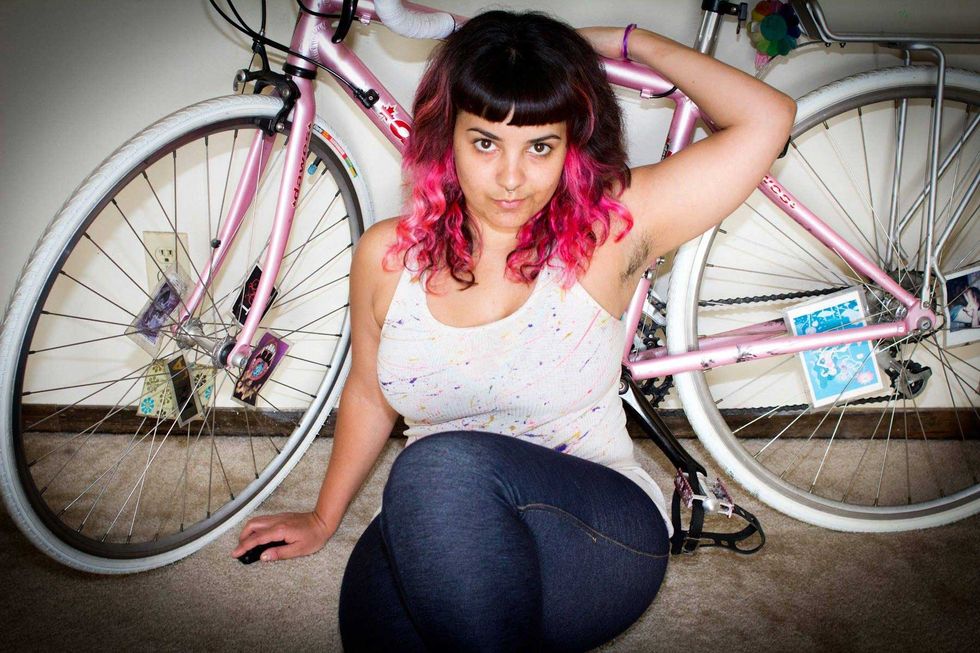 Pink-haired, Latina queer feminist Liz Acosta is hustling through San Francisco today on her pink bike, Lola Divine. She calls her city an alternate universe, where white men in tech are wielding power and solving problems that not everyone in the city has, which she can’t accept as advancement. To her, advancement would be making tech more accessible to differently abled people—safely, conveniently, and on time, with respect. So how does she plan on being a part of this digital dynamic?

It’s only been since 2014 that computer science has even been considered a required subject for U.S. schoolchildren. Acosta never learned programming at a young age and like most millennials age 24 and up, 5.4 percent of which are currently unemployed, she hasn’t found the job security that a computer science degree could potentially offer her. Eight years after graduating from University of Southern California with a B.A. in film and art, she finally succeeded at being trusted as the social media voice for a startup brand. But when that company changed owners and their employee base, she realized she needed to close her tech skills gap so that she could be more relevant and adaptable in the workforce.

In the winter of 2015, she enrolled in an intense all-female ten-week software engineering bootcamp at Hackbright Academy, and now, after building her coding skills with a community of women from both science and engineering backgrounds, she feels more prepared to look for work as a junior engineer. Although Acosta had little coding experience going into the program, she found her skills in film to be transferrable. “Programming is a lot of things. It’s writing code, doing algorithms, and figuring out math and patterns, but it’s also project-oriented. So it’s about team-building, problem-solving, and communication skills. And in film school, I learned how to work with all types of people twelve hours a day and see a project through,” she says. Her grit, variety of strengths and passions, and collaborative nature give Acosta that extra hireability and are some of the key traits Staffing Leader at Google, Mary Hamershock, looks for in potential hires, in addition to elegant coding skills.

While other millennials attempt to improve their chances at succeeding in this ever-changing, fast-paced, tech-fueled workforce, alternative schooling programs like General Assembly, Codeacademy, Code School, and Code.org are popping up to offer that unaccredited yet affordable coding education many are looking for. In a sense, these schools, despite their varying levels of effectiveness, are democratizing the tech world. Codeacademy not only aims to teach people how to code for free online, but also partners with companies and countries to create curricula. Britain is already the first country in the world to mandate computer programming in primary and secondary schools, using Codeacademy’s beta curriculum that advances students from debugging simple programs, to designing and writing programs with specific goals, to understanding algorithms and computational thinking. But for the regular individual who hasn’t been to school in a while, what Codeacademy , Code School, and Dash General Assembly lack is a more human connection—in-person encouragement and teamwork that sparks questions, boosts reasoning power, decision-making confidence, and student accountability. Things that only an “IRL” school with tuition, like General Assembly or Hackbright, could offer.

Although Hackbright offers education that is not necessarily comparable to a computer science degree, Acosta credits the school for giving her the confidence to learn quickly: “Hackbright was instrumental in showing me that even when faced with something brand-new that I knew nothing about, I could still figure it out, and that’s a good place to start.” With co-horts who’ve built apps like Senti to help support teams prioritize ticket queues based on sentiments, LGBT MD to help the community access well-trained medical providers, or Ocean Rider’s Journal, which helps surfers collect wind and swell data based on location, Acosta leveraged her social media background to build trendVS, which uses a Twitter API to “compare Twitter trends locally vs. nationally, enabling brands to access, identify, and capitalize on social media moments that can help target and expand their reach and engagement.”

Says Acosta, “Hackbright gave me the structure to get started and now the rest is up to me.” To continue her learning after the program, she’s rebuilding her website from scratch, practicing D3 to build a site that will visualize “how awesome people are when they’re feeling sad,” and she’s hosting hack sessions to practice and solve programming problems with her cohorts.

Liz Acosta presents her final project. Photo via Give Photography, courtesy of Hackbright.

Though many believe there’s currently a STEM crisis in America, many of the world’s problems are managing to be solved through tech: Healthcare.gov; apps connecting people to resources like Homeless REACH; sites that make life more efficient, like Trip Advisor. So perhaps what STEM fields ought to focus on is the diversity of its talent pool, rather than the size of it. A mere 26 percent of workers in the computing workforce are women—and only 16 perecent Latino; 12 percent black. But Acosta believes that people are starting to see a shift from the mystique of the loner white dude programmer to a more team-oriented space, featuring people who weren’t given the privilege to be exposed to programming early on.

“If tech is all about disruption, hiring me—a queer person of color—is part of that mission to disrupt. I just need the structure and mentorship and support to do that,” Acosta says. So with her co-horts, she’s specifically seeking work at companies that are willing to #changetheratio. “Tech is doing a disservice by not paying attention to real problems. Tech will honor tech in its purest form if it acknowledges people with the biggest problems, not people with the fewest problems,” Acosta says.

In her most recent Facebook photo, Acosta stands among a group of 24 women in red Hackbright hoodies celebrating their Winter 2015 graduation with a sign in chalk that says: “Get the coin.” “That’s our motto,” Acosta says. There’s a collective goal among her cohorts to increase not only the amount of diverse women in tech, but also their salaries. And with the pay gap between men and women still alive and well—not to mention only 7 percent of venture capital going to female-owned businesses—they’re hoping to move the needle.

“When people are still struggling on six figures in San Francisco, which is barely middle class here, I’m wondering, as many diverse ladies do, if I’m even allowed to have that pay. And I’m wondering how can we redistribute that so that people like me feel like they can pursue happiness and take care of themselves. And frankly, I can do more for the world when I’m taken care of, when my needs are met and I don’t have to worry about rent and loans. That’s when I can go out in my community and contribute,” she says.

Twenty companies came to interview Hackbright graduates during their last week of classes. Photo via Give Photography, courtesy of Hackbright.

As Acosta continues her job search, she’s approaching tech companies in bold ways, sending sincere, authentic letters to startups she believes in, talking about her story, what’s she’s done, what she wants to do, and what she wants to do specifically with them. She also makes a point to be honest about her experience and need to get her feet off the ground. And, she’s getting good responses. While there have been ups and downs in her job search, there is no doubt that Hackbright’s alternative all-female bootcamp-style schooling has empowered her to not only have a job that can cover basic needs, but also pursue a career that will allow her to contribute to a larger community, and perhaps eventually change how tech can serve all races, ethnicities, genders, sexual orientations, and disabilities.