Confessions of an Ex-Obama Superfan

A new poll shows U.S. President Obama losing support among the demographics that helped elect him. 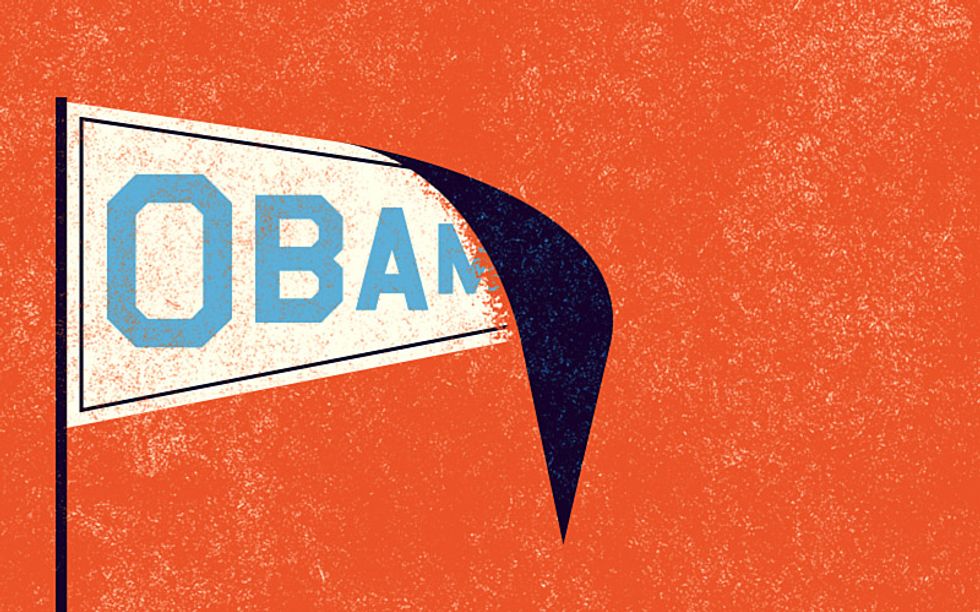 It was the summer of 2004, and I snuggled up to my then-fiancé to watch the Democratic National Convention’s keynote address. I was in the middle of graduate school in Chicago and was already familiar with the candidate running for Illinois’ open U.S. senate seat.

The charming professor hit his rhythm with words that still grip me:

“If there's a child on the Southside of Chicago who can't read, that matters to me, even if it's not my child.”

Tears unexpectedly welled in my eyes. I tutored kids on the Southside. I loved them.

“If there's a senior citizen somewhere who can't pay for their prescription and [is] having to choose between medicine and the rent, that makes my life poorer, even if it's not my grandparent.”

He was talking about my parents, their choices. Salt water poured down my cheeks.

“If there's an Arab-American family being rounded up without benefit of an attorney or due process, that threatens my civil liberties.”

I was angry, so angry, so bitterly confused by the seeming wave of injustices that crashed down in the wake of September 11. I’d protested, petitioned, bought the “village in Texas is missing its idiot” stickers. I didn’t know what else to do.

“It is that fundamental belief…I am my brother's keeper, I am my sisters' keeper—that makes this country work.”

By the time he got to the bit about red states and blue states being more alike than pundits would have us believe, Barack Obama had locked up my vote for senator and, later, my presidential vote.

Supporters of Democratic presidential nominee Senator Barack Obama (D-IL) cheer as the rain pours down during a campaign rally at the University of Mary Washington in Fredericksburg, Virginia, September 27, 2008. REUTERS/Jason Reed

When he won in 2008, I wept again. It was about him, but it was about the rest of us—together we’d found someone who could undo what had gone so wrong. For many like me, President Obama’s election was a milestone that marked a new America; an America that might be post-racial (almost), post-Guantanamo, post-war, post-recession, post-Sarah Palin. During the campaign, he was famously called clean, and it’s as though many of us expected him to take office with a broom in hand and sweep away all memory of the past decade. He could rebuild America.

I lived for years with a six-foot tall cardboard cut-out of Obama in my house. I framed my “Ohio for Obama” window sign. (It’s where I lived after grad school, where I canvassed for him, too.)

But I can no longer bring myself to hang it on the wall.

When Obama was first elected, I found myself deeply troubled—not by the election, no, I was overjoyed about that. I was worried the presidency would be the good man’s undoing.

There’s a story we all grow up with: leadership means getting your hands dirty. There will come a time when even the most stringently idealistic leader will be faced with the true dilemma of statesmanship: you keep your own soul pure, no matter what that means for your people, or dirty your hands and do what you must for the public good.

Those of us who loved Obama during the campaign, loved him because (among other things) he was so good. Sure, he cut his chops in Chi-town, but he wasn’t a real wheeler-dealer Chicago politician, was he? No, I thought, he was a constitutional law professor who got there by bootstrap-hoisting and wiz-kidding his way through Harvard.

But over the past year or two, I, like an increasing percentage of formerly enthusiastic supporters, have had the sinking feeling that the Obama I loved has been lost, or worse, never really existed.

Is he still his brothers’ and sisters’ keeper when he had deported nearly 2 million people by this spring? When Guantanamo remains, with force feedings of prisoners and more than a hundred imprisoned who still lack any formal charges? While drone strikes in Pakistan have killed thousands?

Years ago, Obama ripped my guts out a little talking about that proverbial kid in Chicago who couldn’t read. Yet this President recently allowed the fast-track deportation of Central American refugees—children, without legal representation, warehoused in cells until they can be sent away, back into the hands of murderers.

Yes, Republican obstructionism is to blame for quite a bit. Yes, Obama was handed two failed wars, trillions in debt and a Recession. Yes, there has been a strengthening push to recognize LGBT citizens and their human rights (but why did that take so long?).

For years Obama’s composure appeared to get in the way of necessary fights. He relented on the Bush tax cuts for the wealthy. He waltzed around fiscal cliffs, perhaps not recognizing how willing others were to fall off. If passivity is a crime, add the nearly 200,000 dead in Syria to the list.

And now, after first having no strategy (or none decently articulated), we’re fighting ISIS in “a comprehensive and sustained counter-terrorism strategy.” Obama’s legacy, it seems, will largely be one of war.

I’m appalled by all this, and not in the way that I was by President Bush’s failings—in part, because I thought so little of Bush and found his cronies so uniquely abhorrent.

No, watching Obama get his hands dirty while failing to muscle over his domestic rivals has left me with a pitiful sense of loss. It’s been a betrayal of both a moral and a civic trust.

Don’t get me wrong, I’ll vote. I’ll always vote. (I’m a progressive woman, living in a red district, in Ohio. I know my vote is worth more than my weight in gold.) But I can’t conceive that I’ll ever have another Obama moment. Maybe that will make me a more thoughtful voter, certainly, a more jaded one.

It’s just that I thought Obama would be good, so good. Great, even. I thought he could govern, while himself remaining just. He came to embody the American Dream for me, and now, seeing his failings, that dream feels like folly.