This couple set the perfect ‘trap’ to help a stranger in need.

They wanted to be sure the person really needed the help. 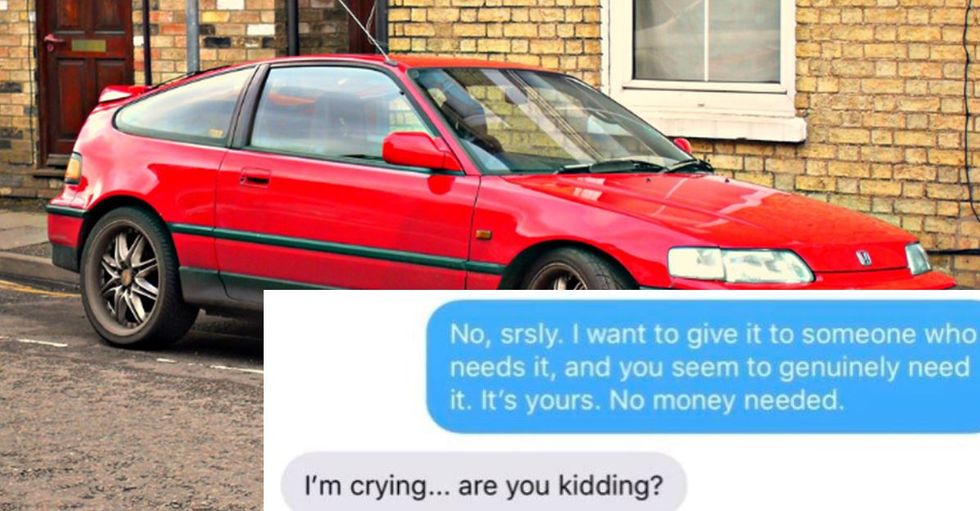 In a capitalist society most relationships between strangers are transactional.

I scratch your back, you scratch mine.

Everybody’s got a price.

Ass, cash or grass nobody rides for free.

It’s not necessarily a bad thing, it’s just how our material needs are met.

One story that recently went viral on Reddit, under the r/HumanbeingBros subforum, shows the power of being generous for generosity’s sake.

However, one reason it’s so powerful is because this type of generosity between strangers so unfortunately rare.

Reddit user u/JeffTrav (we’ll call him Jeff) had just purchased a new car with his wife and decided they should give away their old one to someone who really needed it.

“At first, she was going to put it on [Craig’s List] for free, but I said that wasn’t a great idea, because you’d get scrappers or just anyone wanting a free car who didn’t really need it,” Jeff wrote. “We decided to list it as $1200, a bit below its value, because anyone looking for a car in that price range probably just really needs a car.”

The couple decided to give their car away because they had been in the position before and knew what it was like. “We’ve been in that boat not that long ago, and figure we can help someone who needs it more than we need $1200,” he continued.

Jeff’s wife received a text message from someone interested in the car and used a little texting trickery to make sure the car went to someone who really needed the help.

It’s clear from the post that the unnamed woman really needed the car. She was responsible for taking her and her mother to and from work as well as transporting her kids preschool and back. No easy task.

“Thanks for all the practical suggestions about transferring the title,” he wrote. “We are meeting her at the DMV to get it registered to her, and will put a sale price of $20, so sales tax will be minimal. Im not sure if she will let us pay for the registration or not.”

As if giving away the free car wasn’t enough, the couple had one more generous gesture beneath their collective sleeve.

“I think we will put the $500 in the glove box with a note. Then maybe my wife will text her in a day or so to make sure she found it.”