Georgia passed an abortion bill so extreme it may lead to a national ban.

This is not ok. 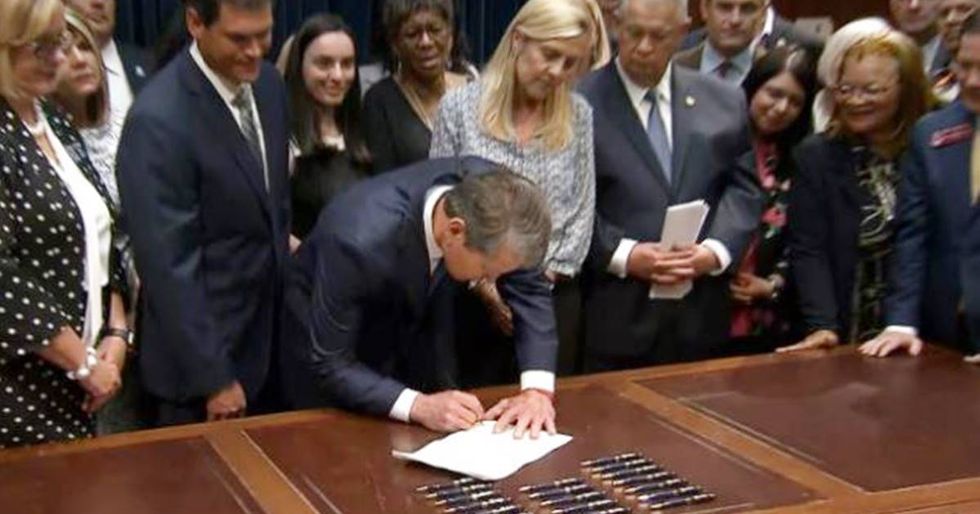 Georgia’s Republican Governor Brian Kemp signed a controversial bill into law on Tuesday outlawing most abortions once “a fetal heartbeat” is detected. The heartbeat, known by doctors as “embryonic cardiac activity,” occurs usually at about six weeks — a time before most women even know they are pregnant.

On January 1, the law will supersede the current law which allows women to have an abortion up to the 20th week of pregnancy. The law will allow for abortions after six weeks in the case of incest or rape.

“Georgia is a state that values life,” Kemp said before signing the Life Act. “We stand up for those who are unable to speak for themselves.” Kemp is pro-life but somehow still supports the death penalty and thinks people should own assault rifles.

The law could potentially have nationwide ramifications. It could launch a legal battle that would reach the Supreme Court and challenge the current Rowe V. Wade ruling that legalized abortion in 1973. Given the court’s current conservative majority, an overturn is possible.

“But our job is to do what is right, not what is easy,” Kemp said, recognizing a potential legal fight. “We will not back down. We will always continue to fight for life.”

The ACLU of Georgia told CNN the organization is preparing a court challenge to the bill.

“Today’s women can only thrive in a state that protects their most basic rights — the right to choose when and whether to start a family. Georgia can’t afford to go backward on women’s health and rights,” Andrea Young, the executive director of the ACLU of Georgia, said in a written statement. “We will act to block this assault on women’s health, rights and self-determination.”

This is a dark day in the state of Georgia. This is why the fight for abortion rights is not just about protecting… https://t.co/n6CxyBsgYd
— Bernie Sanders (@Bernie Sanders) 1557265418.0

The bill has also taken heat from doctors who challenge the notion that embryonic cardiac activity constitutes a heartbeat. Six-week-old embryos have yet to even form a heart.

“There’s nothing magical that happens when we can detect cardiac activity,” Dr. Jen Gunter, a prominent gynecologist, told The Guardian. “There’s no perception of pain, there’s no soul, there’s nothing that you can say, ‘Well, wow,’ this could medically make me think differently about abortion.”

When the abortion ban takes effect it could put the lives of countless women at risk by forcing them to endure illegal, underground procedures.

“The bill signed by Governor Kemp bans abortions before many women even know that they are pregnant. It is so extreme that it criminalizes doctors who provide lifesaving care, and it even allows the state to investigate women for having miscarriages,” Leana Wen, president of the Planned Parenthood Action Fund, said.