“If you’re going to legislate our bodies, then we have every right to propose legislation to regulate yours.” 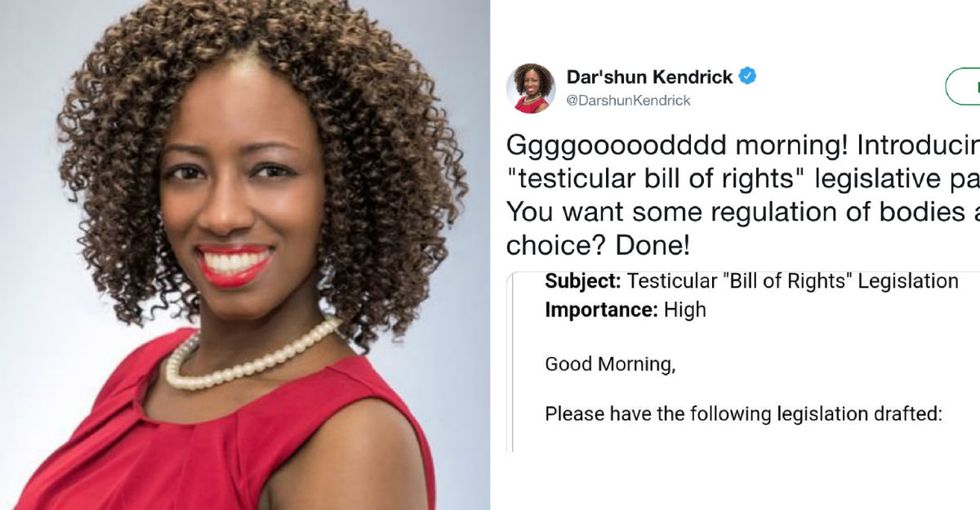 When it comes to political courage, no one should question the testicular fortitude of Georgia State Rep. Dar’shun Kendrick (D). When it comes to moral clarity, she’s got pro-life activists in Georgia by the balls.

Conservative lawmakers have passed what critics consider an extremely restrictive and possibly unconstitutional new law that makes getting an abortion incredibly difficult.

Georgia’s so-called “heartbeat bill” would allow doctors the right to refuse to perform an abortion if the pulse of a fetus can be detected, according to the Atlanta Journal-Constitution. The bill recently moved through a state Senate panel with a special intervention from Lt. Gov. Geoff Duncan (R). If it becomes law, the restrictions could effectively ban abortions for women who have been pregnant for as little as six weeks.

In response, Kendrick has proposed a countermeasure that would make vasectomies illegal, require men to get permission from their wives before obtaining a prescription for Viagra and make having sex without a condom an assault.

“If you’re going to legislate our bodies, then we have every right to propose legislation to regulate yours,” Kendrick said in an interview with Rolling Stone.

Though the first three aspects of Kendrick’s bill are obviously so over-the-top as to make a point about the state’s restrictive new abortion laws, Kendrick also included some common sense language in her bill that the state absolutely should pass, including restrictions on paternity tests and requiring fathers to pay child support.

“You want some regulation of bodies and choice? Done!” Kendrick tweeted.

Fellow State Sen. Valencia Seay (D) offered three amended versions of the proposed bill which would have drastically altered the Republican-sponsored legislation. The state Senate panel is split evenly between two Democrats and two Republicans, meaning a compromise on such controversial legislation would have been all but guaranteed. However, that’s when Lt. Gov Duncan intervened by appointing a third Republican to the committee, ensuring that all of Seay’s measures failed on a 3-2 vote.

“I have made an attempt to try to get a commonsense approach to women having a right to do what it is they do, and that is give birth,” she said. “Common sense comes from us who have delivered, who have given birth, and respect women making the choice for themselves.”

Instead, for now the highly unusual and restrictive bill continues on its path toward becoming law. Unless more lawmakers, particularly Republican men, follow the lead of brave leaders like Dar’shun Kendrick and reclaim some of the actual moral high ground they are supposedly working so hard to protect. Reducing the number of unwanted pregnancies doesn’t mean setting the U.S. Constitution on fire. It takes real work and thought, including supporting vital sex education programs, so that young women and men can make informed decisions about their lives. Maybe there should be a law about that.