But will it work? 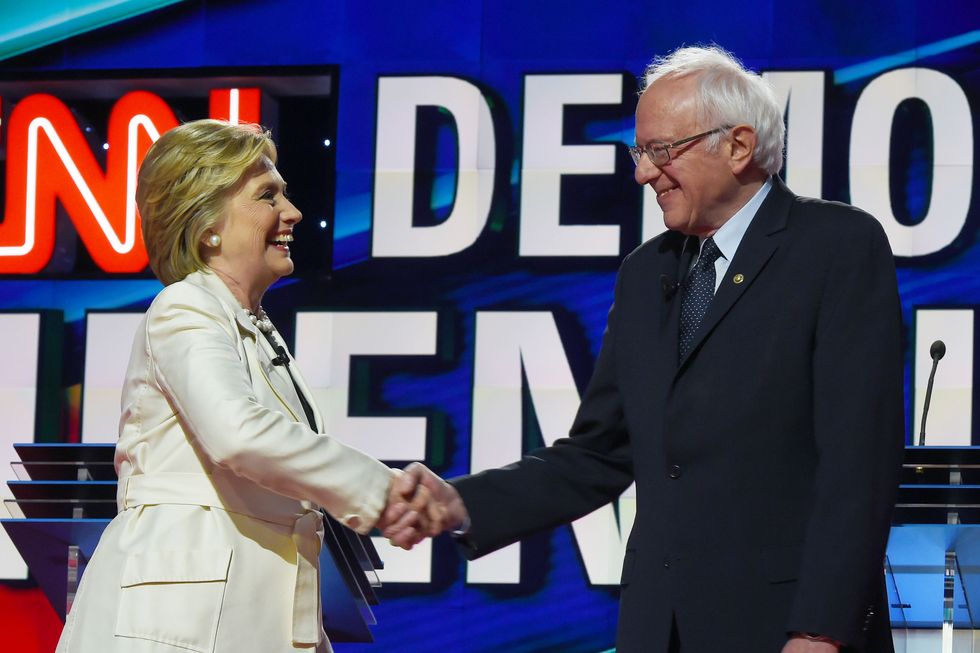 Bernie Sanders is, in almost all measurable ways, out of the race for the Democratic nomination for president. It is mathematically settled, and he told C-SPAN in an interview at the end of June “it doesn’t appear” he will be the nominee. Despite that he still hasn’t fully endorsed Hillary Clinton for the position.

The question of why he is waiting remains, and beyond the cynical possibility that he just can’t let the dream of the Sandernistas go, it seems his aim is to pull his party’s electoral platform closer to his views on the left. And even if it feels so annoying to watch him waffle, the strategy seems to be working.

Today, Clinton announced a “new” education reform plan that would eliminate college tuition for kids who come from a household that brings in less than $125,000 each year.

Hillary heard you: College costs are too high in America. It's time to fix it. https://t.co/HFcBczvyPH
— Hillary Clinton (@Hillary Clinton)1467820437.0

We say “new” because this was a central tenet of Sanders campaign—and one of the points that made him so popular among young voters. The main difference here is that Clinton has put a numerical ceiling on who would actually qualify for tuition forgiveness, while Sanders advocated for free education from all public institutions for every student. And even though Clinton and Sanders diverge on many issues, their suddenly similar plans for how to address the paralyzing student debt crisis in America both necessitate the same big follow up question: So, how will you be paying for that?

As campaign promises are a slippery terrain to traverse, we likely won’t see the knitty gritty numbers on how all the free tuition rains down until the hypothetical future in which Clinton becomes president. But what we do know, right now, is that the Democratic party is collectively moving to the left in a way that Sanders and his supporters should be thrilled about.

As The Washington Post recently reported, the latest version of the official Democratic platform reflects hard evidence of the Sanders Effect, “It will show a number of new provisions on Wall Street reform, infrastructure spending, and job creation that go beyond the victories that Sanders has already talked about. They suggest Sanders did far better out of this process thus far than has been previously thought. Many of these new provisions are things that Sanders has been fighting for for years.”

Specifically, the Democrats are committing to expanding Social Security, working toward a $15 per hour minimum wage, expanding and strengthening universal health care, preventing executives at financial institutions from serving on the board of regional Federal Reserve banks, mitigating the “revolving door” culture between Washington D.C. and Wall Street by banning so-called golden parachutes for private employees that move to government jobs, prohibiting Wall Street from hand selecting which credit rating agencies will evaluate them, and more.

Sanders isn’t making new friends in his party by withholding his official support from Clinton, which is, of course, what makes him a man of the people. He was even reportedly booed by House Democrats at a meeting Wednesday morning after telling them, “The goal isn't to win elections, the goal is to transform America,” when they just wanted to know why he wasn’t endorsing Clinton. After that meeting, he told CNN’s Wolf Blitzer a version of the same thing, saying, “What I'm trying to do and the reason I ran for president is to help transform this country. To deal with income and wealth, inequality a declining middle class, the fact that so many of the young people leaving school deeply in debt.”

So while Sanders sticks, possibly unreasonably, to his own party line, the greater Party’s goals are starting to sound a lot like them. He praised Clinton’s announcement about handling student debt, which includes a provision saying all student loan payments would be put on hold for three months to give loan holders an opportunity to refinance, but still has not given his complete and actual endorsement.

Only the magic crystal ball and Sanders himself know what it will take for him to put his seal of approval on his party’s presumptive nominee for president, but at least we know this for sure: Having two influential Democrats force their party to create a compromise platform on which to run for president is a much better problem than the Republicans have as they watch a mad man run unchecked toward the White House lawn while they can only look on in horror.