“I stand here as the leader of my country. Flawed and human, but judged by my political actions, not by my sexual orientation.” 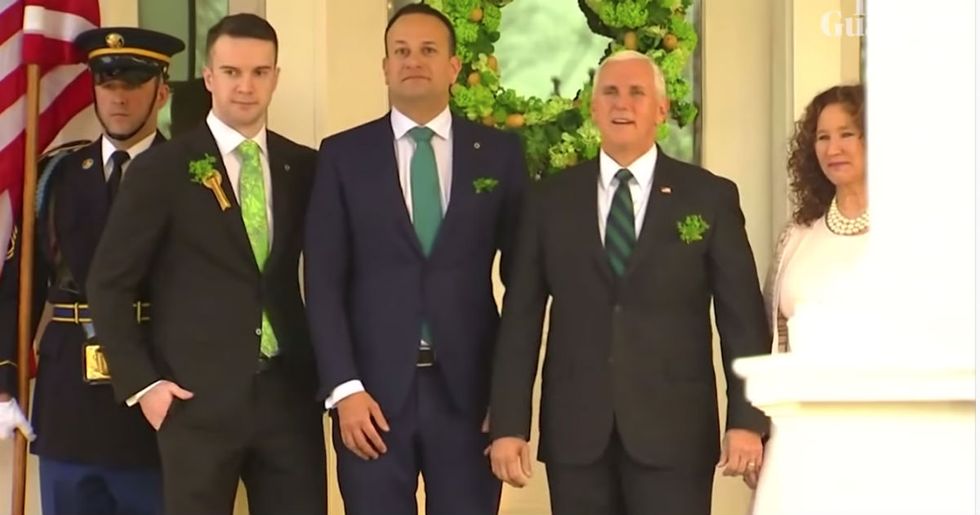 What was Mike Pence thinking? The Vice President is a notorious homophobe whose wife works at a school that bans members of LGBTS communities. But with St. Patrick’s Day around the corner, Pence had the nerve to invite Ireland’s gay Prime Minister Leo Varadkar over for a visit.

How did things go? Brilliantly, if you’re a fan of equality and decency.

Varadkar was in Washington, DC as part of a formal government visit. Before heading over to the vice presidential residence, he issued an incredibly gracious tweet, thanking Pence for his “warm reception.” Side note: Pence’s wife was not in attendance.

Vice President Mike Pence invited me and Matt to his home at the Naval Observatory this morning. It’s great to be b… https://t.co/NCpqOvzWQJ
— Leo Varadkar (@Leo Varadkar) 1552567801.0

It appeared that Varadkar was going to let Pence’s homophobia go publicly unchecked in the name of diplomacy but then something incredible happened.

Varadkar also had an awkward photo op with President Trump. For years, Trump sounded a LGBTQ-positive note in public, even becoming the first Republican to bring a gay prime time speaker to the Republican National Convention in 2016. But since taking office, Trump has viciously pursued and enabled an anti-LGBTQ agenda.

But when reporters started asking Ireland’s freely elected leader about his proximity to someone who still views homosexuality as a sin and actively works to marginalize LGBTQ people, the prime minister didn’t hold back -- offering some inspiring and courageous works while his partner stood by his side.

“I lived in a country where if I’d tried to be myself at the time, it would have ended up breaking laws,” he said in remarks picked up by LGBTQ Nation.

“I stand here as the leader of my country. Flawed and human, but judged by my political actions, not by my sexual orientation, my skin tone, gender, or religious beliefs.”

“We are, after all, all God’s children.”

And he said it all just feet from Mike Pence’s wincing face.

That’s real political courage. That’s being a real leader in the face of opposition. That’s fighting for justice with dignity, courage, and decency.

Mike Pence could learn a thing or two from Leo Varadkar.