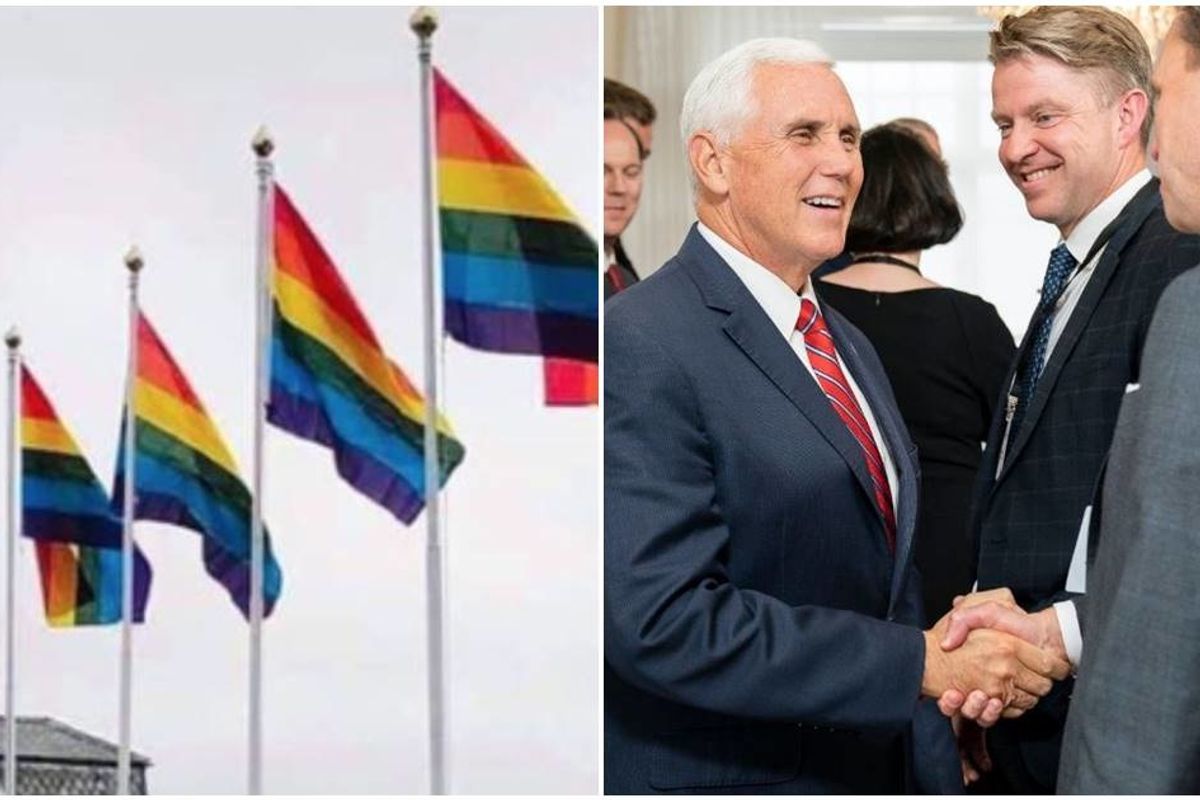 Vice President Mike Pence's political brand is one of a devout Christian who has a long history of supporting anti-LGBTQ policies. Because for some bizarre reason, people are concerned about what people do in the privacy of their own bedroom.

He opposed the bill that allows gays to serve in the military. He spoke at the openly anti-LGBTQ Family Research Council's annual conference in 2018, and as Governor of Indiana, signed a bill into law that allowed people to discriminate against the LGBTQ community under the guise of religious freedom.

He obviously missed the part of the Bible that says "love thy neighbor."

On Wednesday, Pence became the first American Vice President to visit Iceland, a country of just 350,000 people, since George H.W. Bush went to Reykjavík in 1983.

Iceland is one of the most pro-LGBTQ countries in the world. It allows any two people to marry regardless of sex or gender and the Church of Iceland also allows same-sex marriage in its churches. Clearly, Mike Pence would not be a member of this church.

The U.S. still doesn't have any such law on the federal books. If it did, Mike Pence would probably try to have it repealed.

When Pence arrived in Iceland, he was greeted by a barrage of LGBTQ pride flags being flown at the Höfði House where he met with Iceland's president, Guðni Jóhannesson.

The Höfði House is best known as the location of the 1986 Reykjavík Summit meeting of presidents Ronald Reagan of the United States and Mikhail Gorbachev of the Union of Soviet Socialist Republics. That effectively was a step to the end of the Cold War.

RELATED: His remarks got under Mike Pence's skin. So the VP asked to meet. It … didn't work out.

Within the building, the flags of the United States and the Soviet Union are cross-hung to commemorate the meeting.

An office park opposite the historic building also decided to fly rainbow flags for the occasion as well. "We just felt the need to celebrate diversity today and wanted to show that by flying the flags," Ægir Már Þórisson, the company's director, said according to The Guardian.

so at his stop at Höfði (house where Reagan-Gorbachev summit in Reykjavík occurred), @vp was met by this not-so-subtle display and then the mayor said he grieved the loss of the INF treaty that emerged from the summit but was recently withdrawn from by the trump administration pic.twitter.com/89P8nQmupc
— Justin Sink (@justinsink) September 4, 2019

Here's a great example of why I'm proud to be from Iceland 🇮🇸Mike Pence is visiting the country and everyone is outraged. Mayor of Reykjavik, all the biggest firms and companies, everyone, they're all flying the gay flag. All Pence will see everywhere on his visit is gay gay gay. pic.twitter.com/XemgBk7TjU
— Heklina (@Heklina) September 4, 2019

So America's bigot Mike Pence has arrived here in my country, and what does Iceland do? Welcomes him with Pride flags 😂🙌 pic.twitter.com/OJZjp0aE1s
— ★natasja★ (@miss_menorah) September 4, 2019

When Pence met with Jóhannesson, the president was wearing a rainbow bracelet, just like he wore when he met with another massive homophobe, Vladirmir Putin of Russia.

Good on the people of Iceland to proudly display their belief in freedom and equality. Maybe it'll inspire Americans like Pence to one day embrace the same ideas.