John Glenn delivered one of the greatest comebacks ever after a political opponent accused him of never having held a real job. 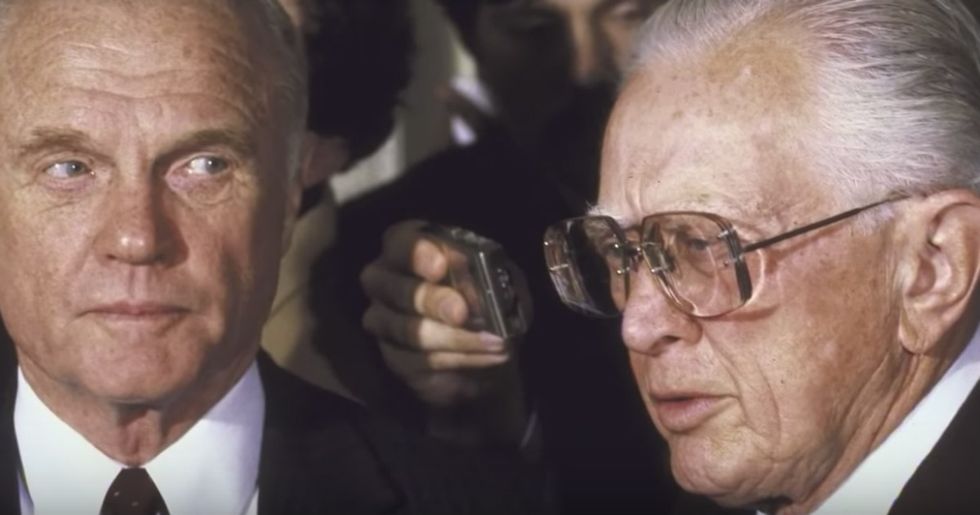 John Glenn literally had the right stuff for the job: One of America’s first astronauts, the first American to orbit the Earth, the first person to pilot a supersonic transcontinental flight across the United States, a war hero, and a U.S. Senator.

He was also the perpetrator of a sick verbal takedown that is the stuff of legend.

After retiring from the military, Glenn decided to take his career of public service into electoral politics. In his first run for public office, Glenn lost in the Ohio Democratic state primary. He tried again in 1974, running against self-made millionaire Howard Metzenbaum.

A few weeks before their primary debate, Metzenbaum accused Glenn of having never had a real job. For some context, 1974 was a time of great political division in America. Public sentiment had shifted against the Vietnam War and Glenn was a career military man. In fact, a seeming advantage had turned so far the other way that Metzenbaum had turned to calling his opponent “Colonel Glenn” on the campaign trail hoping that the military connection would drag Glenn down in the polls.

So, when the day of their debate finally arrived, Glenn was understandably not happy. He waited patiently until the end of their debate when each candidate is permitted to give a closing argument. In his final rebuttal, Glenn went on an absolute tear in the way only someone who has lived a truly righteous life could:

Howard, I can't believe you said I have never held a job. I served twenty-three years in the United States Marine Corps. I served through two wars. I flew 149 missions. My plane was hit by anti-aircraft fire on twelve different occasions. I was in the space program. It wasn't my checkbook; it was my life on the line.

It was not a nine-to-five job where I took time off to take the daily cash receipts to the bank. I ask you to go with me, as I went the other day, to a Veterans Hospital and look those men, with their mangled bodies, in the eye and tell them they didn't hold a job. You go with me to any gold-star mother and you look her in the eye and tell her that her son did not hold a job.

You go with me to the space program, and go as I have gone to the widows and orphans of Ed White and Gus Grissom and Roger Chaffee, and you look those kids in the eye and tell them that their Dad didn't hold a job.

You go with me on Memorial Day coming up and you stand in Arlington National Cemetery, where I have more friends than I'd like to remember, and you watch those waving flags. You stand there, and you think about this nation, and you tell me that those people didn't have a job.

I'll tell you, Howard Metzenbaum, you should be on your knees every day of your life thanking God that there were some men — some men - who held a job. And they required a dedication to purpose and a love of country and a dedication to duty that was more important than life itself. And their self-sacrifice is what made this country possible. I have held a job, Howard!

The rebuttal was a turning point in the race and Glenn not only went on to win that race but to stay in the U.S. Senate from December 1974 until his retirement in 1999. He capped it all off in 1998 by becoming the oldest living person to return to outer space during a NASA mission to test the effects of space travel on aging people.

His speech resurfaced on the sub-Reddit “Murdered by Words” on Tuesday. The community labeled it just the kind of speech the forum was designed for: a truly impressive rhetorical “murder” of an opponent in a verbal joust concerning a pressing issue. As the top commenter on the post observed:

“This is the kind of content we'd like to see coming back. Not shitty one-liners, not bullshit "gottem!" posts, not the endless sea of crap we wade through, not the literally endless ocean of political posts detailing who is talking shit about who in the government, but actual, honest to god Murders.”

That’s because John Glenn was an American hero. He spent his life working to make the planet a better place, even going so far as leaving the Earth to help better understand it. But as Howard Metzenbaum learned, he could also bring you crashing back down to the ground if you pushed him too far.