Transforming an Old Church Into the Sistine Chapel of Skate Parks

We spoke to artist Okuda San Miguel about the inspiration and process behind the Kaos Temple. 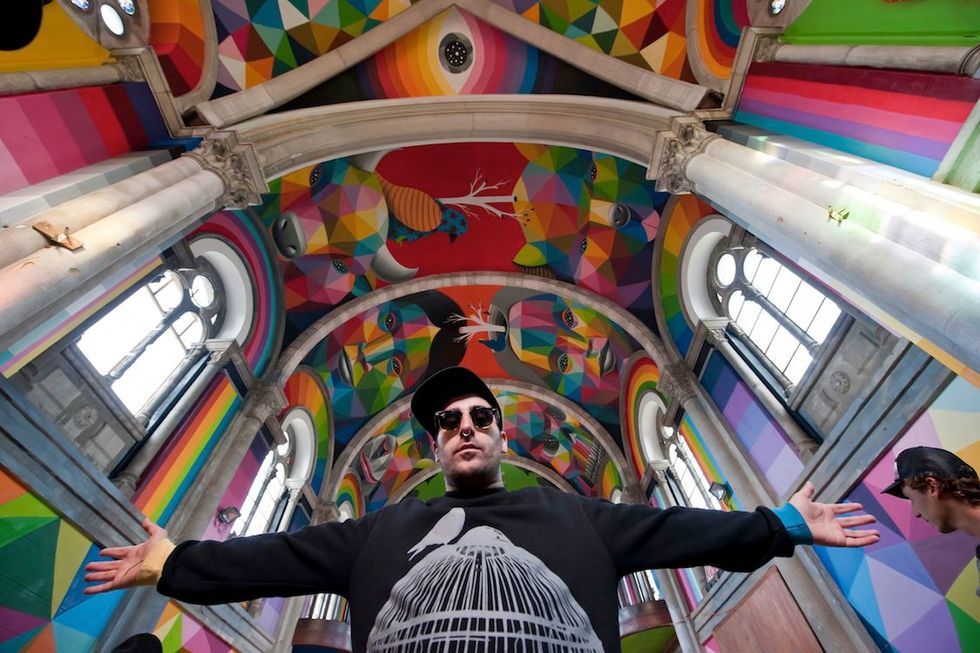 In the Spanish city of Llanera, in the northwestern principality of Asturias, skateboarding is a religion. So much so, in fact, that a collective of skateboarders called the Church Brigade bought a 100-year-old church and converted it into La Iglesia Skate (“Skate Church” in English).

The Church Brigade’s indoor skate mecca caught the eye of Madrid-based artist Okuda San Miguel, known for his brand of vibrantly colored, pop cubism-meets-surrealist art. San Miguel, who works across various media including photography, painting, and sculpture, reached out to the Church Brigade, offering to create a series of murals befitting this pilgrimage site for skateboarders. Being familiar with San Miguel’s work and trusting his artistic vision, the Church Brigade gave him the green light.

Before painting La Iglesia Skate, San Miguel saw a place where skateboard ramps, domes, and stained-glass windows created an already unique type of artistic harmony for the practice of Church Brigade’s “skateboarding religion.” He wanted to enhance this effect. And, in doing so, he created the skateboarders’ equivalent of Michelangelo’s Sistine Chapel fresco; he calls the work, now commonly referred to as Kaos Temple, a “temple of urban art.”

San Miguel tells GOOD that the church “came” to him through the internet. Like the skateboarders, Okuda speaks of Kaos Temple—the place and the project—in near religious terms.

“Maybe it was destiny, maybe it’s because I love this typical architectural surface for painting in art history,” San Miguel says. “I fell in love with it, even more after finishing it. The contrast of my contemporary painting over the amazing classic architecture is incredible.”

The artist says he began thinking about a way to approach Kaos Temple with his manager and the Ink and Movement team. The first step was to launch a crowdfunding campaign to finance the project’s paint and tools, but they also brought in sponsors like Red Bull, Montana Colors, Miller Division, and Socketines.

With funding secured, San Miguel got to work on Kaos Temple’s design. Arriving at La Iglesia Skate without a single sketch, he had only one idea—somewhere he would paint his “Kaos Star” symbol, a colorful and asymmetrical wind rose.

“I started painting and looking for the best composition for each place of the church,” says San Miguel. “I decided to do all of my own iconography: humans, animals, organic items, trees, brick bodies, infinite eyes, skulls, birds, universe, geometric patterns, chromatic circles—everything’s connected between [them].”

With the help of three assistants—Antonyo Marest, Pablo Hatt, and MisterPiro— San Miguel finished the Kaos Temple in seven days. Apart from the symbolic meaning behind his Kaos Star, there is no single political, spiritual, or economic message in Kaos Temple, but rather a broad canvas of many meanings. This is because, as San Miguel explains, Kaos Temple is a retrospective ride through his artwork.

“It talks about love, freedom, existentialism, the meaning of life, communications between modernity and the past, capitalism, and nature,” says San Miguel.

“Kaos Temple does not have a negative meaning but the most positive meaning from the word ‘Kaos,’” the artist explains. “It comes from one of my icons called Kaos Star, an asymmetric star of cardinal points—opposite way and opposite meaning. It comes to say it doesn’t matter where or when you stay, just focus on your goals and believe in your passion. It speaks about freedom, love, and art.”