Inside Trumpsingles.com, The Exclusive Dating Site For Donald Supporters 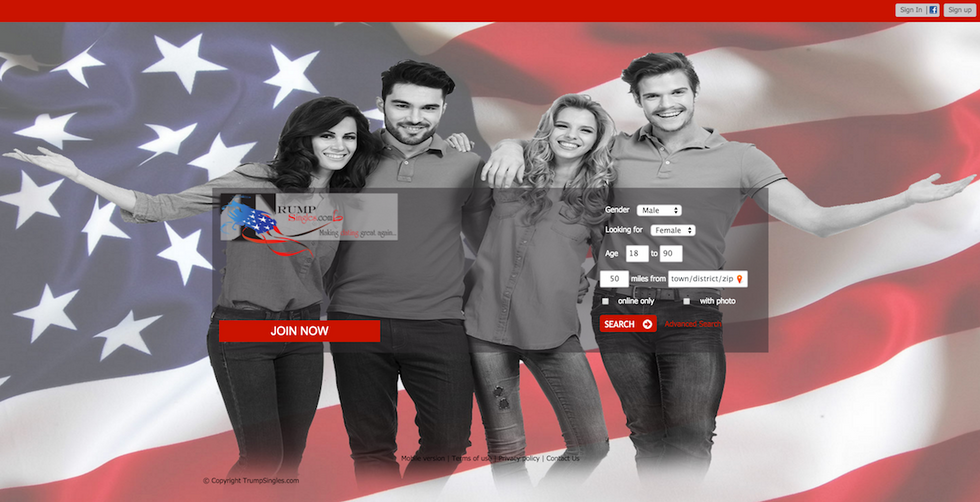 A screenshot of Trumpsingles.com

It’s been quite some time since I last mulled over an About Me section, but Trumpsingles.com was forcing me to enter my personal tastes before logging in. I eventually landed on: “Lives for NFL Sundays. Loves going to the beach and long hikes. Hanging with my family. You know, the usual.” Yikes, I know. But I wasn’t really looking for true love when I joined the new dating site created for Donald Trump supporters. I just wanted to know what it was like inside.

A run-of-the-mill online dating network, Trumpsingles was created by David Goss, a 35-year-old associate producer of reality television from Santa Clarita, CA. After hearing stories of Trump supporters getting ditched on first dates, he built a dedicated social network where fans of the Republican nominee could meet each other and, ideally, find love. To date, 7,000 users are active on Trumpsingles—about 5,500 less than the trailblazing Berniesingles.com, Goss’ obvious inspiration which launched back in February, but the number is growing by the hour.

[quote position="full" is_quote="true"]I very much would like to meet a person with shared values.[/quote]

I asked one user, a Trump supporter from Florida named Patricia Passaretti, how she found the site and why she’s been active on it so far. She said joining up was a no-brainer after hearing about it on Fox & Friends last Thursday. “I have used other sites (eHarmony, Match, Plenty Of Fish) with no success,” she told me. “I very much would like to meet a person with shared values, and I firmly believe that our political beliefs exemplify our core values.”

Harry Reis, a professor of psychology at the University of Rochester who studies social interaction and relationships, has found that Passaretti’s view is common, but it’s one of many filters people use to find mates. “People filter out potential partners on all sorts of dimensions, like religion, hobbies, and whether they like to sleep late or rise early,” he said. “Political preferences are just another one. I don't think this is intended as a shortcut to intimacy—but even if it was, it certainly wouldn't create intimacy. It just rules out one potential source of conflict."

Given our current political climate, the possibility of your candidate of choice becoming a “source of conflict” while dating seems like an understatement. Goss, talking to the New York Post last week, said the need for Trumpsingles emerged from the stigma experienced by supporters due to the candidate’s divisive language and policies. But does the site actually do that?

After I entered the usual information—interests, body type, hair color, smoking and drinking preferences—I arrived at a barebones home page with 140 initial matches. The network’s featured choice for me, a 30-year-old in Brooklyn, was a 67-year-old woman from Wyoming, but I went through the entire list to see what kinds of users were active. Out of 140, I only received three people of color as matches. The age range skewed older, an issue experienced by both genders.

“I've had some communication with men, been hit on by two 60-something men who could be my father, and a couple of younger guys,” Passaretti told me. “I also had the usual jerk comment on a photo telling me to contact him if I want to see nude photos. I immediately reported him and they deactivated his account.”

[quote position="full" is_quote="true"]I had the usual jerk comment on a photo [...] telling me to contact him if I want to see nude photos.[/quote]

So, basically par for the course on any dating platform. “I think the concept is awesome, but the site needs to be tweaked a little and obviously needs to grow,” she added, praising the moderator’s quick response to her abuse complaint.

Trumpsingles uses an old-school model, favored by mid-aughts innovators like Nerve.com, where users purchase credits in order to contact potential mates. On enrolling, I was provided with six complementary tokens to get started. Each private message costs a credit. Saving to your “hot list” costs 25, which seems like a typo. (I asked, but didn’t receive comment from the site’s owners.) Ten credits sell for $2.99, yet 25 credits go for $12.99—some fuzzy math which needs clarification.

Either way, politics-driven dating sites are nothing new. Beyond the afformentioned Berniesingles, there’s LiberalHearts for other leftys. TheAtlasphere, an homage for Ayn Rand, joins LibertarianPassions on the anti-government front. The #NeverTrump movement will love ConservativeDates, which holds it down for more traditional right wingers.

And while the old adage that opposites attract sounds nice, the research of Neil Malhotra, a professor of political economy in the Graduate School of Business at Stanford University, has found these political-leaning dating sites exist for a reason. “Political sorting is comparable in size to sorting based on education and race,” he told me. “Our findings suggest that shared political orientations signal shared values, which may be important in child rearing and general household harmony.”

It’s easy to scoff at Trumpsingles, to mock its inelegant design and odd logo (which I believe owes a lot to the covers of supermarket romance novels) or its nearly-witty slogan (“making dating great again”). But dating is hard enough. How could I begrudge a safe space for like-minded people to meet and explore their deeper chemistry? I certainly didn’t experience any hate while browsing around.

I do wonder, though, what does Trump think? The Republican nominee has yet to comment on the dating platform bearing his name. I’m betting he thinks it’ll be yuuuuge, just like everything else created in his image.