A Conversation With the Seemingly Indestructible Martin Strel

The record-breaking swimmer braves piranhas, pirates, and pollution to raise awareness of the threats facing our waterways. 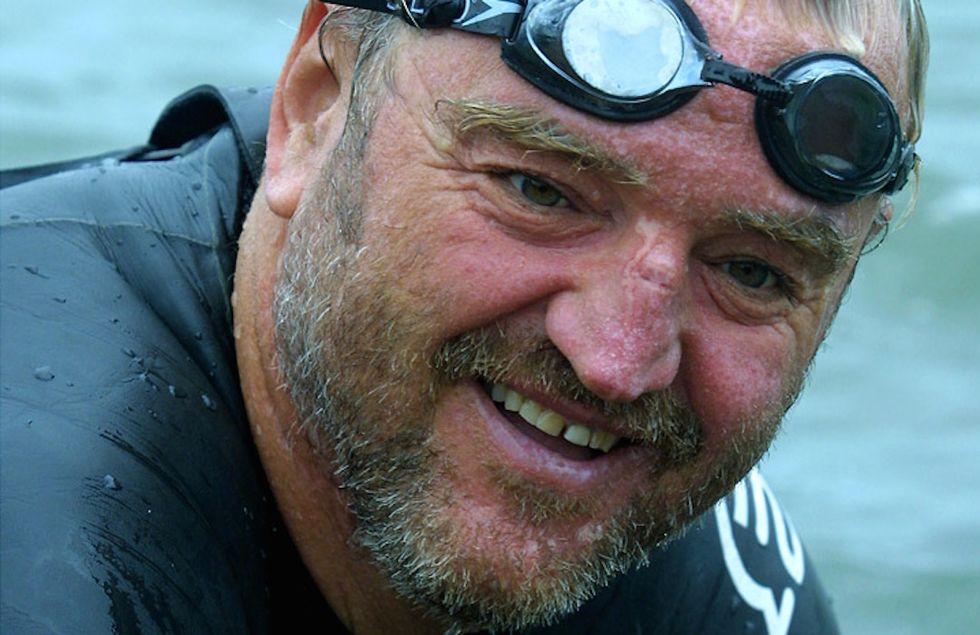 Photo by Borutstrel via Wikimedia Commons

Back in September 2015, just minutes after completing a 2.2-mile swim between Manhattan and the Statue of Liberty, a man named Martin Strel announced his plan to swim around the world. According to Strel, starting on March 22, 2016, he plans to jump in the water and make his way across oceans, canals, and channels across 24,901 miles and 107 nations, stopping only for rest and emergencies on an escort boat. Funded by the marketing firm TDG, this insane endeavor is an explicit publicity stunt—not for some product, but to raise awareness about water pollution, aiming to engage youth, politicians, and fans alike along the way. Yet noble intentions aside, diving into the water and swimming for more than a year still sounds outright mad.

If anyone can pull off this headline-making feat, though, it’s Strel. Born in Mokronog, Slovenia, a small town surrounded by forests, streams, and lakes, he grew up a swimmer, developing a natural undulating stroke (boosted later in life by his shovel-like hands). Strel became a competitive swimmer in 1978 at the age of 24, and spent the next 14 years making a name for himself, before eventually ditching races in favor of trying to swim long distances.

He started in 1992 by swimming the 63-mile-long Krka River in 28 straight hours, and in 1997 he became the first person to swim from Africa to Europe. In 2000, Strel swam 1,866 miles of the Danube River in 58 days, setting a record for distance swimming. In 2002, he took on 2,360 miles of the Mississippi in 68 days; in 2004 he tackled 2,487 miles of the Yangtze in 51 days; and in 2007 he famously conquered 3,274 miles of the Amazon. While in the Amazon, he was attacked by piranhas, infected by tropical diseases and parasites, and lost much of his skin to blisters, leaving him so drained he could barely walk; in the Yangtze, the pollution apparently almost destroyed his liver and left him in need of days of dialysis and weeks of recovery.

Strel does not look like a typical professional athlete, standing five-foot-eleven-inches tall and oscillating around 240 pounds with a noticeable gut and a penchant for massive pasta meals and Slovenian wine by the bottle. You’d never figure it, but some consider him one of the most resilient men and best athletes alive. He keeps a grueling training regimen, sees his fat as a strategic energy store on long swims, and says he enters a robotic, meditative mode in the water.

While Strel insists constantly that he swims primarily for ecological awareness, peace, and global friendship, many question his motivations. In a 2009 documentary on Strel, his son (and manager) Borut mused that the man, who comes off as simultaneously comical on the land and truly awesome in the water, just wants a way to prove his eccentric mettle. And in books by his longtime logistics aid Matthew Mohlke, many have noted speculation by his crew that Strel is driven by deep mental issues stemming from chronic childhood abuse, which he escaped by swimming. He’s a man who talks to himself while underwater, seems to enter life-threatening situations blithely, and indulges in at least mildly magical thinking, and it’s easy to understand why some might think there’s more to Strel’s swims than just promoting environmentalism.

With Strel set to take on the world’s waterways, GOOD caught up with him before his evening training at his current home in Arizona, to better understand the way he thinks about his aquatic adventures.

When you announced your world swim, the details were very cursory. Can you tell us more about how many miles it will be, what your route will be, or how long it will take you?

Yes, you’re 100 percent right. Because 30 years ago, [I] wasn’t so strong as today. And today I’m not afraid … because I know the situations very well. You can have big waves, but if you have good boat, good support, you can survive this. To be mentally strong, you need a lot of experiences working with the right people, and I’ve been working with the right people for years.

You’ve swum long rivers in the past, but those swims were very hard on your body, from what I understand. You came out of some of these rivers needing a lot of treatment and recovery. So if you’re swimming one body of water after another for over a year, what’s that going to do to your body? Are you basically risking your life here?

Yeah. The Danube was pretty clean, even thought the Danube was very polluted river many years ago. Especially in Germany and Austria, it’s [now] much cleaner than tap water. The Danube was [a] pretty good swim—I was tired, I lost a lot of pounds. But then the Mississippi—very hard swim. I got a little sick over there because after Memphis it’s polluted much higher. Then Yangtze, [the] most polluted river on the planet besides maybe Ganges and Nile. I got sick so terribly; the last three weeks I was in hospital every day to get ready for the next day. When I finished the day, it was impossible walking. But I made it … I was happy. When it’s done, it’s done. But the Chinese government didn’t tell me that so many people had died before me trying to swim this river, and many people along the river told me, “Martin, go home, this river is too dangerous, you’re going to die here.”

Then finally, Amazon pollution is not so high even though it’s like a yellow river, a lot of mud inside … this is very dangerous river: tropical diseases, very, very dangerous animals, everything is against you. Even a lot of indigenous tribes, most of them are very friendly, but some of them are not. Then pirates, especially [in the] last part of the Amazon. They were trying to attack [during the] last two weeks every day… at night. They attacked us the last day and [there] was fighting between my security and these guys. Nobody died. It was ok.

There are many stories I can tell you [laughs] so you can understand. To be ready for swims like that, you need good team, good boat, good support. In every country you need contacts with police, with government, with military, with navy, with everyone.

Yeah, and that’s just for one swim—it’s so much work, so much strain on your body. So are you ready to do this for 450 straight days?

But are there any stretches of this trip where you’ll be in, say, two very polluted bodies of water, one after the other, that’ll make it very hard on your body?

My target now is to swim just a little in very polluted rivers. When [swimming the] Nile, don’t touch the river with your mouth … because it’s amoeba inside, and if amoeba gets in your stomach, you’re done. This is most dangerous amoeba for stomach on the planet. And I would like to swim just a little Ganges too, and Yangtze, Huáng Hé, just to make good publicity. Here in America people simply don’t understand what is high pollution. In Egypt, [the Nile] is like garbage between Aswan and Alexandria. These things, they could destroy our planet.

You mention that some governments are excited to have you there. But there are always some countries that don’t like outsiders coming in and telling them that they need to be cleaner. So were there any countries where it was difficult to set up this swim?

Oh, yeah, sure! And many dangerous places too. But everywhere I go, I have diplomatic passport, so this planet is free for me. I don’t need any visa. But you need connections with governments … and you have to be very, very nice. Over [by the] Red Sea, there’s Somalia—these guys are crazy. They don’t respect who you are; they can kill anybody. And West Africa, if you say over there “This country is very polluted” … people don’t like it, even though I’m right. Governments say, “Don’t talk too much. Don’t criticize everything. Say something good and clear this place as soon as possible. We can give whatever you like, but don’t talk so much about this.” You have to be a very good politician for a swim like the one I’m going to do right now.

Which countries or rivers are you most worried about, in terms of water quality and security?

I have to be very careful in Venezuela’s Orinoco and then in Amazon in Brazil—this is pirate area. And between Suez Canal and [the Gulf of Aden] … you have to be very well organized.

More or less I’m going to swim oceans—very, very salty water. Atlantic, Pacific, it’s hard to get sick, even though it’s not clean and in fish you can find a lot of plastic, garbage. But in places like Red Sea and [some big rivers], it’s high pollution. I need on my boat a lot of scientists. These guys must check the water quality every day. This is my target too—to report. People around the world would like to see what the quality is—of the water, the animals, everything.

So that’s one of the things you can do with your swims—providing data. But what other effects do you think you can have, directly, on people’s awareness and treatment of waters?

First, I would like to talk to governments, mayors, finance people. They must change the laws all over the planet. People must be simply punished for [throwing things into the water]. People must pay huge penalties forever. Then people will start thinking about this, people can change their minds. If I say, “This water is terrible, don’t swim in it,” people will say, “Why? What’s wrong?”

Some people feel like water pollution problems are so systemic that they can’t make a dent. Do you really feel you can make an impact? Do you get depressed like other people and worry that maybe there’s nothing you can do to save some of these rivers?

No, no, I’m not depressed. Because I know very well what was [happening] in Europe. It was really like garbage … impossible to swim or to drink [in many rivers]. But in 10 or 20 years you can change a lot. Why is the Danube so clean today that you can drink [it]? [We can do] a lot with punishments—[like] “If you put something inside this river, you’re screwed, and [your] companies can close.” A lot of people don’t like [to institute these rules] … but it is possible. And now it’s coming time to change this [attitude] a little more because today everyone would like to be healthy and live a little longer … water is very important for everyone.

What comes after this world swim? What’s bigger, more motivating than this?

I’m thinking a little different now. I would like to go over to the South Pole, to the North Pole, see what’s going on, swim in the world’s coldest water too. It’s not important, the distance. The target is to raise a little more awareness.

If I put my body through the things you put your body through, I’d be dead. So do you feel like because you can do these swims, you have to—that you need to raise awareness?

I’m strong. I can swim another Amazon, maybe something more. It’s not a very big deal for me, especially in my mind. I’m mentally stronger than I was before, even if physically I am pretty [much] the same. But my target is just to raise much more awareness on this planet. I don’t know everything, but I know a lot—I think I am one of the people on this planet who really knows what’s going on with water today. My target is to see happy fish swimming in the water.