The Apollo 11 mission was so risky, Nixon had a speech ready in case the astronauts were left to die on the moon.

“There are just too many things that can go wrong.” 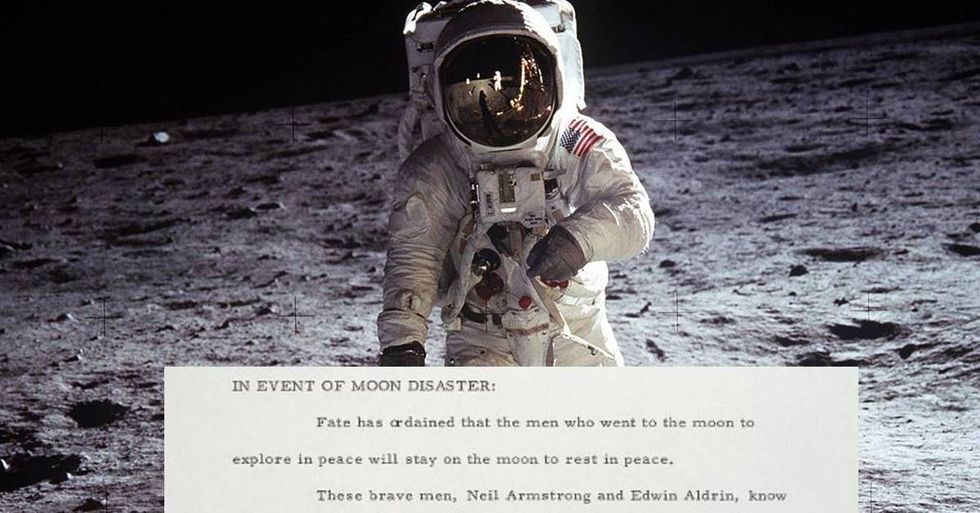 The Apollo 11 million to the moon was historic for being an incredible feat of engineering and a first for the human race. It was also an incredibly risky endeavor in which the three astronauts’ lives were in peril.

Years later, astronaut Neil Armstrong said he thought he had “a 90 percent chance of getting back safely to Earth, but only a 50-50 chance of making a landing on that first attempt.”

“I think we will escape with our skins,” astronaut Michael Collins wrote, “but I wouldn’t give better than even odds on a successful landing and return. There are just too many things that can go wrong.”

The mission occurred two years after the failed Apollo 1 disaster in which three astronauts were burned alive in a cabin fire during a launch rehearsal test.

The risk was so real the White House had contingency plans in case the astronauts were abandoned on the moon. In the days before the mission, Apollo 8 astronaut and White House liaison Frank Borman called President Richard Nixon’s speechwriter, William Safire, and asked him to prepare a speech in the event of a disaster.

“If they couldn’t [launch], and there was a good risk that they couldn’t, then they would have to be abandoned on the moon, left to die there,” Safire told NBC.

“Mission Control would then have to — to use their euphemism — ‘close down communication,’ and the men would have to either starve to death or commit suicide,” he said. “And so we prepared for that with a speech that I wrote, and the President was ready to give that.”

Thirty years after the successful Apollo 11 mission, the “IN EVENT OF MOON DISASTER” speech was released to the public.

via The National Archives

IN EVENT OF MOON DISASTER:

Fate has ordained that the men who went to the moon to explore in peace will stay on the moon to rest in peace.

These two men are laying down their lives in mankind’s most noble goal: the search for truth and understanding.

In their exploration, they stirred the people of the world to feel as one; in their sacrifice, they bind more tightly the brotherhood of man.

In ancient days, men looked at the stars and saw their heroes in the constellations. In modern times, we do much the same, but our heroes are epic men of flesh and blood.

Others will follow, and surely find their way home. Man's search will not be denied. But these men were the first, and they will remain the foremost in our hearts.

For every human being who looks up at the moon in the nights to come will know that there is some corner of another world that is forever mankind.

PRIOR TO THE PRESIDENT'S STATEMENT:

The President should telephone each of the widows-to-be.

AFTER THE PRESIDENT'S STATEMENT, AT THE POINT WHEN NASA ENDS COMMUNICATIONS WITH THE MEN:

A clergyman should adopt the same procedure as a burial at sea, commending their souls to "the deepest of the deep," concluding with the Lord's Prayer.