Muslim dad’s response to his daughter wanting to remove her hijab goes viral.

She was correcting a lot of incorrect assumptions about Islam. 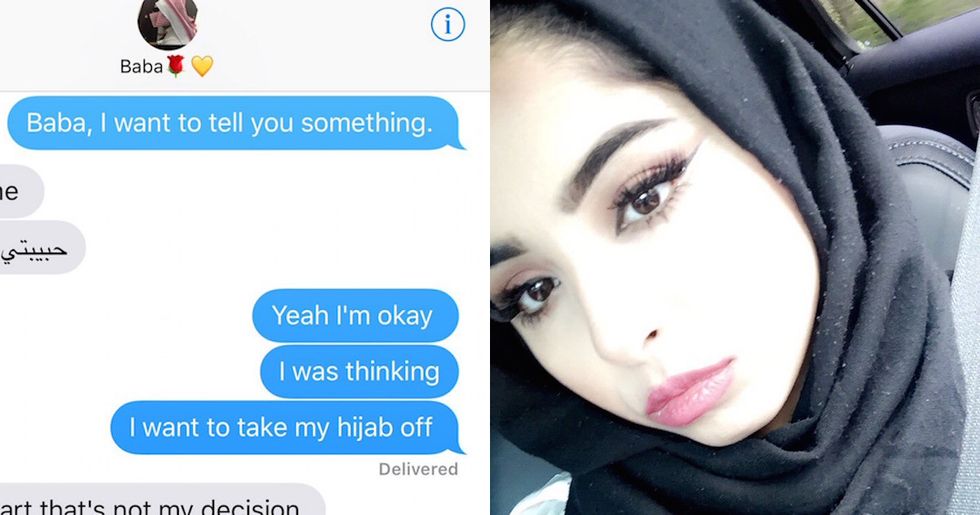 Lamyaa is a 17-year-old Muslim high school student from Pennsylvania who wears a traditional hijab.

She was recently participating in a group chat started by one of her friends when the subject of Donald Trump came up. “I personally had very strong views considering the presidency did impact me because I am an Arab, Muslim woman,” she told BuzzFeed News.

After Lamyaa criticized Trump’s policies, a “friend of a friend” in the group chat started spewing hate speech. He commented that she “couldn’t take that scarf off or [her] dad would beat” her.

Oh, he also called her a bitch.

Most of us would’ve taken this opportunity to furiously unleash an ALL CAPS tirade against this bigot. Lamyaa instead used it as an opportunity to educate.

First, she reached out to her dad, who lives in Saudi Arabia, and asked him about potentially removing her hijab.

This was his wonderful, moving response:

“Sweetheart that’s not my decision to make,” he wrote. “That’s no man’s decision to make. If it’s what you feel like you want to do, go ahead. I’ll support you no matter what.”

She shared their text exchange on Twitter in an effort to dispel the “mentality a lot of you seem to have” about Islam. It quickly went viral. Pretty sure this is exactly what Michelle Obama meant when she “when they go low, we go high.”

The teen later explained she doesn’t actually plan to remove her hijab. And Twitter is fully supportive.

DONT TAKE IT OFF BABE.

Unfortunately, a lot of people on Twitter also misunderstood the point of Lamyaa's tweet. She clarified that this is her experience with the hijab, and not everyone’s. Many are praising her dad for being the greatest of all time.

if my future husband isn't this supportive of our children he's not my husband https://t.co/zIa5dYMfO5

Your dad is perfect and so are you

also, for those of you scared of the text in arabic, it says "are you okay, my love?" so don't sweat it https://t.co/MRBfjF40to